You are at:Home»Industry Insights»It’s Splitsville in Palo Alto

In a press release issued on October 6, HP made it official—it will be splitting into two organizations at the end of 2015’s fiscal year. The company identified names, with printers and PCs forming “HP Inc.,” and the remainder (think S’s—servers, storage, services) to be called “Hewlett-Packard Enterprise.” And it was also revealed that the new entities’ leadership would include Deion Weisler, as president and CEO of HP Inc. Mr. Weisler is currently is executive vice president in charge of PCs and printers, so this seems to bode well for a smooth transition.

Of course, HP is trying hard to make this decision seem like a plus, and so far it seems pleasing, if not surprising, to Wall Street and other analysts, who have been suggesting (or anticipating) such a move, or a variation thereof, for years (for example, see Jim Lyons Observations, “Spin-Off Spinning,” from December 2012). Reflecting the “de-synergy” from the split, HP’s stock price is up on the news. The calls for a breakup in some form go back quite some time, all the way to the HP/Compaq acquisition struggle in 2001 and 2002, though the split off then proposed was just the highly profitable and at-the-time still-growing printer and supplies business. More recently, of course, it was previous CEO Leo Apotheker, who proposed putting the PC group on the block—a major factor resulting in his ouster after just a year—and something Meg Whitman, as new CEO in 2011, dismissed outright as a bad idea (or put on hold, in hindsight). 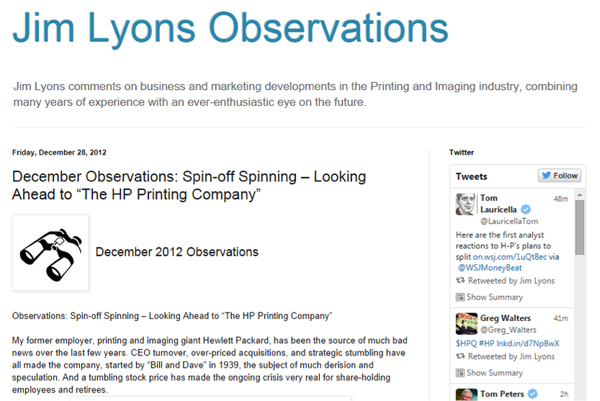 As a long-time HP employee and blogger/analyst following the company’s printing and imaging business since leaving at the end of 2005, I can attest to long-term widespread pride in the printer unit’s independent spirit, so having that recognized via this split must be being greeted with at least a certain amount of cheer. This would be despite the relative popularity of Whitman, at least as compared to the last few CEOs, and the propensity to believe her vow of “better together.” It’s too soon to get a reading, but I would guess the move is being greeted positively here in Boise—LaserJet headquarters—and in other printing units.

Not “Consumer” and “Enterprise” Despite Names

In an early morning interview with CNBC on the day of the annoucement, CEO Meg Whitman made the case that three years into her tenure, this was the right time to make the move from her strong “better together” stance, to two nearly equally sized entities that will be taking on their respective markets in a more nimble fashion. As for those markets, despite one of the new company names including the word “Enterprise,” the move is being carefully positioned as not a “consumer versus enterprise” split. Obviously, PCs and printers are sold into small, medium, and large businesses in great numbers, and in fact the consumer side of the printer business, as reported in the company’s quarterly earnings, has been the weakest performing portion of that business line. And what of managed print services (MPS)? This “growth area” for printing is, as the label describes, part “print” and part “services,” so despite the declaration it will reside with HP Inc., one big question is will that make sense in the long run? Or could we see the IT Services branch of HP Enterprise “compete” by launching their own equivalent, with the freedom to recommend mixed fleets?

And one last (early) thought on the new name for HP’s PC and printer business. As I started to record these initial thoughts, I found my spell-checker had turned “HP Inc.,” the moniker for the new PC and printer business, to “HP ink.” Most are aware that ink, toner, and other supplies dominate printing and imaging financial numbers, both in revenue and especially in profits. Much of the remainder of the current HP remains margin-challenged, while supplies, even while regularly reporting quarterly revenue percentage declines (in the single-digit range), is a critical part of the HP profitability picture. Looking ahead to the two-entity era, it will be interesting to see just how Hewlett-Packard Enterprise fares when its cash cow is on the other side of the fence!

Jim Lyons has been writing, analyzing, and blogging about industry developments since 2006, after leaving a long-term stint as a marketing and program manager in HP’s Imaging and Printing Group. In his monthly Observations column, he comments on business and marketing developments in the printing and imaging industry, combining many years of experience with an ever-enthusiastic eye on the future. Lyons is also a faculty member at the University of Phoenix, teaching marketing and economics at its school of business, and is a regular contributor to both The Imaging Channel and Workflow. Follow him on Twitter @jflyons and read more Observations from Jim Lyons at http://www.jimlyonsobservations.com/.