You are at:Home»Industry Insights»No Love for Printer Companies on Wall Street

This is the way the world ends
Not with a bang but a whimper.
—T.S. Eliot, “The Hollow Men”

For some time now, financial analysts and investors alike have been none-too-enthused about the prospects of printer/copier companies. Then, on July 12, Lexmark sparked new concerns about the outlook for such firms when it announced that its second-quarter results would not meet expectations.

Printer/copier companies will begin revealing quarterly financial results starting this Friday, when Xerox will report its results for the second quarter. Many expect that printer/copier companies will continue to report that their printer and supplies businesses are waning. HP, which is also facing challenges in its traditional PC business, will be the last printer OEM to report until the next round of quarterly results—the firm’s results announcement for its third fiscal quarter is scheduled for August 22. Will there perhaps be companies that buck the overall downward trend? Perhaps. Will there be market bright spots? No doubt. But the halcyon days appear to be over for those printer OEMs that are largely dependent on revenue from printer hardware and supplies.

Lexmark said it was seeing “weaker than expected demand,” particularly in Europe. The firm also noted it expects to see an unfavorable impact from currency exchange. The company seemingly does not expect much improvement in the second half of the year either. Lexmark said, “Looking ahead, the company expects these same factors to impact the second half of 2012 and will provide an update on its full year 2012 outlook on the company’s upcoming earnings conference call scheduled for Tuesday, July 24, 2012.” 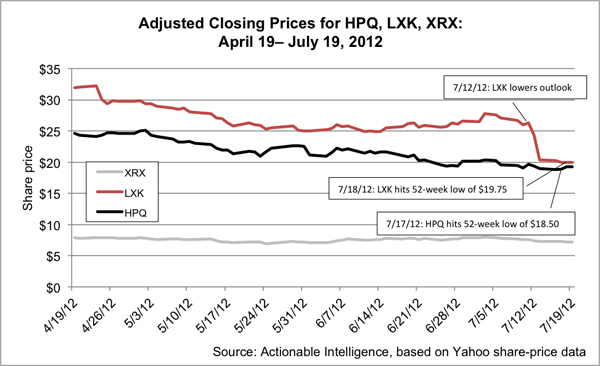 Xerox’s share price, too declined by 22 cents, or about 3 percent, on July 12, following news of Lexmark’s outlook.

Barclays Capital analyst Ben Reitzes cut his rating and price target on Lexmark, cut his price target on HP shares, and said that the market in which those two firms and Xerox are focused is in decline.

The rise of managed print services (MPS) and increased usage of mobile devices in commercial environments are hurting print volumes on the margin. In fact, the very goal of MPS is to consolidate printer fleets significantly, driving more volume to fewer midrange printers, strategically placed and configured to manage costs. If every printer vendors/channel partner drives this strategy, printer industry unit volumes have no choice but to contract. The casualties of this MPS shift are entry-level business lasers and inkjets, as well as high-end copier/printers.

And, of course, printer OEMs are plagued not only by MPS but also by consumers’ and business’s increasing reliance on alternatives to the printed page, such as tablets and other mobile devices.

Actionable Intelligence will be covering OEM financial results in detail over the next few weeks. However, if the media and financial analyst coverage to date is any indication, much of the news may be of the gloomy variety.

I am feeling more optimistic about third-party supplies firms being able to take advantage of the rise of MPS to grow their businesses. Many aftermarket companies are working to grow their share of the color market, and we have seen lots of exciting new third-party color products, some for OEM’s latest and greatest hardware designs. Moreover, the overall focus on cost cutting in businesses and in many homes is a boon for third-party consumables vendors, which can use their products’ cost advantages to win over new customers. That said, farther down the road, it is hard to see how remanufacturers and compatible makers can avoid being impacted by the same pressures from declining print volumes now plaguing OEMs.

Tell us your take on how the printer and supplies business is faring these days. Will third-party supplies vendors be insulated from an overall market downturn? Share your thoughts by commenting below. You can also email me privately at editor@action-intell.com.