Much as Apple helped lead the smartphone and tablet revolution transforming so much of the high-tech industry these days, the firm’s chain stores are inspiring other companies to open their own locations, including two firms with long heritages in photography and printed output. On January 15, Canon Canada announced the opening of Canon Image Square, a “Canon Experience Centre,” in Calgary, Alberta, Canada. Meanwhile, at the Consumer Electronics Show (CES), Polaroid announced that it plans to open ten Polaroid Fotobar “experiential” retail stores in 2013. Numerous industry articles immediately labeled both stores as Apple-like.

The reason why both firms, one a digital photography and printer hardware giant and the other a twice-bankrupt instant film camera company, are looking to Apple stores as a model is clear. As pointed out in a recent AllThingsD article, Apple’s retail stores bring in more money than any other U.S. retailer on a per-square-foot basis. The data comes from RetailSails 2012 Chain Store Productivity Guide, which puts Apple Store’s sales at $6,050 per square foot, twice as much as the next closest retailer, Tiffany & Co., with sales of $3,017 per square foot. As the AllThingsD article states, “Today, Apple has about 390 stores worldwide and plans to open another 33 or so next year. And they are taking in money hand over fist.”

The experiential focus of the Canon showcase and the emphasis on the expert staff in this 6,600-square-foot location are reminiscent of Apple’s stores. Nevertheless, the Canon Image Square location in Calgary is not a retail store per se. Instead, it is designed to showcase various Canon technologies and allow visitors to interact with technology and business consultants. Visitors are then directed to make a purchase “through authorized local dealers or direct from Canon.” Along with featuring Canon digital cameras, digital SLRs, camcorders, lenses, and accessories, the Canon Image Square location in Calgary will feature printing products such as PIXMA inkjet printers, imageRUNNER ADVANCE MFPs, and  imagePRESS solutions. 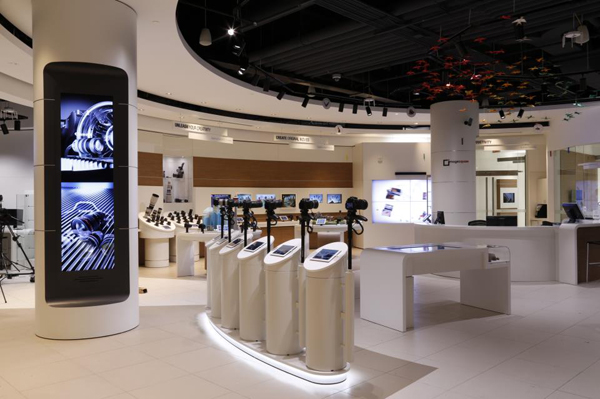 A look inside the Canon Image Square in Calgary

It is unclear at this point if the Canon will be opening more Canon Image Square showcases in North America, and, if so, if they will eventually handle retail transactions.

It is important to note that while the Calgary location may be the newest, highest-tech of the bunch, the Canon Image Square concept is not new. Canon has an extensive chain of 93 Image Square stores in India. Canon indicates that at these stores, “customers are able to handle Canon digital cameras and printers to experience their performance and ease of use before purchasing them. With knowledgeable and attentive staff on hand to answer questions about the products, Image Square has gained a reputation for trustworthiness and become a popular shopping destination.” By the end of 2014, Canon India plans to open 300 stores in 150 cities in India. So, while the Canon Image Square stores in India are more traditional retail locations, they have the same emphasis on customer interaction and well-trained and knowledgeable staff as the Calgary store.

Now that Canon has had success with its retail store chain in India, the firm would appear to be looking to replicate this success in other world regions. According to a January 16, CNET Australia article, each regional Canon sales and marketing company makes such decisions independently, so it may be that Canon Canada is the only firm willing to dabble in the Canon ImageSquare experience for now. Still, we imagine that should the Canadian location prove a success, we may see Canon Image Square stores elsewhere. Canon Rumors indicates that the Calgary store will be followed by others worldwide. So the verdict is still out on whether this will become an important channel for Canon photography, imaging, and printing products.

Polaroid’s plans for its Fotobar retail chain are more transparent. The firm indicates that it will open its first 2,000-square-foot store in Delray Beach, FL, in February, with at least nine other stores set to open this year, including in New York, Las Vegas, and Boston. While the Canon Image Square location is about experiencing a broad range of Canon technology, the Polaroid Fotobar stores are narrower in focus. Specifically, they sell high-quality photo prints on various substrates for display as art.

Photo art on display at a Polaroid Fotobar

In an ironic twist for the one-time photography giant, the new retail concept takes as its premise the fact that a growing number of photos are now not captured on cameras at all but on smartphones and other camera phones and that customers’ favorite images may reside only on social media platforms. The goal of Fotobar stores is to allow customers to “liberate” these photos and, through the help of experienced staff, transform these images into high-quality art, including posters, framed prints, and photos printed on canvas, aluminum, lucite, acrylic, and bamboo. The firm’s Polaroid Fotobar website has information on products types and pricing.

Polaroid indicates it has a “patent-pending proprietary technology [that]will allow in-store customers to select their favorite pictures on their camera phones and wirelessly transmit them to one of the store’s bar-top workstations for quick and hassle-free ordering within seconds.” The firm indicates its platform also allows customers to upload photos from Facebook, Instagram, Picasa, and several other platforms. “Phototenders” help guide customers through the process of transforming the image into art and help with image contrast, red-eye correction, brightness, and filters. Once the desired image is tweaked and the desired substrate and size is selected, an order is placed and the end result is shipped to the customer within 72 hours from a manufacturing facility. The exception is some poster products, which can be printed on-site.

Customers can also order the same products online via the Polaroid Fotobar website, www.polaroidfotobar.com. The photo site is similar to others of its ilk, although it does have a handy feature letting you know whether the photo quality is sufficient for the end product and numerous filters (a la Instagram).

Polaroid is essentially a licensing company these days, manufacturing nothing itself. For example, back in 2009, the firm granted the Summit Global Group of companies the right to produce and distribute Polaroid-branded digital still cameras, digital video cameras, digital photo frames, and Polaroid PoGo mobile products worldwide.  And that is the case with the Polaroid Fotobar stores as well. According to Inc. magazine, Fotobar is a standalone start-up led by entrepreneur Warren Stuhl who struck a licensing deal to use the Polaroid name in exchange for a percentage of store sales.

The Polaroid Fotobar concept is interesting. That said, although the press release describes camera phone images as “trapped,” that is not strictly true. It is certainly possible for photographers to accomplish much the same thing that the store is offering on their own via various popular online photo services and specialty sites for producing prints on some of the more unusual substrates that the Fotobar stores offer. However, the firm is astute in its recognition that transforming one of these images into a high-quality print is “neither easy nor fun.” The Fotobar store’s real value-add is in that it will display examples of prints on various substrates for end users to examine and trained staff to help ensure the end result meets the customer’s satisfaction. The problem for the start-up will be in whether printed images, rather than fancy gadgets, hold enough allure to get customers in store and shopping and if it can proceed with its rollout into other locations. If not, it is theoretically possible for Fotobar to survive as an online photo service, but it would be a long shot.

We will keep an eye on what Canon is doing with its Image Square concept stores now that they appear to be moving from outside India to North America. It would be interesting to see if an interactive store that made Canon products seem more aspirational and sexy could boost sales in a meaningful way, as the Apple stores have done for Apple.

That said, we suspect that while we may see Canon open other select Image Square locations, we won’t be witnessing a massive rollout of hundreds of stores worldwide. The Calgary store is directing customers to authorized dealers or Canon Direct, but by making it that much more challenging for customers to make a purchase, there is a risk of losing sales. It is hard to see Canon moving forward with rolling out numerous showrooms rather than retail locations, and if Canon were to announce its own chain of retail stores it would have to worry about maintaining relationships with its current channel partners, including many in retail. Canon must presumably reassure these partners that it is not about to go into direct competition with them or risk losing shelf space. Moreover, a massive store rollout would be a hugely expensive endeavor, and the returns would be uncertain. After all, consumer interest in tablets and other mobile devices is increasing, while interest in digital cameras and printers appears to be waning.

But what do you think, readers? Do you expect a Canon Image Square or Polaroid Fotobar store to pop up in a mall near you, next to your local Apple store? Why or why not? Comment below and let us know what you think.