I have written about my low print volumes in the past, so I won’t again bore you with the details of how and why my print volumes fell off a cliff (see “Confessions of a Former Tree Killer”). Suffice it to say I print an embarrassingly small number of pages, especially for someone who works from a home office and covers the printer and supplies industries. My adoption of mobile devices has not spurred me to print more. Unfortunately, there are lots of folks like me. You inkjet OEMs already know this.

But there exists in my household some individuals who actually like printed output, are extremely wasteful in their habits, and care naught about issues such as cartridge costs, the cost of printing, and whether printing in color costs more. They are my children. While many have bemoaned the fact that young people aren’t printing, very young people—children—are generating printed output. You inkjet companies already know this, too. Earlier this year I chatted with Marvin Gross and Erin Sweatman, both product marketing managers at HP, about HP’s print apps, now dubbed HP Printables (see “HP Looks to Drive Printing with Changes to HP Printables”). The most popular products? Coloring pages and crafts.

Because kids like to print coloring pages and other craft-type applications, you printer OEMs are increasingly marketing consumer inkjets to people like me, in other words moms. That is a mistake.

Let me tell you why. It boils down to this: I don’t really want to print. My kids do. You need to cut out the middleman (middlemom?).

I am totally serious about this idea: make an inkjet printer for kids. It’s good for me, in every way except financially, and it is good for you, which is financially.

Here’s why you need to cut out the middleman. By putting mom in charge of controlling what is printed you have put a harried, preoccupied, and sometimes cranky stumbling block in front of getting kids the output they want. 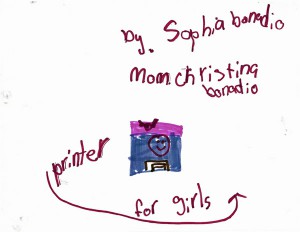 A helpful artist rendering of “printer for girls”

Here’s something you OEMs may or may not know. While many children, including mine, consume paper in reams, oftentimes they are consuming that paper as is—before you can get any of your ink upon it. That is because when moms like me cannot print whatever coloring pages or projects their offspring are demanding, we hand our children a stack of white sheets and crayons and say something like, “Why don’t you draw me a cat?” (or in this instance “a printer”).

Now making a printer for kids won’t solve this problem completely. Kids will always want to draw and express their own creativity, and obviously parents should encourage this. But we are talking about your goals, inkjet OEMs. For you, every page doodled upon is a page wasted. But all this could change if you put kids, not moms, in charge of printing.

Here’s something else you OEMs may or may not know. Children’s desires for printed content are ephemeral. Blink and the moment is gone.

Often my oldest daughter will ask me to print every printable Halloween decoration I can find or something more specific like a coloring page of Princess Anna of Arendelle but only if it has Olaf in it. But life intercedes. Someone throws up on me. There is a diaper to change. I have to cook dinner. Someone falls and scrapes a knee. There are temper tantrums and tears. When one kid is asking for a coloring page from the latest Disney film and the other is trying to flush her socks and pants down the toilet, the coloring page gets short shrift.

By the time I fix whatever disaster was preventing me from attending to my child’s printed output needs, those needs are gone. Rather than wanting to color that specific coloring page, my child is blowing really loudly into a recorder, dancing, or drawing on blank white paper. That page, those pages, you could have put ink upon are gone.

Sure, I know I could schedule and deliver content using HP Connected or the like, but again, children’s desire for printed content is ephemeral. How do I know at say 2 o’clock that my kid will want some very specific type of printed output at 6 o’clock? I don’t. 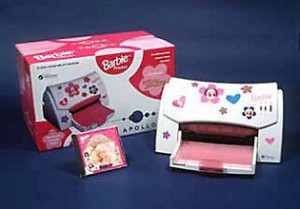 The “Barbie” printer in all its glory!

So make a printer for kids. Let them do their own printing as the whim strikes. I know, I know. Some of you tried making printers for kids back in the day, and it didn’t go so well. For example, in days of yore, HP’s Apollo subsidiary made some pink “Barbie printers” with stickers children could apply to personalize their printer. Barbie printers soon faded into obscurity. But I am not talking about just another pink printer.

Printers are different and potentially more compelling for kids now than they were back then and here’s why: there are web-connected printers and apps. Many of you have done a great job of making apps for kid-friendly output, but you aren’t putting them right in front of kids. Build kids a web-connected inkjet printer with a big touchscreen. Really big. After all, the goal is to get kids interacting with all the apps you have available. Preload the printer with lots of kid-friendly apps accessible right from the touch screen.

Obviously you will have to make these printers easy to use. Make them as tablet-like in operation as possible—something many of you are already doing, although not necessarily in the consumer inkjet segment of the market. Trust me, kids will like this and catch on quickly. My two-year-old used my iPad to find an iTunes radio channel called “Crazy Bitch” the other day. That is not a feat I could replicate.

Yes, I know the big touch screen adds a lot of manufacturing costs. But here’s what you don’t need on a printer for a kid: an ADF, faxing, or even duplexing. You can probably even get away with a print-only model and maybe charge a bit more for a “deluxe” print/scan version. You can reuse existing print engines and consumables. 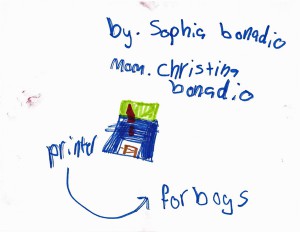 Another helpful artist rendering of “printer for boys.” Note that Sophia clearly wants to emphasize who should get credit for this great idea.

You can make the printers pink or blue or whatever “fun” color scheme you come up with, but then again you don’t have to as long as you make the printer look cool. Basic colors, after all, didn’t impede the popularity of the iPad among kids. You just want the printer to look good enough for a child’s bedroom or playroom. (Note, however, that the artist who produced the sketches for this article disagreed and felt that printer OEMs should help reinforce gender-based stereotypes regarding color preferences.)

You might want to add a prominent “print for a friend button,” and let kids select a number of friends for whom they’d like to print. After all, you want them to print more than one page as often as possible, right?

Now while kids won’t worry about cost per page, parents may (or may not) feel differently. I suspect many moms are willing to pay 20 cents or more for a page for color output if it means one kid is happily occupied while they can tend to the screamer. That said, kid-oriented printers would be perfect for a program like Instant Ink that will allow parents some measure of control over print costs. In any case, make it easy as possible for parents to elect to automatically reorder supplies as needed to ensure the printer is always supplied with ink. Kids won’t check ink levels, and you don’t want those printers to run out of ink. Just keep the ink to kids’ printers a-flowing seamlessly.

Advertise the printer on some of the many cable television channels for children. I have no idea what it costs to buy a 30-second slot on “The Hub,” for example, but from what I have seen of the advertising on such channels, my guess is “not a lot.” We’re not talking Superbowl ad money. This should not come as a surprise, but 90 percent of the toys I am asked to purchase are advertised on such channels.

Charlie Brewer had a cynical but compelling idea when we were chatting about my desire for a kids’ printer earlier. You can easily incentivize children to consume more ink. Offer them the chance to earn prizes for printing a certain number of pages or using a certain number of cartridges. Delightfully wicked, no?

When you have done all this, send me a printer for free. Also, my daughter would like a pony in compensation for the artist renderings of the printer prototypes shown above.