Earlier this month, Funai Electric Company announced what, at first blush, seems to be a truly terrible idea: it is going to sell Kodak-branded consumer/SOHO printers and consumables.

Maybe that is too harsh a judgment. After all, it is not a terrible idea for everybody involved. It is a pretty good idea for Kodak to license its brand name in this way. Having exited the consumer/SOHO inkjet hardware market itself, why shouldn’t Kodak bring in some money by licensing its name to a company that is foolish enough to do so?

Again, maybe that is too harsh. After all, I can almost see why Funai might want to do this.

Funai manufactured Lexmark’s inkjet hardware for years, so when Lexmark exited the business (see “Lexmark Inkjets: Requiescat in Pace, Part I and Part II”), it was a big blow for Funai. Funai scooped up Lexmark’s inkjet assets, including what Funai then deemed the highly profitable inkjet cartridge business (see “Lexmark Will Pocket $100 Million on Sale of Inkjet Business to Funai”). As industry analyst Tom Ashley opined, it is pretty likely that Funai was able to recoup this investment after about 15 months (see “Inkjet Technology on the Cheap: Lexmark’s Deal with Funai”).

However, selling Lexmark inkjet consumables is not a viable long-term strategy given that the installed base of Lexmark inkjets is declining precipitously. Indeed, Funai recognized right away that it would have to do something further with the Lexmark inkjet technology. At the time of the deal with Lexmark, Funai said it would develop and grow the business by introducing its own inkjet printers and supplies in order to “expand its business going forward sustainably.” But that was a couple of years ago, and so far we have seen no signs of Funai-branded products penetrating the market. Time and time again, the consumer/SOHO inkjet business has proven to be one tough nut to crack.

Funai might very well feel that a well-known consumer brand, especially one that has been associated with inkjet printing products in the past, might give it what it needs to make inroads into this tough market.

One problem with this line of logic is that the Kodak brand isn’t what it once was. At one time, Kodak was one of the most widely known consumer brands, but some of the shine has come off that brand name. The company’s financial troubles were well publicized. The public witnessed the consumer portion of Kodak’s business fail and saw the Kodak name taken off iconic places like the Kodak Theatre (now the Dolby Theatre) and Disney’s theme parks (Nikon took over that prime real estate).

Moreover, similar to Lexmark’s inkjet endeavors, Kodak’s consumer inkjet experiment ultimately was a failed one that had disastrous consequences for the firm.

This might reasonably leave one wondering why Funai might believe it can marry one failed inkjet experiment to another and expect a more successful outcome. In my view, to have any chance of success Funai is going to have to do something bold or unusual.

What Will Funai Launch?

Actionable Intelligence is hard at work on a new report on the U.S. inkjet market. (Contact cbrewer@action-intell.com for more information on this report.) I wanted to see what some of this data, as well as Actionable Intelligence’s past coverage of Lexmark’s inkjet lineup, might reveal about what a Funai-built, Kodak-branded inkjet might look like and the market segments in which it might reasonably compete.

While Lexmark’s inkjet technology brings to mind expensive integrated inkjet cartridges used on ultra-low-cost inkjets circa 2000, it would be pretty foolish for Funai to launch this sort of device. In general, although there are customers for such products, these inkjets aren’t doing well in either developed markets or in developing regions. Moreover, it is all but impossible to make a profit on such machines.

So let’s assume Funai is looking higher up the inkjet ladder, beyond entry-level devices. Let’s also assume the firm’s focus will be on the all-in-one category rather than the declining single-function inkjet market. Most inkjet vendors are focusing more on the SOHO portion of the market, as consumer inkjet printing continues to slump, so let’s assume Funai will do the same.

Funai does have newer, better inkjet technology at its disposal than those infamous Lexmark inkjets from back in the day that used a single tricolor cartridge to print in composite black. Shortly before it pulled the plug on its inkjet business, Lexmark launched the OfficeEdge series of inkjets based on its Vizix Pro platform (see “Lexmark Gets Serious about Business Inkjets with New OfficeEdge Series”). 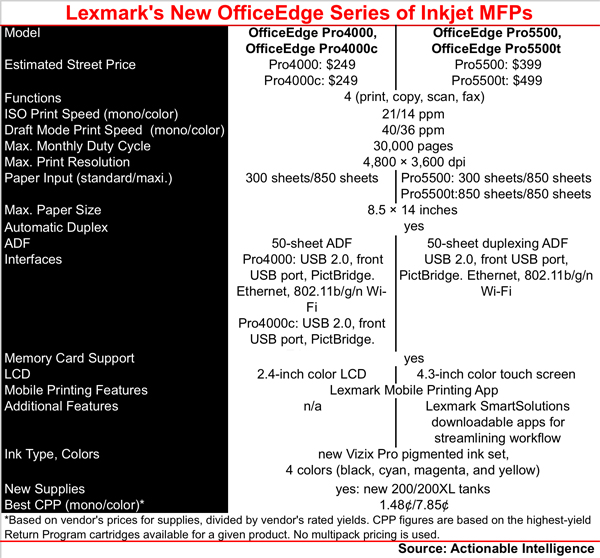 Might Funai bring to market devices similar to these Lexmark OfficeEdge devices?

The OfficeEdge devices used an off-axis design featuring large, high-capacity stationary ink tanks (with yields of 2,500 pages in black and 1,600 per color on the high-yield SKUs) that piped ink to a permanent thermal print head with 8,192 nozzles. The higher nozzle count allowed the units to print faster than previous Lexmark inkjets. ISO print speeds were 21 ppm in black and 14 ppm in color. The ink itself was fully pigmented for all four colors. The series featured automatic duplexing, Ethernet and wireless connectivity, and ADFs. Moreover, the higher-end devices came with a 4.3-inch color touch screen and duplexing ADFs. Cost per page (CPP) was as low as 1.48 cents in black and 7.85 cents in color. In short, at first glance, these would appear to be some competitive features for an inkjet all-in-one today.

Thus, I suspect that although Funai may make improvements to various feature sets, the Vizix pro platform, or a successor platform using similar technology, will probably be the basis for whatever Funai ultimately develops and launches.

What Pricing Band Will Funai Target?

The original Lexmark OfficeEdge models were priced from $249 to $499. But can a similarly featured device support such price points today? The short answer is no.

Data from our upcoming U.S. inkjet report shows that if Funai were to create a unit with the same feature set as the $499 OfficeEdge Pro5500t, for example, and price the hardware and supplies identically to Lexmark and thus compete in the $400+ inkjet all-in-one category, the firm has no chance of success. Today, this segment of the market includes HP’s Officejet Pro X and Officejet Enterprise X series machines. The OfficeEdge series’ ISO print speeds of 21 ppm in black and 14 ppm in color are not competitive against devices that can print at 36 ppm to 44 ppm in both black and color. Moreover, $400+ inkjet all-in-ones use cartridges that yield many thousands of pages (9,200 pages in black and 6,600 pages in color for those models closer to the $400 price point). Inkjet all-in-ones in this price band also have CPP figures that are much lower than the OfficeEdge devices.

A device such as the OfficeEdge Pro5500, which was priced at $399, holds up better in the $300 to $399 inkjet all-in-one category. Still, the 14 ppm color print speed of the OfficeEdge Pro5500 is on the slow slide for this category. The Lexmark unit’s cartridge yields aren’t best in class at this price point, but they aren’t ridiculously low either. A CPP of 1.48 cents in black and 7.85 cents in color, similarly, isn’t the worst in this class, but it is a bit worse than average. So, it would seem that unless Funai comes out with some big improvements to the most recent SOHO inkjet platform it created for Lexmark so as to stand out from the crowd, it cannot justify a price point of $300 to $399.

If we look at how devices such as the Lexmark OfficeEdge Pro 4000/4000c, which were originally priced at $249, hold up against today’s $200 to $299 inkjet all-in-one category, the answer is better, but not overwhelmingly so. The Lexmark units again have slower than average color print speeds, but a black print speed that is better than average. There are models in the $200 to $299 price tier that offer lower CPP figures than those offered by the OfficeEdge devices, but in general the OfficeEdge devices have pretty good—indeed, better than average—CPP for this market segment.

The question is whether Funai can price whatever inkjets it develops this low and make a profit. The economics of this may simply not be possible. But, as the saying goes, Funai is going to have to go big or go home. And unless the firm has a revolutionary new inkjet platform at its disposal, such as a page-wide device, it would appear that sticking under the $200 mark might be its best and indeed only bet. Funai has a good relationship with Walmart and that retailer’s Sam’s Club warehouse chain. If, indeed Funai is looking to make Walmart and Sam’s Club a central part of its inkjet distribution strategy in the United States, offering lower price points would seem to be prudent.

However, even if Funai were to offer an OfficeEdge-like device at, say, $99, and completely blow away the competition in terms of product specifications, that will not guarantee the firm a home run. Consumers seldom base their purchasing decisions entirely on a strict spec-by-spec comparison between different models at similar price points or even on some special competitive advantage. If they did, there would be no such thing as an entry-level color laser printer or MFP as business inkjet devices would have entirely replaced this category, and Kodak would have made more headway in taking away share from other inkjet OEMs with its message about low-cost ink.

Brand and the perceived reliability of that brand play a key role in buyers’ purchase decisions. And how will consumers/SOHO users feel about a Funai-manufactured, Kodak-branded inkjet in relation to products from firms such as HP, Canon, and Epson? I suspect Funai has its work cut out for it in this regard.

Moreover, if Funai’s Kodak branded printers are launched, will consumers and SOHO users even be able to find them? Securing adequate distribution has proven a stumbling block for previous firms looking to disrupt the printer market like Pantum with its low-cost laser products or Memjet with its office color inkjets. I presume that Funai could get shelf space for its Kodak-branded printers at Walmart and Sam’s Club, but the amount of shelf space devoted to printing products at such stores is growing ever more limited, so that may not be a safe assumption. Moreover, to truly penetrate the consumer/SOHO market, Funai would need to secure distribution at other retailers and various online resellers as well. That will not be easy.

Solution Looking for a Problem?

The biggest question I have about Funai’s proposed entry into the consumer/SOHO printer market is whether this market actually needs another player. I don’t think so—hence the title of this piece. Oftentimes businesses fail when they start with a solution and then desperately look for a problem to solve, rather than focusing on the problem first. I just don’t hear or see, or anticipate hearing or seeing, end users clamoring for an alternative to the Brother, Canon, Epson, and HP inkjets currently on the market.

But maybe Funai has identified key problems and pain points it can address with its printing products. One trend we explore in our upcoming inkjet report is how declining inkjet market segments, specifically the single-function segment, have become rife with niche products—specific products that fulfill the specific needs of a relatively small subset of customers. One possibility for Funai is to eschew the general crush in the consumer/SOHO inkjet all-in-one market and offer some interesting niche products. For example, I still think my idea for a web-enabled, kid-friendly, inkjet printer for printing coloring pages, crafts, and decorations has merit and is something not offered by current inkjet OEMs (see “A Totally Serious Proposal for Inkjet OEMs”). There may be some similar opportunities.

I will be eagerly watching to see what Funai’s Kodak printers looks like and how the firm seeks to differentiate itself in a crowded and mature market.