Recently, I was interviewed by the Wall Street Journal (WSJ) for an article about a phenomenon purportedly growing in offices across the land—smashing printers and copiers to smithereens. People may be printing less and fewer office imaging devices are being installed, but apparently these pesky machines that we follow so closely (and love so much) still evoke hate and discontent and end users revel in bashing them to bits.

On August 11, Bradley Olson, a reporter for the WSJ, called me and said he was writing a piece about office workers who gleefully perpetrate acts of violence on their printers and copiers. He asked me if I was familiar with the scene from the 1999 film Office Space, in which a group of disgruntled office workers gather in a field and ritualistically demolish a printer or MFP that has caused them untold amounts for grief. (And, yes, there is healthy debate online about exactly what model was used in the movie.) I told Mr. Olson that I knew the movie and the scene well, as do many in the digital imaging industry. I noted that I regularly hear the scene referred to—and sometimes actually see video of the scene—at talks given at industry events, especially by speakers who are involved in service and maintenance. 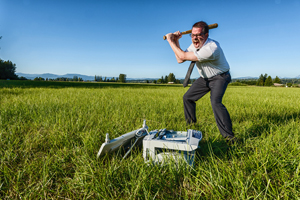 The classic printer-smashing scene from “Office Space” is popular enough to be emulated in the world of stock photos, such as this one.

Mr. Olson and I then discussed why, at this late date, printers and copiers continue to be maligned by so many office workers. Perhaps it’s because printing is the last step in what may have been a long and arduous struggle to produce a detailed report or presentation? After hours, weeks, or even months of pouring one’s blood, sweat, and tears into a document, sometimes the print job fails and thus completion of one’s task must be postponed while the machine is made operational. Worse still, printers have an annoying habit of following Murphy’s law and malfunctioning at exactly the wrong time. Consider the user who, rushing to an important meeting, detours to the printer to retrieve crucial handouts but instead finds the paper-jam light blinking. The victim can see past the errant printer into a meeting room full of fidgeting co-workers and clients. The machine won’t print, however, and just keeps jamming (and not the fun kind of jamming that Bob Marley used to sing about).

I Didn’t Say That!

I was thrilled when I received word that I had been quoted in what is undoubtedly one of the world’s most prestigious newspapers. The article, “Do You Really, Truly Hate Your Office Printer? There’s a Bat for That,” which was coauthored by Mr. Olson and Sara Randazzo, was published on August 24 and appeared on page one. As the title implies, the article explored the practice of office workers destroying machines

According to the article, various enterprises are currently making money by providing patrons with the opportunity to beat up on printers and copiers. The piece detailed how there are theaters that show the movie Office Space and, at the end of the film, offer members of the audience the opportunity to adjourn from the theater and reenact the scene outside. Mr. Olson also wrote that so-called “rage rooms” are “springing up all over the country for customers to vent their anger by smashing objects, including dishes and old furniture. Printers are often the most in-demand item.”

But there was one big problem with the article, from my perspective: Mr. Olson attributed a quote to me that I never said.

He misquoted me as indicating that the practice of smashing printers is now common at events within our industry. The original version of the article misquoted me as saying that “one-in-five” events feature what Mr. Olson termed “breaking stations” where folks queue and wait for the chance to beat up on a printer or copier. That is not what I said, and I remain unclear on how or why this quote was attributed to me. After Mr. Olson and I discussed the fact that I have never heard of his so-called breaking stations and that those in the industry don’t destroy the devices that represent their livelihood, the WSJ ran a correction. No harm, no foul.

If the rest of what Mr. Olson wrote is correct, the article indicates that twenty-first century office workers really dislike printers and copiers. I must admit, this was a bit of a revelation. Over the years as I have speculated about why people are printing less, the fact that end users actually hate the act of printing didn’t factor much into my analysis. Like so many others, I’ve attributed declining print volume to the growing number of smart devices and other electronic alternatives to hardcopy. And, of course, some folks print less to be more environmentally-friendly. But, if Mr. Olson’s implied thesis is correct, end users loath the act of printing so much that they jump at the chance to wreck a printer.

Those that manufacture and sell digital imaging equipment ought to keep Mr. Olson’s article in mind as they try to place more device and get office workers to print more pages. The sentiments demonstrated so memorably in Office Space were not left back in the 1990s. They are alive and well today.