On March 8 and 9, Canon U.S.A., Inc. hosted its 2017 One Canon Event at the Boca Raton Resort and Club in Boca Raton, FL. The event allowed industry analysts to learn from the firm’s management team how various businesses within Canon U.S.A. are performing and gain insights into where the company is looking to grow. In addition, attendees had an opportunity to learn about Canon’s latest products, including several new offerings that were unveiled during the event.

The 2017 One Canon Event opened with a morning of presentations made by various senior managers at Canon U.S.A. After the presentations, the assembled analysts toured an exhibition space that featured Canon’s new Océ Colorado 1640, which features a unique UV-curable ink set, and the varioPRINT 140 series of monochrome production presses. We also had a chance to look at some new imageRUNNER and imageCLASS products launched at the event and discuss how the go-to-market strategy for these machines is evolving.

Francis McMahon, vice president of the Canon Business Imaging Solutions Group’s (BISG) Production Print Solution team, kicked things off and acted as master of ceremonies for the 2017 One Canon Event. He then introduced Canon U.S.A. Chairman CEO Yoroku Adachi, who shared data related to the firm’s overall performance last year. With total revenue of approximately $31.3 billion during the last full fiscal year, Canon Inc. is among the world’s largest firms marketing document imaging equipment. According to Mr. Adachi’s data, last year the Americas generated 28 percent of the Canon’s total revenue, followed closely by Europe, which accounted for 27 percent of the firm’s sales. With 24 percent of sales, the Asia and Oceania region was the firm’s third-largest revenue generator in 2016, and Japan was fourth at 21 percent.

While the focus of Actionable Intelligence is on A3 and A4 devices for the SOHO, SMB, and enterprise markets, along with supplies for these devices, we welcomed the opportunity to learn about Canon’s activities in other market segments. Mal Baboyian, senior vice president of BSIG Océ Marketing and Support, drilled into the big iron numbers for the Americas. He indicated that 2016 was a record year for Canon Solutions America in terms of sales and service with revenue up 4 percent from 2015 and profits up 17 percent. Mr. Baboyian credited the popularity of the sheet-fed VarioPrint i300 inkjet digital press and ColorStream inkjet presses for some of last year’s success and presented data that showed Canon was the number-one firm in the U.S. volume inkjet market with a 38 percent market share.

According to Mr. Baboyian, BSIG’s large-format printer revenue in North America saw a “slight decline” last year, but profits exceed the firm’s targets. Overall, he was upbeat about the business and said the firm maintained its number-one position in terms of market share and sales of technical document machines despite HP’s entrance into the space with its high-speed PageWide device. Mr. Baboyian said the firm was also number one in the North American flat-bed large-format printer market last year and is taking steps in 2017 to strengthen its position. Canon is currently “repositioning” pricing within its Arizona wide-format line to grab more market share and rapidly grow its graphics business. According to Mr. Baboyian, Canon aims to grow its Arizona flatbed sales by 50 percent this year, while mounting a strong defense of its technical document/CAD business. To bolster its position in the market, the company launched the new Océ Colorado 1640 in Boca Raton. Mr. Baboyian called the launch most important product introduction in the large-format market in 25 years.

Hiroyuki Imamura, Canon U.S.A. BISG senior vice president and general manager of marketing, offered the assembled analysts some data regarding the recent performance of the firm’s electrophotographic machines. He presented data from InfoTrends Quarterly Tracker indicating that Canon held the number-one market-share slot in the mid-production color market due to strong sales of machines like those in Canon’s imagePRESS C850 and C10000VP line. Citing the same source, he said that Canon was the market-share leader last year in the category made up of devices that print in excess of 200 ppm, thanks in part to sales of Océ VarioPrint 6000+ units. According to Mr. Imamura, revenue from sales of mid-production units soared 72 percent, while sales of 200-ppm plus device grew a healthy 17 percent. He added that revenue from PRISMAdirect orders and workflow-management software sales skyrocketed 100 percent last year.

During his talk, Mr. Imamura pointed out that Canon is now marketing a wide range of A4 and A3 laser machines, which has helped to fuel overall sales of office devices. These comments square with our observations over the past couple of years. In addition to releasing a growing number of third-generation imageRUNNER units, Canon has been filling out its imageCLASS line, which is made up of A4 devices that have historically sold through retail channels. In 2015 and 2016, Canon refreshed and expanded its Color imageCLASS offerings (see “Canon Launches Four New Color ImageCLASS MFP Devices, Plus One New Mono MFP” and “Canon Updates imageCLASS Line with Two New Color MFPs”), and last year the company updated and broadened the range of monochrome units with the addition of 16 new A4 black-and-white printers, MFPs, and copiers (see “Canon Refreshes Monochrome imageCLASS Lineup with 11 New Models” and “Canon Upgrades imageCLASS MF200 Series with Mobile Enhancements”).

In addition to saying that Canon now has the right mix of A3 and A4 machines to meet the needs of diverse businesses, Mr. Imamura stressed that Canon offers “dependability through the lineup.” He shared a video called “Printers in Concert” (see below), which features an orchestra using imageCLASS devices acting as music stands and printing the 70 pages of Beethoven’s 7th Symphony score for musicians who had not seen the sheet music in advance. The flawless delivery of the score allowed the piece to be performed without interruption.

One part of the dependability message is Canon’s ability to deliver a consistent end-user experience via the integration of Canon’s uniFLOW output-management platform across its office portfolio. The technology can manage all print, scan, and device-management processes for Canon devices within an organization. In addition to supporting secure printing and secure mobile printing, uniFLOW provides accounting and reporting features along with job-routing and print room management tools. The technology has been available across many of the machines in Canon’s imageRUNNER ADVANCE line and more recently a growing number of imageCLASS units have hit the market with optional uniFLOW support. 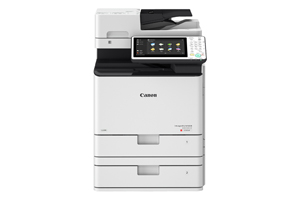 Canon updated its A4 imageRUNNER ADVANCE line with the release of the C255iF and C355iF.

The firm also added A4 machines to the line. The new imageRUNNER ADVANCE C255iF and C355iF, which print black-and-white and color jobs at 26 and 36 ppm, respectively, are both print/copy/scan/fax MFPs. With many of the features found on their A3 siblings such as tablet-based front-panel controls and optional uniFLOW functionality, the A4 imageRUNNER ADVANCE MFPs also feature V2 Color imaging technology.

Canon also added new A4 printers to its imageCLASS line. The imageCLASS LBP312dn is 45 ppm monochrome printer while four-function Color imageCLASS MF735Cdw MFP and single-function LBP654Cdw print monochrome and color pages at up to 28 ppm. The new Color imageCLASS MF735Cdw featured a new 5-inch color touch screen along with the Application Library platform, which allows users to create and manage customized workflows via a remote interface. The machines also support many of the tools found on imageRUNNER ADVANCE units including uniFLOW.

We found Canon’s focus on the A4 piece of its imageRUNNER line interesting. Historically, this line was marketed exclusively by Canon’s office dealer channel as well as its direct sales organization. In the past, the imageCLASS line made up most of Canon’s A4 laser portfolio and it was marketed primarily by retailers and Canon resellers. Now, it appears that the clear-cut channel differentiators observed in past the are blurring. Mr. Imamura confirmed for us that going forward the imageCLASS line will be more “dealer centric.”

While office machines grabbed our attention, Canon also released some higher-end units at the event. After pre-announcing the machine last year, the firm formally introduced the Océ Colorado 1640, a 64-inch roll-to-roll wide-format printer based on a new UV-curable ink set that Canon claims will transform the sign and display printing markets. The inks instantly gel when they hit the media and cure at a low temperature to eliminate any heat damage to the output. The device features what Canon touts as an advanced “self-aware” piezoelectric print head capable of performing nozzle monitoring and making adjustments on-the-fly.  Canon also released the third generation of the varioPRINT DP product line with the release of the varioPRINT 140 series. Targeting small to mid-sized commercial printers and in-plant applications, the 140 series is designed for environments with average monthly print volumes of up to 800,000 letter-size images and can accommodate up to 2.2 million monthly impressions. According to Canon, the varioPRINT 140 series produces no ozone emissions with virtually no toner waste.

Although the overall focus in Florida was on higher-end production and wide-format devices, we found the One Canon event to be worthwhile and informative. At the corporate level, Canon Inc. has faced significant challenges in various parts of its business. The firm’s camera and SOHO inkjet businesses have been under relentless pressure for many years. The company has also suffered as its key printer partner, HP, struggles with an ongoing slump in its LaserJet business along with declines in sales of supplies for these machines. It was clear from the One Canon event, however, that the Canon U.S.A. subsidiary has done better than its parent and it is taking steps to improve its performance even further.

We found the broadening intersections between the imageCLASS and imageRUNNER ADVANCE lines to be the most interesting news at the conference. With printer unit shipments and revenue dropping significantly—sometimes falling by double digits—it has been clear for some time that Canon’s A4 business was in decline. Allowing more of these machines to move through the office-equipment dealer channel regardless of brand should slow declines. Over the past 10 years, competitive dealers such as those that carry the Konica Minolta and Ricoh lines have increased their market share in the A4 space, which has had an adverse impact on Canon’s and HP’s printer businesses.

Canon U.S.A does face some serious challenges, however. During his overview, Mr. Adachi acknowledged that HP’s LaserJet business represents about 25 percent of Canon U.S.A.’s total revenue. With the pending acquisition of Samsung’s printer business by HP (see “HP Makes Big Play for Copier Market with Purchase of Samsung’s Printer Business”), what will become of all that LaserJet revenue is anything but certain. We think that ongoing declines in LaserJet sales and the merger are behind Canon’s move to broaden its selection of A4 devices along with the channels that can move these Canon devices. Mr. Adachi remarks regarding declines of revenue from Canon’s Office group as unit shipments grow also raised red flags for us. If revenue is dropping while shipments increase, then margins are eroding and we suspect much of this erosion is happening with the imageRUNNER ADVANCE and imageCLASS product lines.

It is clear that the strong performance for Canon’s products for commercial applications including high-end wide format printers and digital presses are stabilizing Canon U.S.A.’s overall business. It will be interesting to see if the firm can continue to grow these businesses along with the profits they generate as Canon U.S.A. looks to improve the performance of its more traditional office products.