You are at:Home»Industry Insights»OK, We’re Obsessed with OK Go’s Obsession 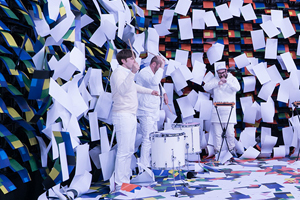 OK Go’s latest music video, “Obsession,” is aptly named. The Actionable Intelligence staff is obsessed with this audiovisual treat featuring a wall of laser printers that create an eye-catching, ever-changing, colorful background for the American rock band, their music, and their aerial antics.

OK Go has become known for creative music videos. For example, some will recall their choreography on treadmills for “Here It Goes Again,” which went viral about 10 years ago. At Actionable Intelligence, we don’t normally post or write about music videos, but this time we couldn’t help ourselves given that the technology behind the video—printers and hardcopy—is our area of focus.

OK Go’s latest video, “Obsession,” was released on November 23 (the Thanksgiving holiday in the U.S.). Rolling Stone says the video, which was filmed over five days in Japan, uses “stop-motion imagery, precise choreography, and 567 printers to create the ‘world’s first paper mapping’ project.” While a huge amount of paper was consumed to make the video, all the paper used in the project was recycled and the proceeds gained from the recycling were donated to Greenpeace.

According to a behind-the-scenes video, the group was inspired to make the video by papermaker Double A offering them as much smooth paper as they wanted to make an art project. This became the “sandbox” for the band to play in and develop the concept for the video. The concept they came up with is printers producing output that looks like a moving video.

OK Go’s lead singer Damian Kulash said in the behind-the-scenes video, “I wasn’t sure it was possible to get tens of thousands of prints through the printers with no error.” The smoothness of the Double A paper was key. The group said they experienced no printer jams during the filming of the video. OK Go also found that Double A’s motto—“Work Smart, Play Hard”—resonated with the band. Double A has a website about the music video and its partnership with OK Go on the project.

Unfortunately, while we have seen a lot about the paper employed in the video, we have yet to see anything about the printing technology that is employed. Whose printers are these? We’d love to know more! Have a hunch or know more about the printers? Comment below or email us at editor@action-intell.com.

You can enjoy OK Go’s “Obsession” below. People who are susceptible to seizures may not want to view the video due to the flashing colors.