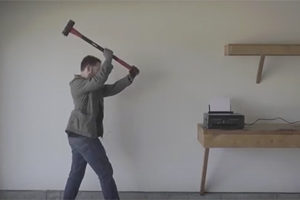 Another guy smashing another printer.

You may have seen Mashable’s headline about a “massively viral” video claiming ink cartridges are a scam or maybe you follow Gregory Austin McConnell on YouTube. But for those of you who have not seen it yet, well-known YouTuber Mr. McConnell posted a new video on March 15 in which he tackles a topic familiar to us printer and supplies folks: the high cost of ink cartridges. You can check it out below.

We have watched the video a couple of times now, and, forgive us for yawning, but we have got to say there’s not a lot that is new here. Every now and then for at least a couple of decades now, someone will make a lot of noise about how the ink employed in your typical inkjet cartridge is some of the most expensive liquid on the planet—more expensive than Chanel No. 5, oil, blood, pinkeye medication, or what have you.

And, of course, the biggest running trope used to express outrage with printers has remained the same for nearly two decades. Ever since the 1999 film Office Space, those frustrated with their office printers and MFPs have occasionally expressed that sentiment by whacking away at the device with a sledgehammer or baseball bat.

You get to see both in Mr. McConnell’s video.

Is Mr. McConnell’s point that while working in technical support for a major computer provider that company sold multipacks ink cartridges for $59.95 that had a cost of manufacturing of 23 cents interesting? Yes. Is it all that surprising? Not really.

Mr. McConnell notes that printer OEMs claim ink is expensive because ink technology is expensive, but he says not much changes in ink cartridges from one generation to the next and that all the technology is housed in the printer. This, to us, seems to be incorrect. There is indeed a lot of technology in inkjet cartridges. In the case of integrated print-head inkjet cartridges, almost all the important printing technology is in the cartridge itself. OEMs are continually improving ink formulations, introducing new print heads, redesigning chips, and introducing new cartridge features designed to improve the end-user experience. All that costs money. A multibillion-dollar industry—the aftermarket supplies industry—has arisen that spends millions in R&D just to understand what OEM cartridges do and then try to design non-OEM parts to perform just as well without infringing.

The bottom line is that some folks like Mr. McConnell object to the razor-and-blades business model. They feel it is a “scam.” We understand that it is annoying, perhaps initially even shocking, to learn you are paying a huge markup on consumables, but that is why OEMs are willing to sell the initial hardware at a loss. They can only make inkjet printers as affordable as they are because they expect to recoup the money they lost on the sale of highly profitable ink cartridges. If printer makers were to sell both printers and consumables at a loss, pretty soon there would be no printer makers.

We think Mr. McConnell does raise some valid points about consumer frustrations with inkjet printers and some commonly encountered problems with these devices.

Still, we found the end of Mr. McConnell’s video annoying—and not just because of the whole smashing-the-printer-to-bits cliché.

When you point out a problem, you should also try to see if you can find a solution. Mr. McConnell’s solution is to get people to share his video to “tell these companies enough is enough.”

But Mr. McConnell is ignoring the fact that he is far from the first guy to complain about consumer ink jet printers and their ink costs. And because objections to the high cost of ink are so widespread, there are already solutions out there today.

If you are truly irritated about the cost of ink, you have options. You can buy a third-party inkjet cartridge. These sell for a small fraction of the cost of the price of OEM ink cartridges. If you are an HP printer owner, you can sign up for Instant Ink and subscribe to a monthly ink-subscription plan—this can bring your ink cost on a per-page basis down as low as 3.33 cents or even down to zero if your monthly page volumes are low enough with HP’s new Free Printing Plan (see “HP Adds New Free Printing Plan to Instant Ink Subscriptions”). You can buy one of Epson’s EcoTank devices or Canon’s PIXMA G-series inkjets (see “A Look at Epson’s New EcoTank Lineup” and “Canon Dives into CISS Inkjet Market in the U.S. with PIXMA G-Series MegaTank Line”). These machines use refillable ink tanks and ship with a couple of years of ink right in the box. And after that the cost of replacement ink is low—well under a penny a page for color and about a third of a cent for black.

In other words, if the high cost of ink really gets your goat, solutions already exist other than taking a sledgehammer to your printer or sharing YouTube videos.

(Visited 496 times, 1 visits today)
consumer inkjet
Previous ArticleKatun Announces It Is Not on the List of Firms Sued by Canon
Next Article Xerox and Fujifilm Move to Dismiss Deason’s and Shareholders’ Lawsuits