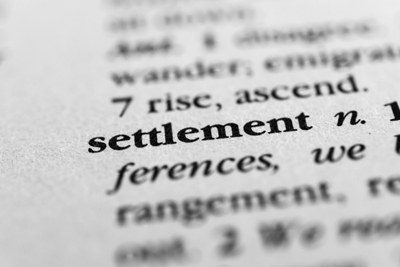 Actionable Intelligence has been covering the twists and turns in a consolidated class action filed against HP over a firmware update that locked out aftermarket ink cartridges since 2016. Shortly before 2018 came to an end, we reported that the U.S. District Court for the Northern District of California had granted preliminary approval to a settlement that will end the case (see “Court Grants Preliminary Approval to Settlement in HP Printer Firmware Update Litigation”). Part of what was approved was the plan for providing notice to the settlement class. Now, potential members of the settlement class are being notified about their options.

In early 2016, HP pushed out a firmware update to OfficeJet and OfficeJet Pro inkjet printers and all-in-ones using the HP 934/935, HP 950/951, and HP 970/971 inkjet cartridges. The firmware update had a dynamic security feature timed to go off and disable third-party cartridges starting on September 13, 2016 (see “HP Inkjet Printer Firmware Update Disables Some Third-Party Inkjet Cartridges”). As revealed in the litigation, HP installed dynamic security in about 3.5 million printers.

After an outcry among customers and lots of negative publicity, HP eventually apologized and offered a firmware fix, although the OEM indicated that it would continue to use similar authentication technology to protect its intellectual property (see “HP Apologizes over Aftermarket-Cartridge-Killing Firmware Update, Will Offer Fix for Affected Customers”).

Five class actions were filed against HP over the firmware update in U.S. district courts. In the order that they were filed, the list of lawsuits includes:

HP filed a motion to dismiss the consolidated complaint in April 2017 (see “HP Asks Court to Dismiss Consolidated Printer Firmware Class Action”). In March 2018, Judge Edward J. Davila for the U.S. District Court for the Northern District of California issued a mixed decision on HP’s motion to dismiss (see “HP Gets Claims in Firmware Class Action Dismissed but Judge Allows Plaintiffs to Amend”). The judge dismissed some of the plaintiffs’ claims but saidhe would allow plaintiffs to amend their complaint.

In May 2018, the plaintiffs and HP jointly asked the court to extend the deadline for the plaintiffs to file their consolidated second amended complaint, explaining they were exploring a resolution of this matter (see “Will HP Settle Inkjet Firmware Class Action?”). In July 2018, the parties notified the court that they had “reached a settlement in principle to fully and finally resolve the litigation” (see “HP Settles with Plaintiffs in Inkjet Printer Firmware Class Action”).

In September 2018, the parties asked the court to grant preliminary approval of a class action settlement (see “Settling Firmware Class Action Will Cost HP”). HP agreed to pay class member $1.5 million. HP was also on the hook to pay 5,000 apiece to each of the individual class representatives. A separate issue to be decided is what HP will pay class counsel for representing the plaintiffs in this matter. The class counsel said they would seek an award not to exceed $2.75 million, as well reimbursement of litigation expenses of no more than $150,000.

As noted above,on November 19,2018, U.S. District Judge Edward J. Davila issued an order granting preliminary approval to the class-action settlement and the plan for providing notice to the class (see “HP Inkjet Printer Firmware Update Disables Some Third-Party Inkjet Cartridges”).The class consists of all persons who own or owned one or more of the following printers:  HP OfficeJet 6812, 6815, and 6820; the OfficeJet Pro 6230, 6830, 6835, 8610, 8615, 8616, 8620, 8625, and 8630; and the OfficeJet Pro X451dn/dw, X476dn/dw, X551dw, and X576dw. The judge said the settlement amount—$1.5 million—was to be placed in an escrow account and managed by an escrow agent. Epiq Class Action & Claims Solutions, Inc. was appointed as claims administrator to supervise the process, including setting up a settlement website and a toll-free number, determining which claims are eligible, and allocating cash payments from the settlement funds.

The notice plan called for Epiq to provide direct notice to class members by email or first-class mail. In addition, on January 7, 2019, the U.S. District Court for the Northern District of California issued a press release about the settlement, titled “Owners of HP Printers that Stopped Working with Non-HP Replacement Cartridges Could Be Eligible for a Payment from a Class Action Settlement.”

The press release briefly summarizes that a settlement has been reached in this class action and notes, “HP agrees under the settlement not to reactivate Dynamic Security in the Class Printers and to pay $1.5 million. HP denies that it did anything wrong.”

Class Members can get reimbursed for out-of-pocket expenses like the cost of replacement cartridges, a replacement printer, or printing or printer repair services. Class Members can make a claim and attach receipts or other documentation of their losses. Or, Class Members can make a claim for lost money or time without attaching documentation by providing the information requested on the Claim Form about their print interruption. The settlement money will be used to pay all documented claims first, with any remaining money divided equally among all class members. The amount of money claimants will get will depend on the number and type of claims submitted.

To get part of the settlement fund, eligible class members have to submit a claim form and postmark it by March 8, 2019. Class Members can make a claim online at www.HPPrinterFirmwareLawsuit.com. They can also contact the claims administrator to request a paper claim Form by telephone at 1-877-861-1101 or by U.S. mail at HP Printer Firmware Claims Administrator, PO Box 4079, Portland, OR 97208-4079. The completed claim form can then be sent back to the same U.S. mail address or faxed to 1-866-741-1848.

While the monetary relief offered to members of the settlement class is significant, perhaps more significant for the industry is that HP has agreed as part of the settlement not to use dynamic security on the affected printer models. That is good news not only for customers who choose aftermarket cartridges but for the companies that manufacture and sell these products.