You are at:Home»Uncategorized»Chipjet Releases Replacement Chips for HP 106A/118A Series

On November 19, Chinese aftermarket cartridge chip manufacturer Hangzhou Chipjet Technology Co. (Chipjet), which is owned by Hubei Dinglong, rolled out replacement chips for cartridges used in a wide range of low-cost monochrome and color laser devices that HP launched in 2019 based on HP/Samsung engines.

HP acquired Samsung’s printer business in 2017 (see “HP Completes Acquisition of Samsung’s Printer Business”). Prior to that, HP had solely used Canon engines in A4 LaserJet laser printers and MFPs and mainly used Canon engines in its A3 devices as well. Although shortly after the acquisition, HP rolled out a line of A3 MFPs based on Samsung engines, the Canon/HP partnerships continues for A4 and some A3 products. Just this month, HP announced the first HP+ devices in the LaserJet M200 series using a Canon engine design (see “HP Launches First HP+ Printers That Require HP Ink and Toner”). However, HP has also been launching its own “HP Laser” and “Color Laser” A4 devices using the laser technology that it acquired from Samsung. HP introduced a slew of these devices in May 2019 including the monochrome HP Laser 107/108 series and HP Laser MFP 135/136/137 series as well as the color  HP Color Laser 150 series and HP Color Laser MFP M178/179 series.

Now, Chipjet has replacement chipsets for the cartridges employed in these devices. Chipjet says its chips were developed in-house and deliver stable, safe performance. The firm also says it offers “professional and prompt service.” 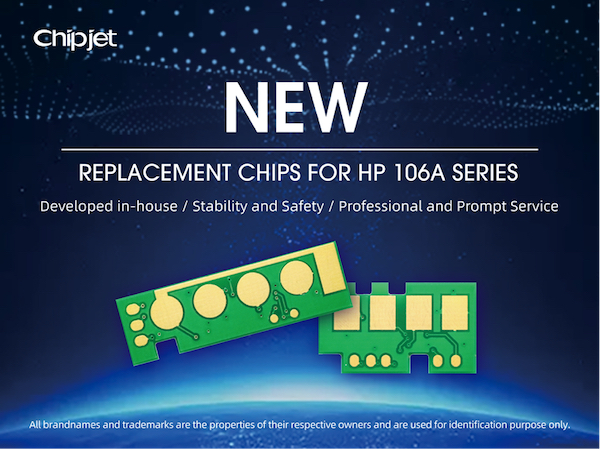