In late October and throughout the month of November, printer OEMs announced financial results for the three-month period ended September 30, 2020. The quarter was the third in which printer and MFP makers reported a strong negative impact from the coronavirus (COVID-19) pandemic. The quarter ended in September was not a good one for the industry, to be sure. However, it followed a quarter that many deemed to be the worst in the industry’s history (see “The Big Picture: OEM Financials for the Quarter Ended in June 2020”). In general, most OEMs posted sequential improvements for the quarter ended in September, although results were still down sharply year-over-year. 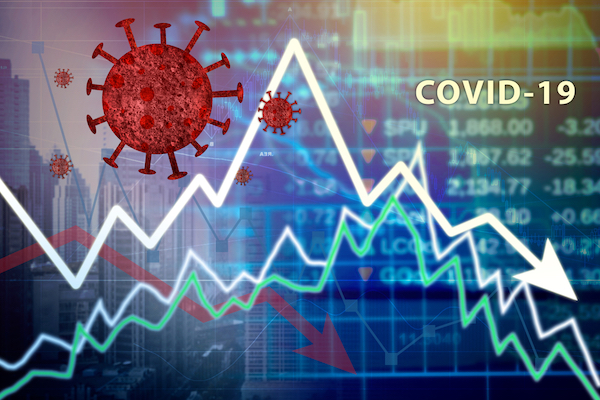 With just two exceptions (Sharp, which combines its printing segment with other business such as TVs, and Brother, whose printing business reported flat revenue), OEMs reported revenue declines in their printing businesses of anywhere from 2.0 percent to 22.1 percent. Those year-over-year declines aren’t great but are better than the revenue declines of 15.4 percent to 39.1 percent reported by OEMs in the previous quarter.

Things were better this quarter compared with the last in terms of printing segment profits as well. Last quarter, just one firm (Epson) reported profit growth in their printing business. This quarter, three firms did. Canon’s Imaging System segment reported a huge uptick in profits, and profits grew for Brother’s and Epson’s printing segments as well. For the quarter ended September 30, 10 segments reported year-over-year declines in profits, but just three segments reported operating losses. That compares with the seven segments that reported operating losses in the quarter ended June 30.

For all the Japanese OEMs, except Canon, the period from July 1 through September 30 was the second quarter of the fiscal year ending March 31, 2021. For Canon, U.S.-based Xerox, and China-based Ninestar, this period was the third quarter of fiscal 2020. HP is on a different financial calendar than all the other OEMs. Its fourth quarter of fiscal 2020 ran from August 1 through October 31, 2020.

In the quarter ended September 30, those OEMs that offer small-office/home-office (SOHO) printers and MFPs continued to experience upticks in demand for those products due to pandemic-wrought work/study-from-home trends. This mostly meant increased demand for inkjet printers and their consumables. In the previous quarter, most inkjet makers experienced product shortages that limited growth. While shortages remain for some products, the big three inkjet OEMs—HP, Canon, and Epson—all benefited from strong inkjet demand in the quarter. Compared to its rivals, Brother experienced more severe inkjet shortages that left it unable to fulfill demand, so its inkjet sales were down year-over-year. Instead, Brother pushed its lower-priced laser devices as SOHO solutions and experienced some growth in this area of its business.

As was true last quarter, those OEMs focusing mainly on A3 MFPs and production printers and their supplies experienced a stronger negative impact from the pandemic than did firms with robust SOHO printer portfolios. As a result, many traditional copier OEMs rushed to offer dealers and customers work-from-home bundles that include A4 printers/MFPs, but—at least so far—such bundles do not seem to have done much to offset steep declines seen in other areas of their business.

When we look at the performance of OEMs’ printing businesses, there are a few helpful things to keep in mind. We classify all of Ninestar and Xerox as printing businesses. Sharp’s 8K Ecosystem business includes various products in addition to MFPs, including Sharp’s TV business, so the segment’s results don’t necessarily say much about the MFP and supplies business. Similarly, OKI’s new Components and Platforms Business includes its former Printers business, Mechatronics Systems business, and EMS business and thus does not necessarily reveal much about printers and supplies specifically. Canon’s Imaging Systems segment includes its shrinking camera business in addition to its now-booming inkjet business. In other news, Konica Minolta renamed its Office Business unit the Digital Workplace Business. It still includes office and IT service products, only now Konica Minolta is also breaking out its Workplace Hub sales.

As was the case for the quarter ended in June, not a single OEM reported both revenue and profit growth in their printing businesses in the quarter ended in September. Brother Printing and Solutions reported flat revenue and operating profit growth. Two other printing businesses—Canon Imaging Systems and Epson Printing Solutions—reported revenue declines and profit growth. Sharp’s 8K Ecosystem segment also had mixed results in the form of revenue growth but a profit decline. All other printing segments saw revenue and profits shrink, but the year-over-year declines were mostly smaller than in the previous quarter. Also, only three printing businesses (Konica Minolta Professional Print, OKI Components and Platforms, and Toshiba Tec Printing Solutions) had operating losses for the quarter. While that’s not great, seven printing segments reported operating losses in the quarter ended June 30. 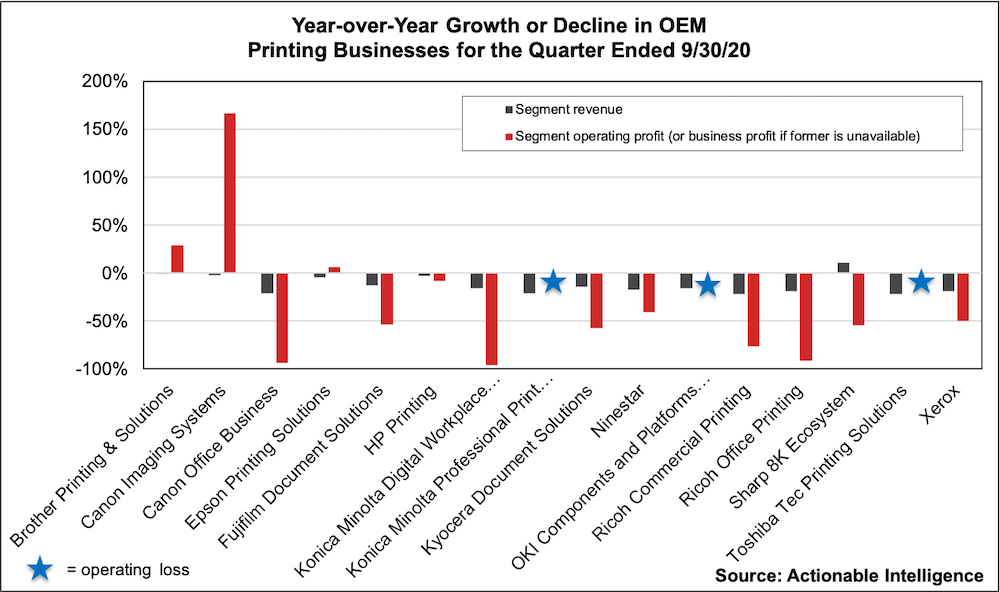 Last quarter, most OEMs finally issued forecasts for FY 2020 after delaying them earlier in the year due to uncertainties surrounding COVID-19. This quarter, Konica Minolta at long last issued its forecast for FY 2020. Xerox continued to decline to provide guidance.

Certain OEMs seem to have felt their results hit a bottom in the quarter ended in June and were encouraged enough by improvements in the quarter ended in September to raise their guidance for the year. Firms lifting their revenue and profit forecasts for FY 2020 included Brother, Canon, Epson, and Fujifilm. Ricoh revised its outlook for revenue and profits downward, and Toshiba Tec cut its revenue forecast.

While some OEMs lifted their forecasts, almost nobody is projecting growth for FY 2020. The only upbeat forecast comes from Sharp, which derives most of its revenue and profits from product categories other than printer equipment and supplies. All other OEMs are projecting steep revenue and profit declines (although Epson expects modest net profit growth).

Want more financial comparisons? We’ve got them! Check out our subscriber-only Actionable Briefing on OEMs’ financial performance this quarter (see “A Battered Print Industry Begins to Show Some Signs of Life”). For information on subscribing to Actionable Intelligence, see our Membership Options page. 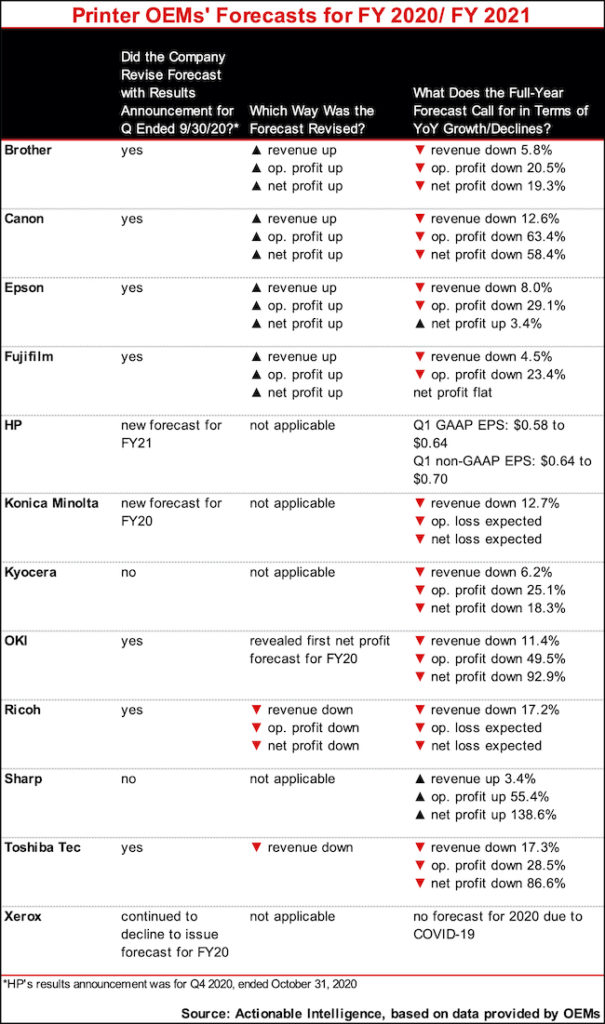