In late January and throughout the month of February, printer OEMs announced financial results for the three-month period ended December 31, 2020. The quarter was the fourth in which most printer and MFP makers reported a strong negative impact from the coronavirus (COVID-19) pandemic. However, in this most recent quarter, not everybody saw declines. 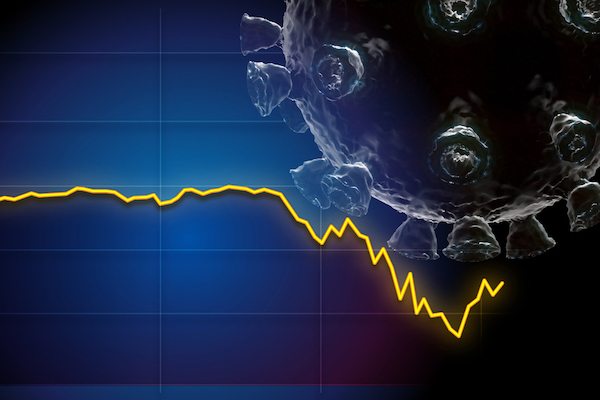 Company financials are beginning to bounce back from the steep COVID-19-related declines seen several months ago.

Although OEMs are recovering, the recovery was uneven. Market conditions and the shift to work-from-home favored OEMs with robust small-office/home-office (SOHO) A4 portfolios. These include inkjet devices but also some lower-priced lasers for the desktop. Three OEMs with strong SOHO hardware portfolios—HP, Brother, and Epson—actually reported revenue growth in their printing businesses. Canon’s Imaging Solutions segment, which markets inkjets, saw the smallest revenue decline, as shrinking demand for cameras offset some of its inkjet business’s growth.

The big increase in demand for SOHO printers and MFPs over the last several months initially caught vendors by surprise. Moreover, COVID-19 impacted their production. As a result, many vendors including Brother, Canon, Epson, and HP have experiences shortages of SOHO printers and their consumables. While the situation has eased over the last couple of quarters, problems remain.

Times are tougher for OEMs that are more focused on office equipment such as A3 MFPs or production printers. These OEMs reported year-over-year revenue declines in their printing businesses ranging from 1.9 percent to 22.6 percent. Still, things are gradually normalizing. In comparison, in the disastrous quarter ended in June, all OEMs saw revenue declines ranging from 15.4 percent to 39.1 percent.

Actionable Intelligence currently covers financial results for the following printer OEMs: Brother, Canon, Epson, Fujifilm, HP, Konica Minolta, Kyocera, Ninestar, OKI, Ricoh, Sharp, Toshiba Tec, and Xerox. However, Sharp is not announcing results until later this month due to accounting issues. We decided not to wait for Sharp to announce to write this post; Sharp’s financial reports say little about its MFP business anyway. We are also not including results for Ninestar this quarter. Ninestar does not report results for the fourth quarter, ended December 31, until April.

For all the Japanese OEMs, except Canon, the period from October 1 through December 31, 2020, was the third quarter of the fiscal year ending March 31, 2021. For Canon and U.S.-based Xerox, this period was the fourth quarter of fiscal 2020. HP is on a different financial calendar than all the other OEMs. Its first quarter of fiscal 2021 ran from November 1, 2020, through January 31, 2021.

As noted above, overall conditions are improving, but OEMs with SOHO businesses are recovering faster. In the previous two quarters, not a single OEM reported both revenue and profit growth in their printing businesses. This quarter, three did: Brother Printing and Solutions, Epson Printing Solutions, and HP Printing. 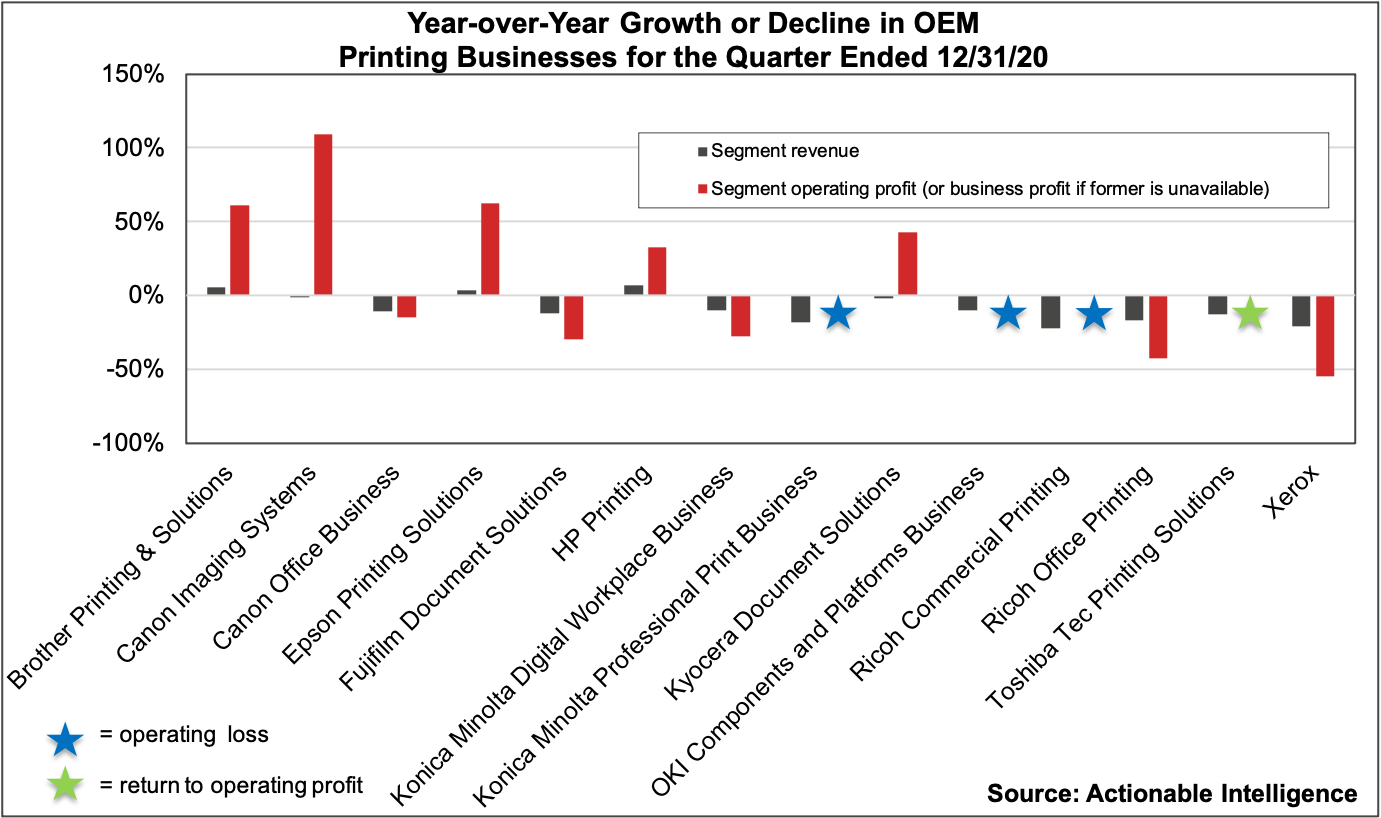 All other printing segments saw both revenue and profits shrink, but the year-over-year declines were mostly smaller than in the previous quarter.

With this quarter’s results announcement, two OEMs—Canon and Xerox—closed the books on FY 2020 and announced new guidance for FY 2021. Canon expects to see rebounds as recovery continues. Xerox was more cautious, saying it projected revenue growth, but the firm declined to provide earnings guidance. HP is one quarter into its FY 2021, but it provided its first full-year guidance following its strong Q1 report. 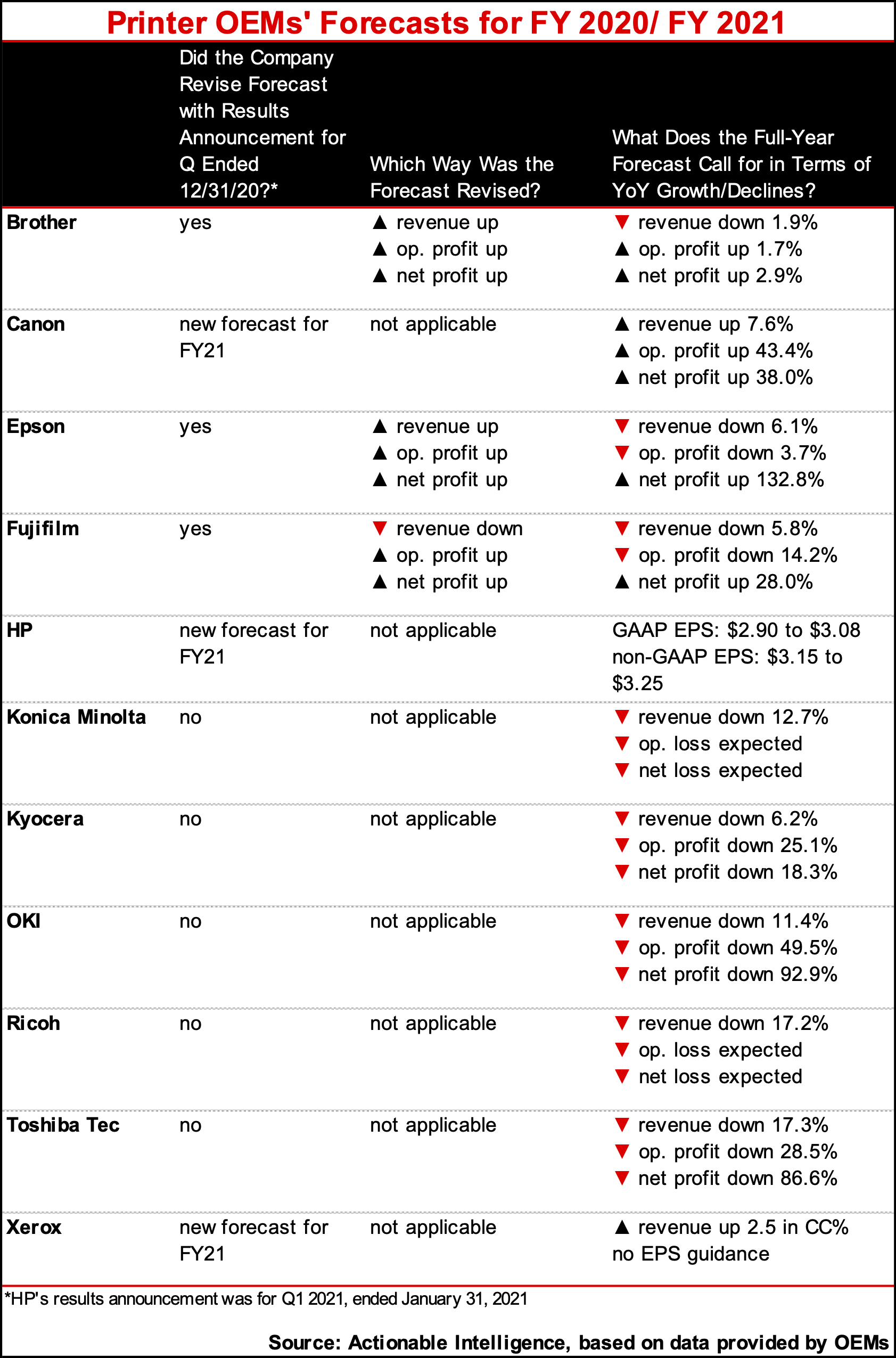 Five OEMs that will wrap up their fiscal year in March left their full-year forecast unchanged. Those companies include Konica Minolta, Kyocera, OKI, Ricoh, and Toshiba Tec. All expect to post significant year-over-year declines due to the negative impact of COVID-19.

Two OEMs, Brother and Epson, actually raised their revenue and profit guidance for the year. Brother now expects to report a modest decrease in revenue for the year but improved profits. Epson expects revenue and operating profit to decline but net profit to surge. Tellingly, both OEMs that lifted their outlook have strong SOHO businesses.

One vendor, Fujifilm, adjusted its revenue guidance down but its profit guidance up. It expects that FY 2020 will result in revenue and operating profit declines but that net profit will hit a record high as a result of the firm making Fuji Xerox a wholly owned subsidiary.

Want to see more about how OEMs performed against their peers in the quarter ended December 31, 2020? We have published a detailed subscriber-only Actionable Briefing on OEMs’ financial performance: “The Printer and MFP Industry Continues to Recover as Work-from-Home Drives Growth for Some.” For information on subscribing to Actionable Intelligence, see our Membership Options page.