In late April and throughout the month of May, printer OEMs announced financial results for the three-month period ended March 31, 2021. The quarter was the fifth since printer and MFP makers began to feel an impact from the coronavirus (COVID-19) pandemic. 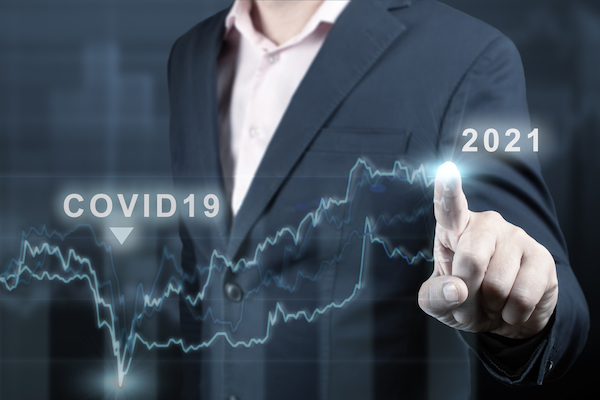 This is significant for a few reasons. First and foremost, most OEMs had an easy comparison because the prior year period was one in which OEMs saw steep downturns as a result of the pandemic. Second, despite the easy comparison, most OEMs are seeing improvements in their businesses as customers adapt to the “new normal.” The small-office/home-office (SOHO) printer business is booming due to continued strong consumer demand and the shift to hybrid work environments in which business support workers in the office, at home, or on the go. Moreover, in the quarter just ended, most OEMs saw improved demand for office equipment and better print volumes than in the early days of the pandemic as more workers returned to the office.

Concerns remain about outbreaks and the spread of new coronavirus variants causing new lockdowns—including most recently in some Asian nations. There is also concern that hybrid work means print volumes will never return to pre-pandemic levels. Moreover, in the quarter ended in March, OEMs faced growing pressure from chip shortages and rising costs for chips and other components. OEMs also saw logistics challenges and a big increase in shipping costs (see “Shipping Industry in Chaos Faces Choppy Seas Ahead”).

Still, after a series of dark, dismal quarters, the quarter ended in March brought a ray of light. That light shone more brightly on some than on others, however.

This quarter five printing businesses were able to post revenue growth: HP Printing (+28.3 percent), Sharp 8K Ecosystem (+28.0 percent; however, this segment includes other businesses and mainly benefited from increased demand for TVs); Epson Printing Solutions (+15.1 percent), OKI Components and Platforms Business (+11.0 percent, but, like Sharp, OKI includes a variety of other businesses in this segment); and Brother Printing and Solutions (+4.4 percent). Firms like HP, Epson, and Brother saw a return to revenue growth as they benefited from growing demand in the consumer/SOHO portions of their business. Other OEMs saw revenue declines ranging from 0.2 percent to 19.0 percent. In comparison, at the height of the pandemic, OEMs reported revenue declines ranging from 15.4 percent to 39.1 percent in the quarter ended in June 2020.

Actionable Intelligence currently covers financial results for the following printer OEMs: Brother, Canon, Epson, Fujifilm, HP, Konica Minolta, Kyocera, Ninestar, OKI, Ricoh, Sharp, Toshiba Tec, and Xerox. For all the Japanese OEMs, except Canon, the period from January 1, 2020, through March 31, 2021, was the fourth quarter of the fiscal year ending March 31, 2021. For Canon and U.S.-based Xerox, this period was the first quarter of fiscal 2021. HP is on a different financial calendar than all the other OEMs. Its second quarter of fiscal 2021 ran from February 1, 2021, through April 30, 2021.

As described above, overall conditions are improving, but OEMs with SOHO businesses are recovering faster. This quarter, four OEM business segments could boast of both revenue and profit growth: Epson Printing Solutions, HP Printing, OKI Components and Platforms, and Sharp 8K Ecosystem. Again, we think OKI’s and Sharp’s growth mostly came from areas outside of printing. The printer businesses that saw both revenue and profits shrink included Ninestar, Ricoh Commercial Printing, and Ricoh Office Printing. All other businesses reported mixed results: either revenue was up and profits were down or vice versa. 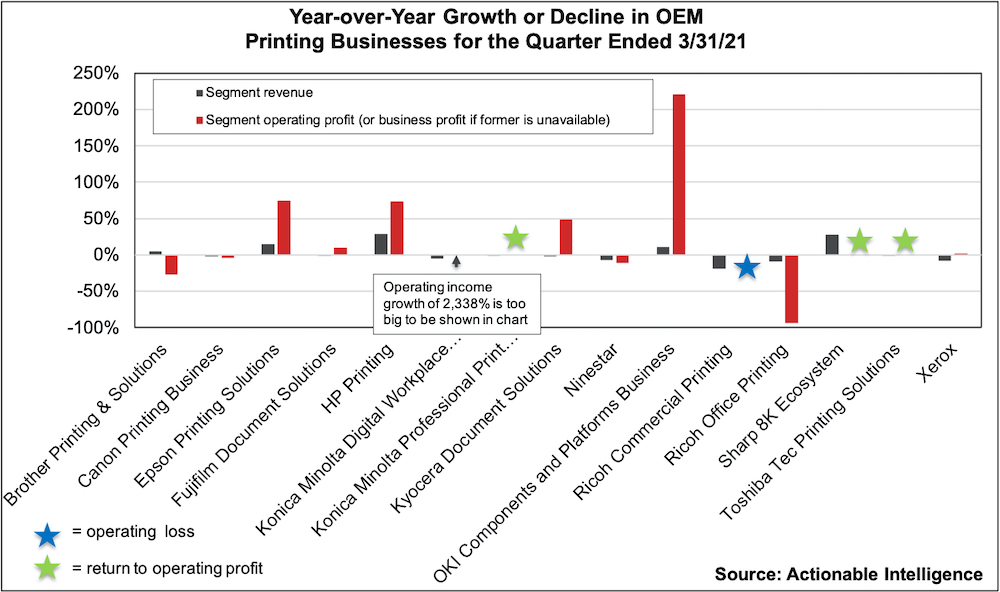 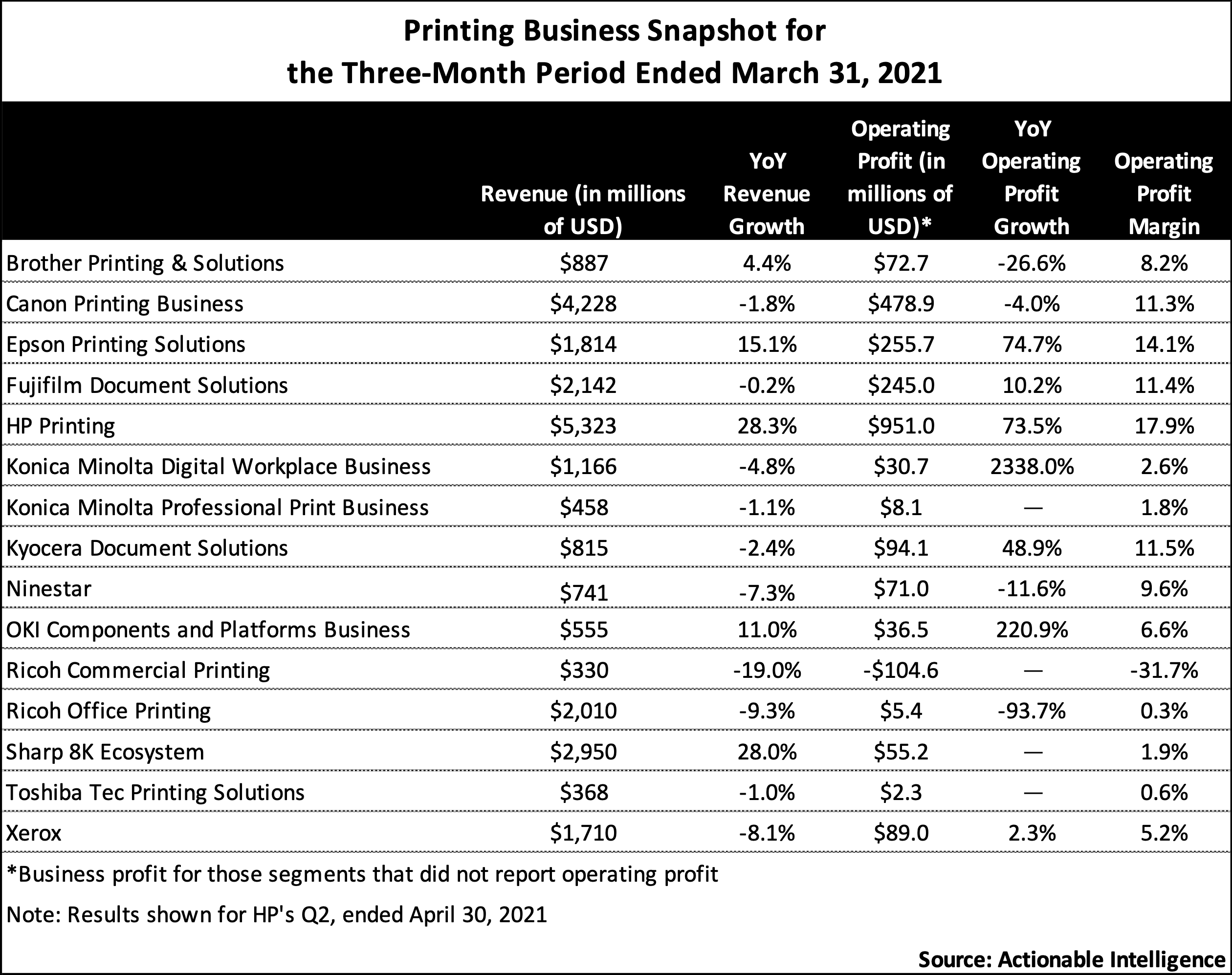 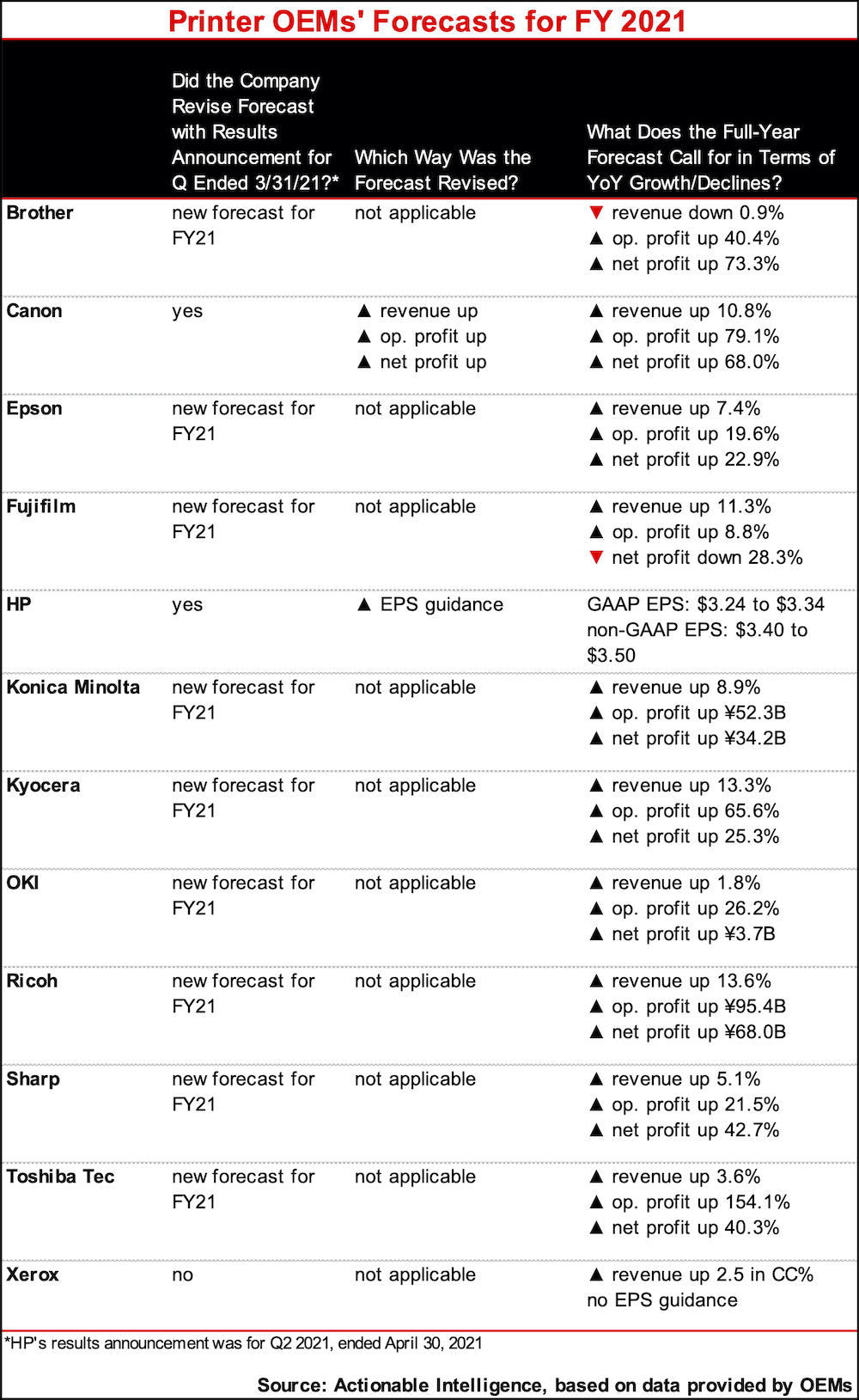 By and large, most OEMs expect FY 2021 to be much brighter than FY 2020. Some exceptions include Brother, which anticipates a modest revenue decline, and Fujifilm, which expects to see net profit decline due to the absence this year of certain one-off factors that benefited it in FY 2020.

Of course, OEMs have an easy comparison. Whether expected growth for FY 2021 will mark a return to pre-pandemic levels varies by vendor.