Over the past 12 months or so, HP Inc. has seized hundreds of thousands of illegal counterfeit products in regions around the globe. Recently, Actionable Intelligence discussed HP’s anti-counterfeiting efforts with Guillaume Gerardin, senior vice president and general manager for Print Supplies, who confirmed that the company’s Anti-Counterfeiting and Fraud (ACF) program has been increasingly busy during the past year and gave us some insight into all the activity. He also told us how HP is faring with its HP Instant Ink with Planet Partners pilot program in Germany, under which it offers Instant Ink customers “renewed” cartridges. In addition, HP shared information with us about efforts to protect its toner cartridge patents in South Korea. 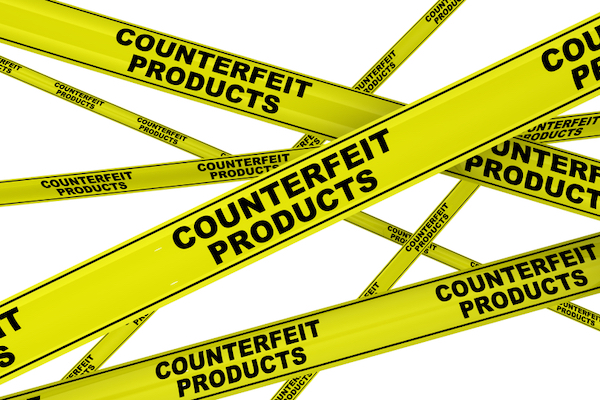 Mr. Gerardin told us that HP has accelerated its ACF efforts as more fake HP products have appeared around the world, especially online, and he expects that the activity will grow going forward. Mr. Gerardin said HP’s goal is to protect its customers from being misled when they shop for the high-quality products the HP brand represents. “That’s our focus, protecting our customers and protecting their experience with HP printers.” He acknowledged the firm also wants to protect its innovations from patent infringement and HP’s brand reputation.

Estimating that HP has seized about 6.6 million counterfeit cartridges in the past eight years, Mr. Gerardin said the level of counterfeiting that happens each year is significant. “In a typical year, we’re seizing around 800,000 cartridges,” Mr. Gerardin said. “And, actually, that’s probably only a fraction of what’s going on all across the globe.” If one includes all the flat boxes, fake labels, and components, he said the firm has helped local law enforcement to seize 56 million counterfeit items during the last eight years. Since the start of 2020, the company has seized counterfeits worldwide, including in Africa, the Americas, Asia, and Europe.

The number of products available online that violate HP’s trademarks and other intellectual property has skyrocketed in the past year. The uptick is being driven by the higher number of purchases being made at ecommerce sites since the outbreak of the coronavirus (COVID-19) pandemic worldwide. According to HP data provided by Mr. Gerardin, the firm’s response to this growing threat is accelerating, too—HP removed 241 percent more online cartridge listings than in 2020. The company has also removed approximately 34,000 patent-infringing ink cartridge listings from online sites in the past year, which is an increase of 217 percent compared to the year prior. HP informed us that 215 online sellers or their affiliated stores have been permanently banned by various marketplaces for selling counterfeits, and 54 online stores were removed for misusing the HP company logo. 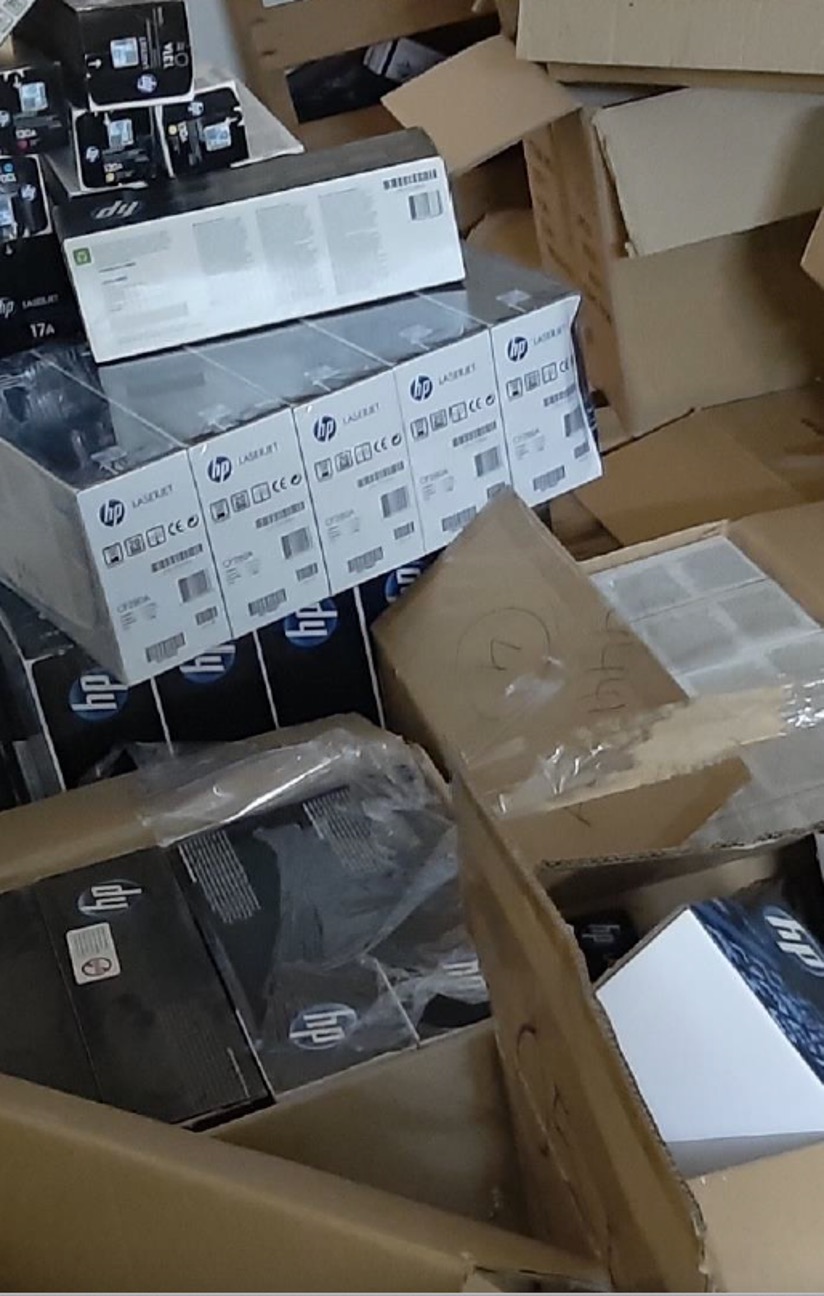 Over the past year or so, local law enforcement seized counterfeit HP products in regions throughout the globe. In raids conducted in Brazil, Colombia, and Paraguay, nearly 10,000 counterfeit items were seized. In Europe, another 5,000 bogus items were nabbed. In 2020 and 2021, the big hauls came in from Africa and the Middle East, where over 500,000 counterfeit HP products were seized, including 130,000 items in Tanzania alone. From December 2020 to February 2021, some 279,000 fake HP products were seized in the Middle East, which includes seizures in Saudi Arabia and in the United Arab Emirates. Although the items included counterfeit laptop batteries and power supplies, Mr. Gerardin said most of the products were illegal fake printer cartridges and components.

Governments and local law enforcement around the world are supporting HP in its efforts to curtail illegal activities, and they value the resources that the firm devotes to combating counterfeiters. “We are proud to be working with government regulators in multiple regions,” said Mr. Gerardin. “And they appreciate what we are doing and what we are trying to do to fight all this illegal activity.” To better protect markets from fakes, HP’s ACF team has been innovative and shares some of its new detection technologies with local authorities. The firm also regularly trains customs agents globally on how to recognize imported counterfeit cartridges in their ongoing inspections—including U.S. Customs and Border Patrol (CBP). 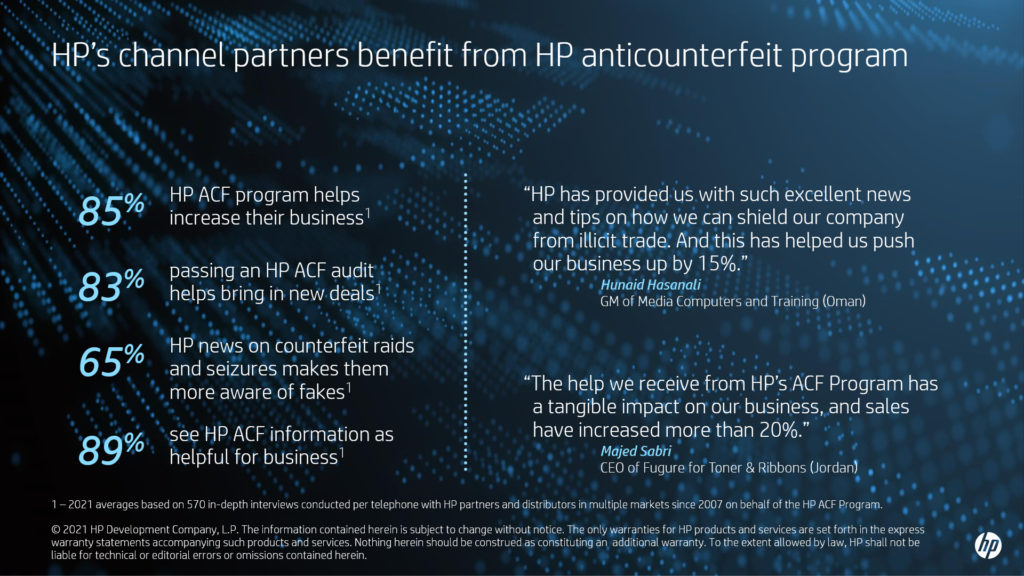 In addition to working with government regulators to protect markets in different regions, HP works with its channel partners to monitor markets and guard against counterfeits. “We have developed a trusted channel-partner ecosystem,” Mr. Gerardin explained. “Our channel partners look on our ACF program very favorably and they see that counterfeit activity hurts them.” He explained that HP’s ACF effort is good for channel business because it slows down regional counterfeiting operations. “They [channel partners]are happy that we do regular audits across the channels to foster control and discourage illegal activities.” He said the channels really benefit when seizures make the headlines because the news deters customers from purchasing HP knockoffs. “It also makes them aware of the potential that they may be purchasing fakes.”

Mr. Gerardin shared some data with us indicating HP’s channel partners appreciate the investments the company puts into ridding global markets of counterfeits. The findings from interviews conducted with 570 HP channel partners show that 85 percent felt the company’s ACF activity helped increase their business and, likewise, 89 percent found the anti-counterfeiting information good for business. Over two-thirds of survey participants felt the firm’s anti-counterfeiting measures made them more aware of fakes.

In addition to reviewing recent ACF activity, Mr. Gerardin updated us on some of the sustainability initiatives that are underway at HP’s Supplies business. He noted that HP CEO Enrique Lores has been outspoken about the firm’s commitment to the environment. Earlier this year, Mr. Lores pledged that HP would achieve net zero greenhouse gas emissions across its value chain by 2040. The initiative is beginning with the Supplies business, which is expected to be carbon neutral by 2030 (see “HP Celebrates Earth Day with Launch of ‘Renewed’ Instant Ink”). “Obviously, this is a very big statement for HP’s Supplies business. There’s no other industry player that I’m aware of that has made such a commitment,” Mr. Gerardin said.

A key goal for HP over the years has been to lower the overall environmental impact of printing. In 2016, the firm achieved zero deforestation for its HP-brand papers. It recently expanded its commitment to maintain zero deforestation for HP paper and paper-based packaging and to counteract deforestation of non-HP paper used in HP products and print services by 2030.

One facet of HP’s transition to carbon neutrality in the Supplies business by 2030 is the recently launched HP Instant Ink with Planet Partners pilot program that is currently running in Germany (see “HP Celebrates Earth Day with Launch of ‘Renewed’ Instant Ink”). In support of its effort to reduce greenhouse gases HP is piloting an operation whereby HP Instant Ink subscribers can opt to receive so-called renewed—or refilled—cartridges.

Mr. Gerardin confirmed that the program kicked off in June and it seems to be off to a good start, although refilling volumes remain small. “We are very happy with the results so far. We weren’t sure how many customers would be willing to participate but the response has been very good.” He said that, in addition to various programs HP is currently running to recycle parts and packaging and use recycled content in its manufacturing processes, renewing empty Instant Ink cartridges supports HP’s goal to reach 75 percent circularity for products and packaging by 2030.

We think that HP’s sustainability efforts should give it a competitive edge, especially when it comes to winning more business from environmentally conscious millennials. Last year, the firm reported that sustainability was a key factor in driving more than $1 billion in sales (see “HP Releases Its 2020 Sustainable Impact Report”). We expect that number will grow. It will also be interesting to see if any HP competitors follow its lead and attempt to make their supplies organizations carbon neutral. Of course, we’re watching the firm’s ink cartridge renewal pilot program with keen interest and will report any related news.

In addition to updating us on its ongoing AFC and sustainability programs, HP informed Actionable Intelligence of a recent favorable ruling in a toner cartridge patent-infringement case (2018 GaHap 552887) heard in South Korea, which we reported on in October 2020 (see “HP Announces Win in South Korean Toner Cartridge Litigation”). The ruling was against the last holdout in the case, ITC Corp. (주식회사 아이티씨), which sells toner cartridges online at www.inksidae.com.

In its most recent ruling in the matter, the court in Seoul found ITC Corp. had violated the patent in question and ordered the defendant:

According to HP, the appeal period ended in May 2021, thereby making the ruling final.

We note that this is the second time HP has successfully asserted protections for Korean patent KR10-1298649. In 2020, the patent was at the center of the firm’s first-ever lawsuit in South Korea, which was also HP’s first toner cartridge patent-infringement lawsuit. As part of the acquisition deal, Samsung continues to market printers based on HP engines in South Korea under its brand. Samsung printers and the Samsung brand in general hold some sway in that country, so clearly HP wants to rid the market of infringing products.

With two legal victories under its belt, we expect to see HP continue to assert its toner cartridge patents. Obviously, the firm is monitoring the South Korean market for infringing products and we would not be surprised to see the activity grow more global. Prior to the 2017 acquisition, Samsung had mounted various successful legal campaigns across Europe, including in such countries as France, Germany, and the Netherlands. Presumably, the region still has a  healthy installed base of Samsung devices as well as newer HP machines with Samsung technology. It would come as no surprise to see HP’s legal team grow more aggressive in Europe as well as in other markets.