In late January and throughout February, printer original equipment manufacturers (OEMs) announced financial results for the three-month period ended December 31, 2021. Here, we look specifically at the performance of these companies’ business segments that include home and office printer hardware, supplies, and related software and services. 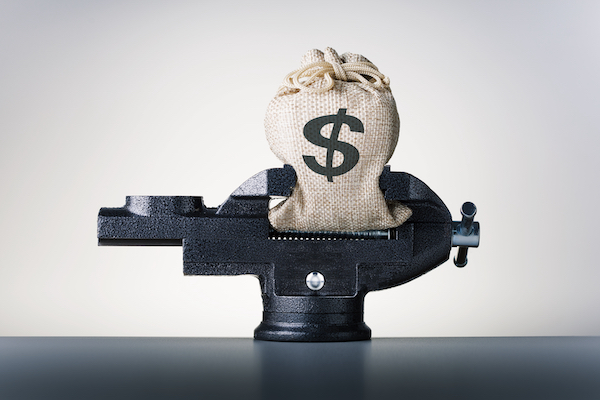 At this point, more than two years after COVID-19 began, the problems that OEMs are facing amid the pandemic are not new. They include shortages and rising costs for semiconductors and other components, shipping delays and increased transportation costs, lockdowns at Asian factories that have hurt production, and product shortages and growing order backlogs. But if the most recent quarter had a theme for OEMs, it is that these challenges are now taking a bigger bite out of revenue and especially profits.

Actionable Intelligence currently covers financial results for the following printer OEMs: Brother, Canon, Epson, Fujifilm, HP, Konica Minolta, Kyocera, Ninestar, OKI, Ricoh, Sharp, Toshiba Tec, and Xerox. For all the Japanese OEMs, except Canon, the period from October 1, 2021, through December 31, 2021, was the third quarter of the fiscal year ending March 31, 2022. For Canon, U.S.-based Xerox, and China-based Ninestar, this period was the fourth quarter of fiscal 2021. HP is on a different financial calendar than all the other OEMs. Its first quarter of fiscal 2022 ran from November 1, 2021, through January 31, 2022. Ninestar has yet to report its results for Q4 and won’t do so until April. Thus, we excluded the firm from our comparisons this quarter.

Figure 1 presents a snapshot of the financial performance of OEMs’ printing business in their most recent quarter. Xerox does not provide separate results for a printing segment, so the results shown are those for the company as a whole. It is also worth noting that while the segments shown are those that include OEMs’ printing hardware and supplies businesses and related software and services, some OEMs include other business lines in these segments, too, which means that the performance of these segments may not entirely be a reflection of the performance of their printing businesses. Sharp, for example, includes its enormous TV business in its 8K Ecosystem Business, and OKI includes ATMs, terminals, circuit boards, and consigned manufacturing in its  Components and Platforms Business. 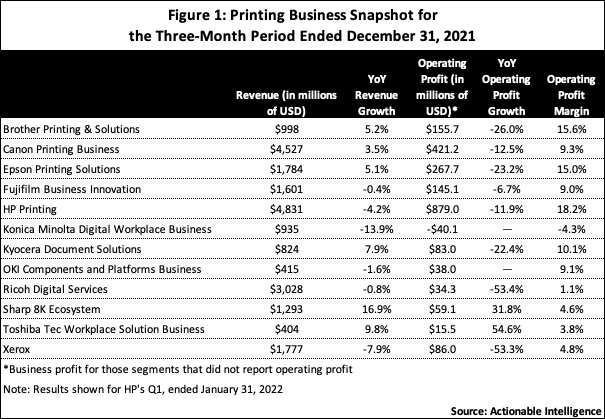 Overall, things have steadily gotten more challenging for OEMs since the quarter ended June 30, 2021, when every single OEM could boast of improved revenue and profits in their printing business (see “OEMs Report Big Improvements in Quarter Ended in June 2021”). Due largely to supply-chain challenges, OEMs posted either lower growth rates or declines in the quarter ended September 30, 2021 (see “OEMs Report Uneven Results in Quarter Ended in September 2021 as Supply-Chain Issues and Shortages Worsen”). Then, in the quarter ended December 31, 2021, things grew worse due to unrelenting chip and component shortages, rising costs for these components and logistics, and the omicron coronavirus variant causing production challenges and product shortages. 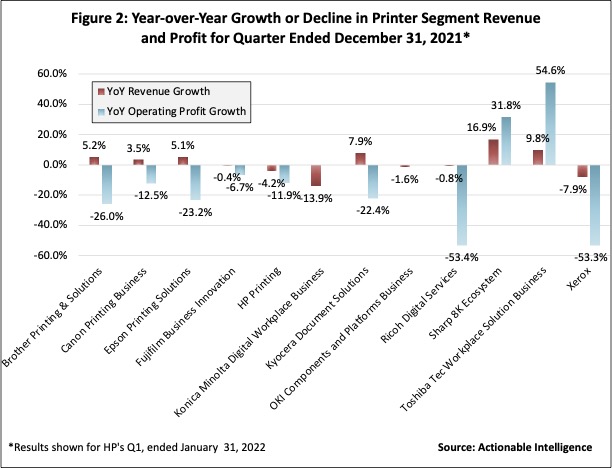 Figures 3 and 4 divvy these same numbers up differently. Figure 3 shows year-over-year revenue growth or decline for the quarter from the strongest growth (Sharp 8K Ecosystem) to the biggest decline (Konica Minolta Digital Workplace Business). Figure 4 shows the year-over-year percentage change in segment operating profit, again from best performer (Toshiba Tec Workplace Solutions Business) to worst (Ricoh Digital Services). It is not possible to show percentage growth/decline for either Konica Minolta’s Digital Workplace Business or OKI’s Components and Platforms Business. In Konica Minolta’s case, the segment was profitable, but it had a loss in the year-ago period. In OKI’s case, it is because the segment had an operating loss in the most recent quarter. 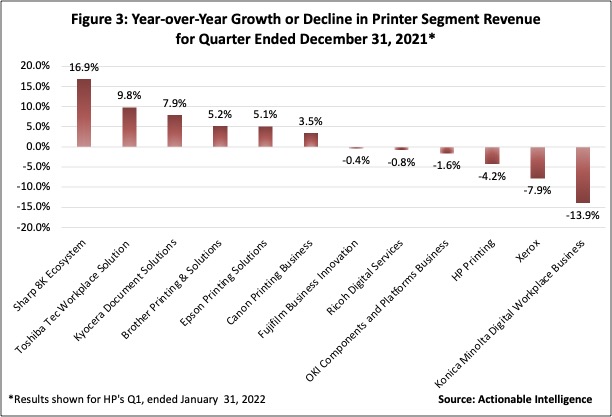 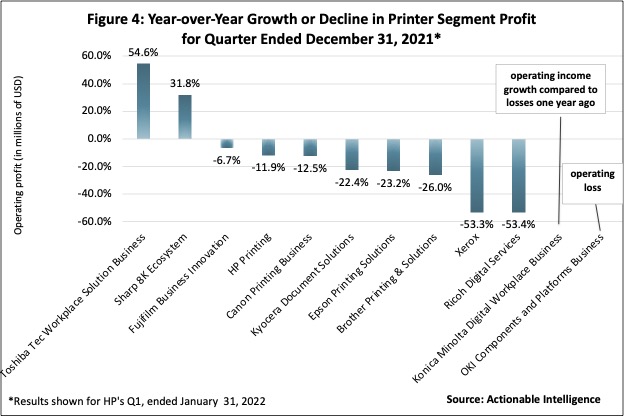 Of course, the above figures just show growth rates, not how much each printing business actually brought in. Figure 5 shows how much revenue each OEM’s printing business delivered in the latest quarter. It is no surprise that HP’s Printing business is in the lead. Now that Canon moved its inkjet business in with MFDs and laser printers into a bigger Printing Business, it is a close number two. We should note that although Toshiba Tec’s Workplace Solutions segment is the smallest in terms of total revenue, OKI’s  Components and Platforms business would actually be the smallest in terms of total revenue from printing products if we were to subtract out other product lines included in this segment. 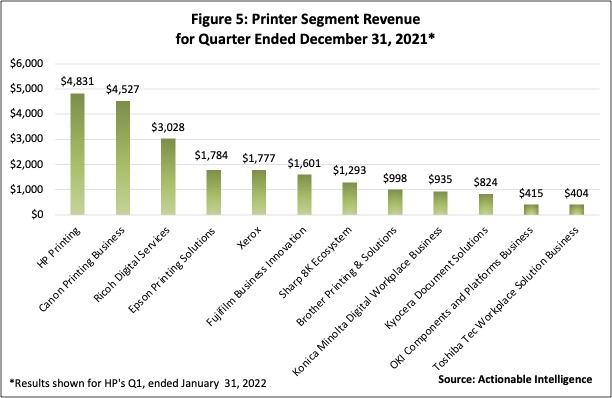 Figure 6 shows how much segment profit each OEM reported in their most recent quarter. Again, HP and Canon are in the number-one and number-two spots, with Epson in number three and Brother in number four. That would seem to be an indication that those OEMs who have robust SOHO businesses were most profitable. Profits were slimmer for firms specializing in A3 MFPs. Konica Minolta’s Digital Workplace Solutions Business was in last place, as the only segment reporting an operating loss last quarter. 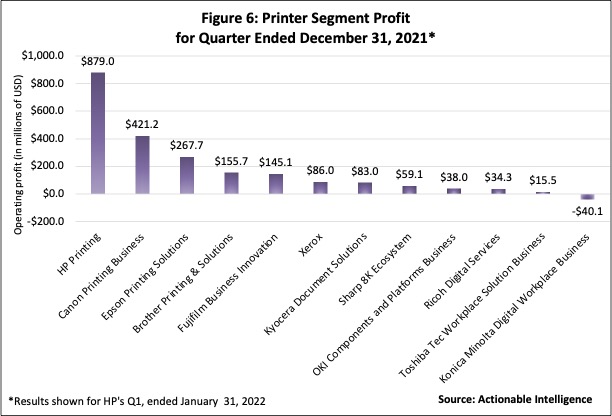 Figure 7 compares operating profit margin in OEMs’ printing business. There, HP is in the lead, followed by Brother, Epson, and Kyocera, all of which had double-digit operating margins. Again, Konica Minolta’s Digital Workplace Solutions Business fared the worst as it had a negative operating margin. 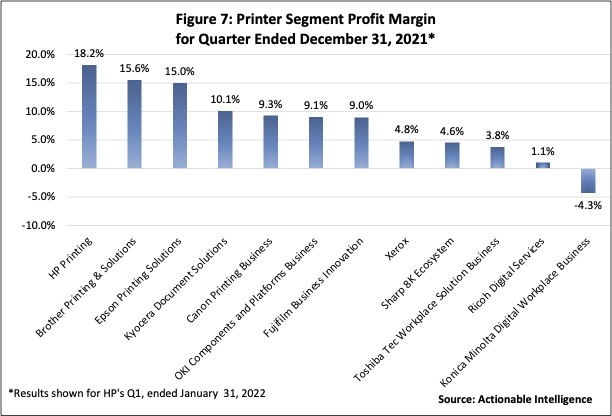 Figure 8 shows OEMs’ guidance for the performance of the company as a whole—a good measure of how optimistic or pessimistic each vendor is feeling about business. Because Canon and Xerox wrapped up FY 2021 this quarter, they each provided some guidance for FY 2022. Canon expects to post revenue and profit growth, albeit at lower rates than in FY 2021. Xerox’s guidance was more cursory, but it did say it expects to see revenue grow. Eight OEMs revised their guidance for FY 2021 or FY 2022. Six OEMs—Brother, Epson, Fujifilm, HP, Konica Minolta, and Toshiba Tec—raised certain forecast numbers. Two, OKI and Sharp, made downward revisions, although Sharp did increase its guidance for net profit. 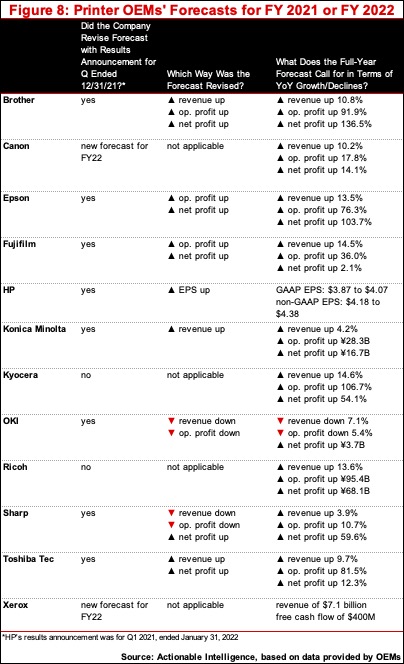 Despite the challenges in their most recent quarters, most OEMs expect to post growth in the year ahead. The lone exception is OKI, which expects net profit growth but a decrease in revenue and operating profit.