In late April and throughout May, printer original equipment manufacturers (OEMs) announced financial results for the three-month period ended March 31, 2022. At this point, over two years since the start of the pandemic, COVID-19 continues to be a major force impacting OEM results. Now the impact is less from school and office shutdowns—although the shift to hybrid work remains a factor that is depressing office printing—and more from the resultant tumult in global supply chains and production. In recent quarters, OEMs have struggled with chip shortages, rising component and raw material prices, rising logistics costs, transportation delays, and COVID-related (and sometimes fire- and explosion-related) factory shutdowns, all of which have led to product shortages. And those product shortages and rising costs have taken a big bite from OEMs’ revenue and profits. 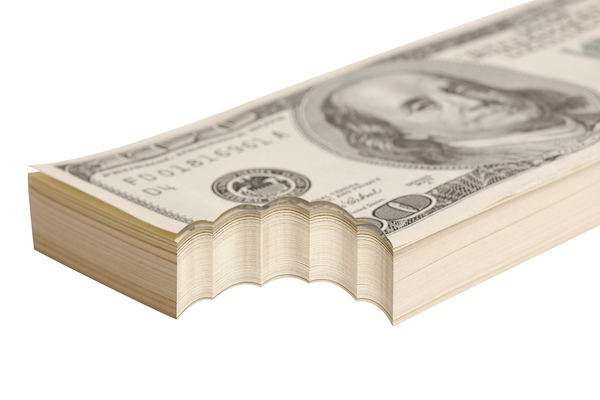 In general, if the quarter ended in March 2022 had a theme, it is that several OEMs had thought the quarter would prove better than it did, and more than one OEMs missed its full-year forecast as a result of the disappointing quarter. But, as is usually the case, some OEMs fared better than others—maybe not as much as they had hoped—but more firms this quarter than last quarter were able to boast of both revenue and profit growth in their printing businesses.

Actionable Intelligence currently covers financial results for the following printer OEMs: Brother, Canon, Epson, Fujifilm, HP, Konica Minolta, Kyocera, Ninestar, OKI, Ricoh, Sharp, Toshiba Tec, and Xerox. For all the Japanese OEMs, except Canon, the period from January 1, 2022, through March 31, 2022, was the fourth quarter of the fiscal year ending March 31, 2022. For Canon, U.S.-based Xerox, and China-based Ninestar, this period was the first quarter of fiscal 2022. HP is on a different financial calendar than all the other OEMs. Its second quarter of fiscal 2022 ran from February 1, 2022, through April 30, 2022. Here, we look specifically at the performance of OEMs’ business segments that include home and office printer hardware, supplies, and related software and services.

Figure 1 presents a snapshot of the financial performance of OEMs’ printing businesses for their most recent quarter. Readers should bear in mind that while the segments shown are those that include OEMs’ home and office printing hardware and supplies businesses and related software and services, some OEMs include other business lines in these segments, too. Most notably, Sharp includes its enormous TV business in its 8K Ecosystem Business, and OKI includes ATMs, terminals, circuit boards, and consigned manufacturing in its Components and Platforms Business. While Ninestar does share selected segment-level results in some quarters, it does not do so every quarter, and because most of the company is home and office print-related, with the exception of a portion of its chip business, we show results for Ninestar as a whole. Ninestar has the Lexmark and Pantum printer businesses plus a third-party consumables business. Xerox used to report results for the company as a whole rather than by segment, but, starting this quarter, the company is reporting results for two segments, including a Print and Other segment, which is our focus here. 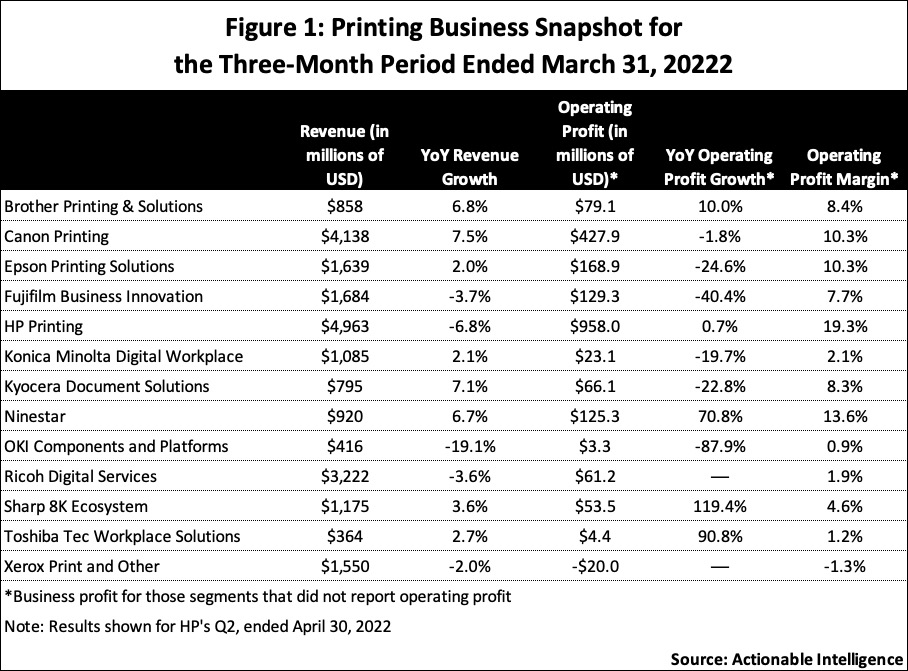 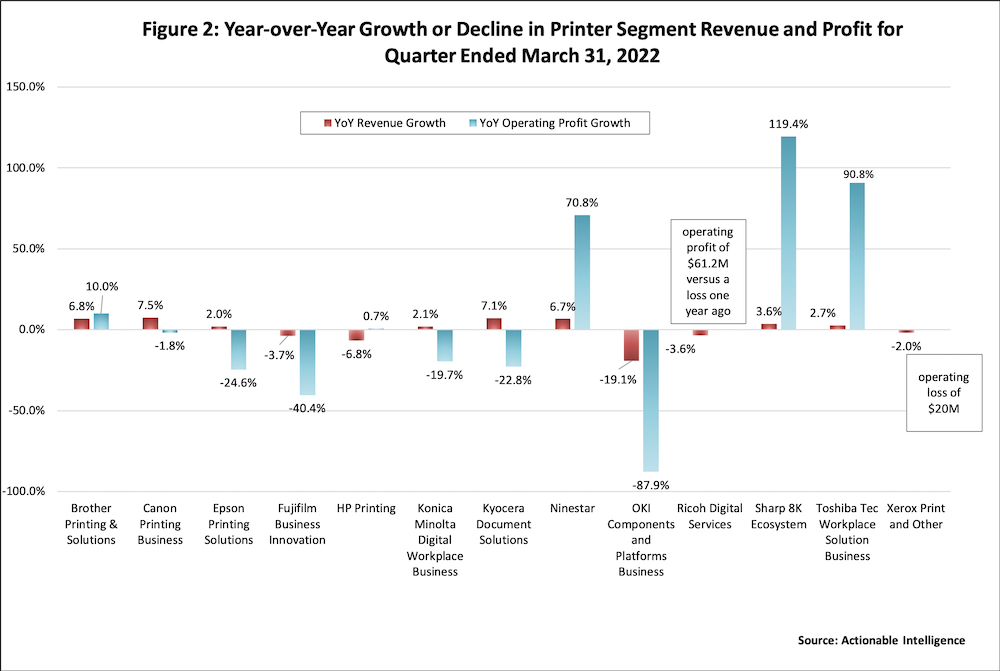 Figures 3 and 4 show these same numbers differently. Figure 3 shows year-over-year revenue growth or decline for the quarter from the OEM with the strongest growth (Canon Printing) to the biggest decline (OKI Components and Platforms). Figure 4 shows the year-over-year percentage change in segment operating profit, again from best performer (Sharp 8K Ecosystem) to worst (OKI Components and Platforms). It is not possible to show percentage growth/decline for either Ricoh’s Digital Services Business or Xerox’s Print and Other Business. In Ricoh’s case, the segment was profitable, but it had a loss in the year-ago period. In Xerox’s case, it is because the segment had an operating loss in the most recent quarter. In fact, it was the only printing business among those shown with an operating loss. 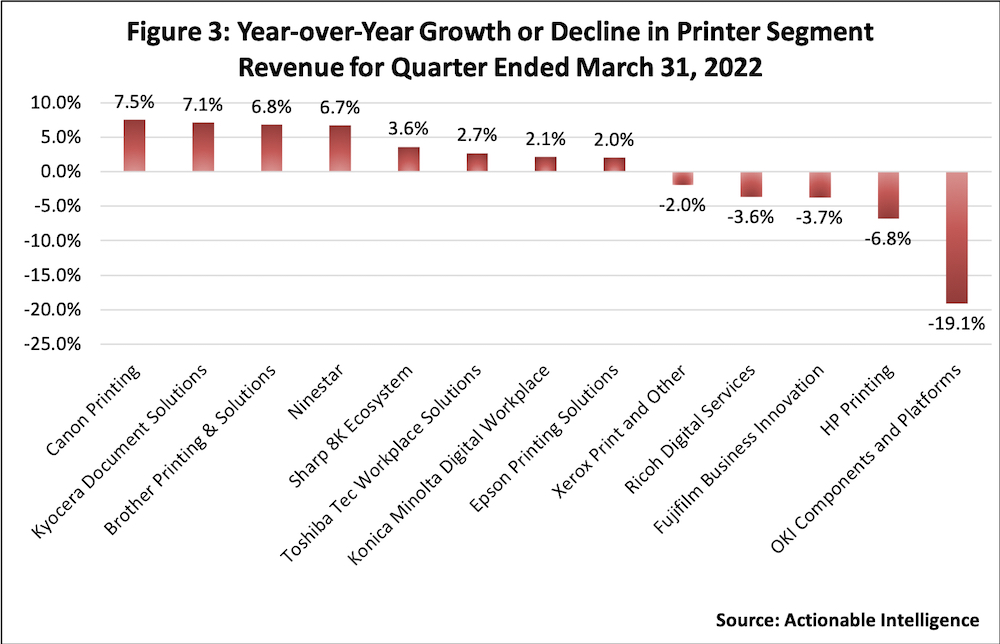 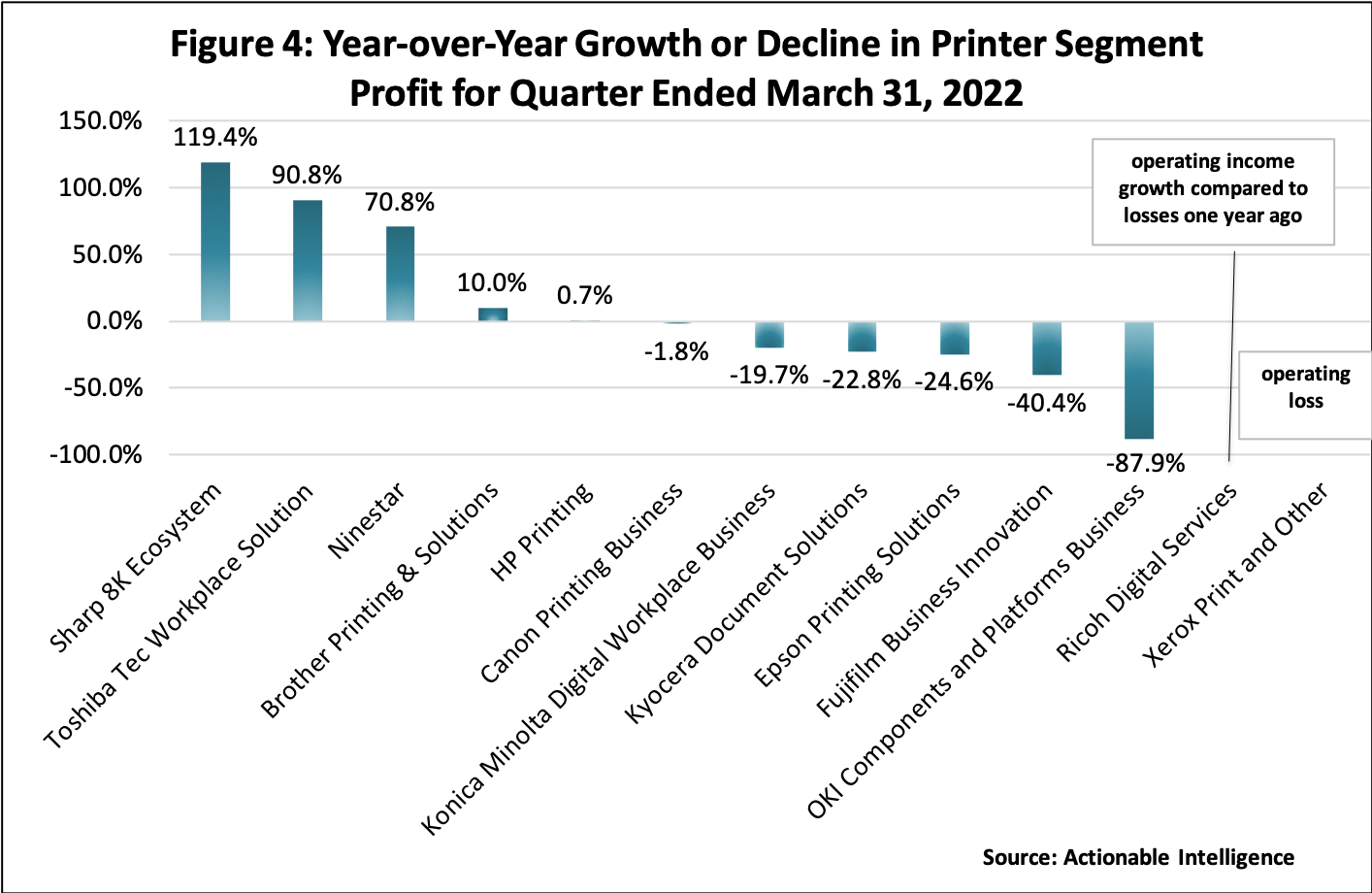 Of course, the above figures just show growth rates, not how much each printing business actually brought in. Figure 5 shows how much revenue each OEM’s printing business delivered in the latest quarter. It is no surprise that HP’s Printing Business is in the lead with Canon’s Printing Business at number two. Although Toshiba Tec’s Workplace Solutions segment is the smallest in terms of total revenue, OKI’s Components and Platforms Business would actually be the smallest in terms of total revenue from printing products if we were to subtract the other product lines included in this segment. One thing that was notable this quarter is that Ninestar has grown to be a sizeable OEM. This quarter, Ninestar as a whole had more revenue that Brother’s Printing and Solutions business, Kyocera’s Document Solutions Business, OKI’s Components and Platforms Business, and Toshiba Tec’s Workplace Solutions Business. When we were doing similar comparisons in the quarters ended September 30, 2020, and June 30, 2020, Ninestar was smaller in terms of total revenue than all these businesses (see “A Battered Print Industry Begins to Show Some Signs of Life” and “OEMs Look into the Abyss in Industry’s Toughest Quarter Ever”). The difference is that Ninestar has since acquired 100 percent of Pantum, which is the industry’s fastest-growing printer vendor. 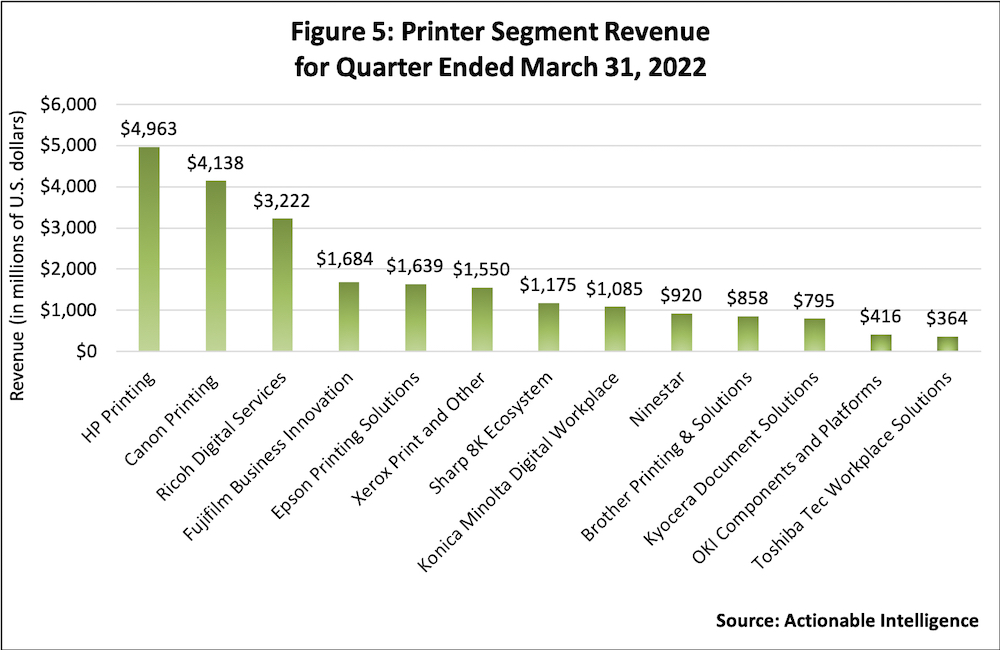 Figure 6 shows how much segment profit each OEM reported in their most recent quarter. HP Printing is in the lead by far, with more than twice as much profit as number-two Canon Printing. In the third, fourth, and fifth spots are Epson Printing Solution, Fujifilm Business Innovation, and Ninestar. Coming in at the less profitable end of the spectrum were Toshiba Tec’s Workplace Solutions Business and OKI’s Components and Platforms Business, which each had profits of under $10 million. As noted above, Xerox was the worst performer in this area with a $20 million operating loss. 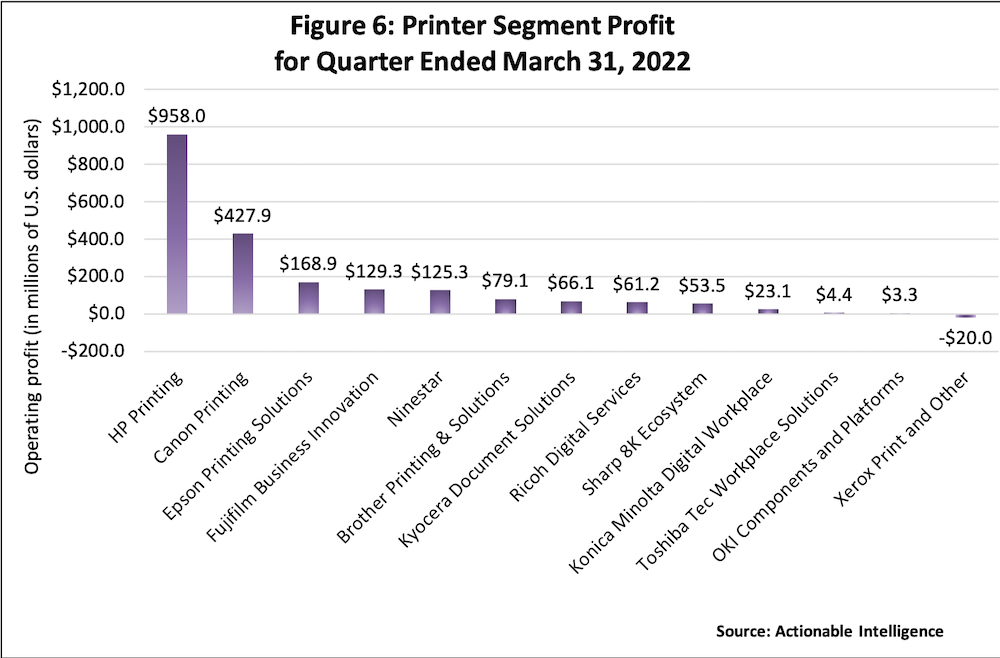 Figure 7 compares operating profit margin in OEMs’ printing businesses. Here, HP’s Printing Business is again in the lead. Its 19.3 percent margin is 5.7 percentage points higher than that of number-two Ninestar. Canon Printing and Epson Printing Solutions were tied for third place, each with a 10.3 percent margin, followed by Brother, Epson, and Kyocera, all of which had double-digit operating margins. Xerox Print and Other clearly had the worst operating margin as it was the only group with a negative operating margin, but Ricoh Digital Services, Toshiba Tec’s Workplace Solutions, and OKI’s Components and Platforms all had operating profit margins of less than 2 percent. 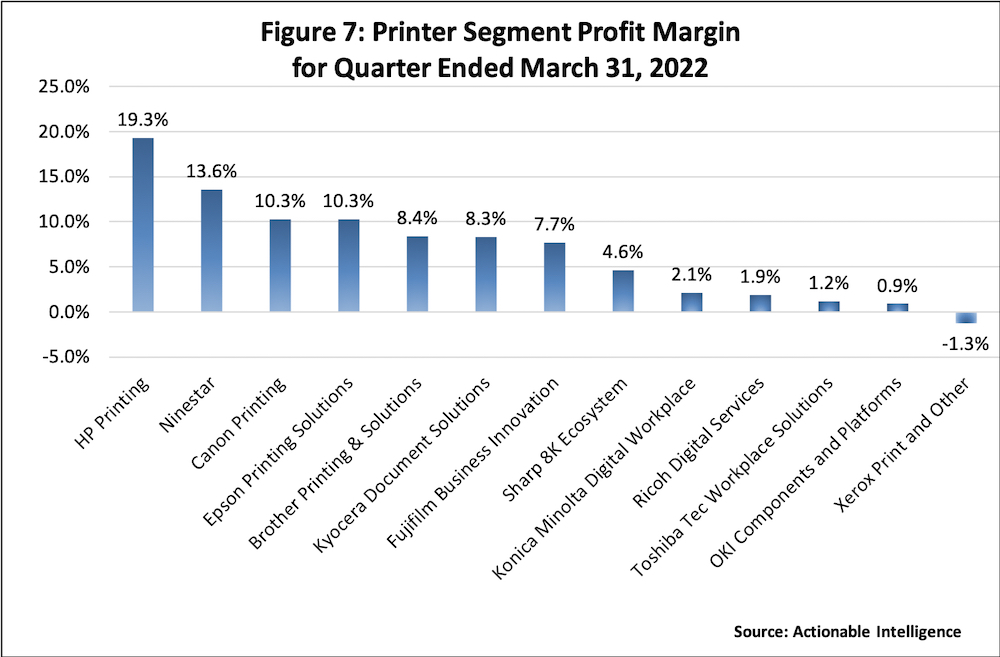 Because the quarter ended March 31, 2021, marked the end of the year for most Japanese OEMs, we saw a lot of new forecasts for FY 2022 issued this quarter, including from Brother, Epson, Fujifilm, Konica Minolta, Kyocera, OKI, Ricoh, and Toshiba Tec (see Figure 8). Sharp has yet to provide a forecast for the year but indicated it will do so soon. Konica Minolta, Kyocera, OKI, Ricoh, and Toshiba Tec all expect to report improved revenue and profits in the year ahead. Brother expects to post improved revenue but lower operating and net profit. Epson and Fujifilm anticipate higher revenue and operating profit but lower net profit. 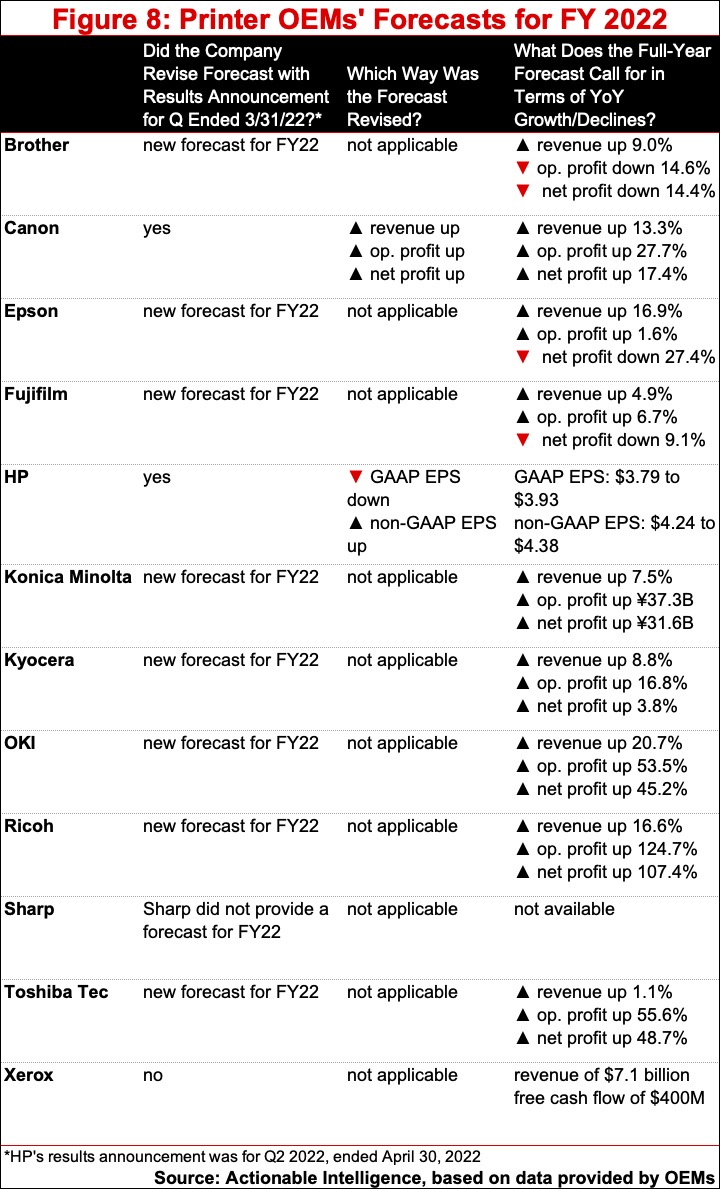 Two OEMs—Canon and HP—revised their guidance for FY 2022. Canon revised its full-year targets upward, while HP made some mixed changes to earnings per share (EPS) guidance. Xerox does not provide much in the way of guidance for the year ahead, but it left its outlook unchanged.

If you want the most up-to-date information on printer OEMs’ financial performance, legal issues, new product introductions, and other topics impacting the printer and MFP hardware and supplies industry, subscribe to Actionable Intelligence. For a limited time (now through July 1, 2022), we are offering $100 off the price of an annual subscription. Simply enter the coupon code SAVE100 at checkout.