In October and November, original equipment manufacturers (OEMs) of printers and MFPs announced their financial results for the three-month period ended September 30, 2022. 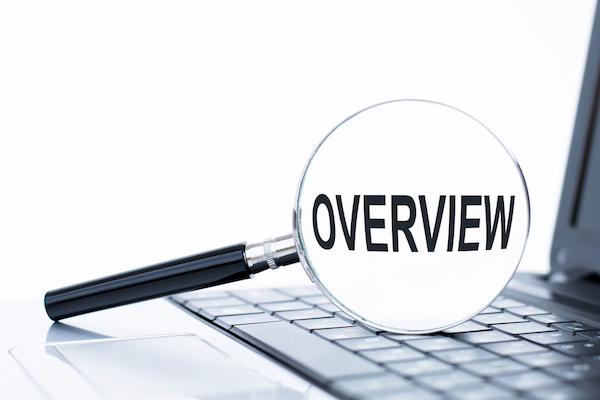 There was no one overarching trend this quarter but instead multiple trends impacting vendors in a multitude of ways. Key among them are the following:

Actionable Intelligence currently covers financial results for the following printer OEMs: Brother, Canon, Epson, Fujifilm, HP, Konica Minolta, Kyocera, Ninestar, Ricoh, Sharp, Toshiba Tec, and Xerox. For all the Japanese OEMs, except Canon, the period from July 1, 2022, through September 30, 2022, was the second quarter of the fiscal year ending March 31, 2023. For Canon, U.S.-based Xerox, and China-based Ninestar, this period was the third quarter of fiscal 2022. HP is on a different financial calendar than all the other OEMs. Its fourth quarter of fiscal 2022 ran from August 1, 2022, through October 31, 2022. Here, we look specifically at the performance of OEMs’ business segments that include home and office printer hardware, supplies, and related software and services.

Figure 1 presents a snapshot of the financial performance of OEMs’ printing businesses for their most recent quarter. Readers should bear in mind that while the segments shown are those that include OEMs’ home and office printing hardware and supplies businesses and related software and services, OEMs other business lines in these segments, too. Most notably, Sharp includes its enormous TV business in its 8K Ecosystem Business. Meanwhile, because all of Ninestar is focused on home and office printing with the exception of a portion of its chip business, we show results for Ninestar as a whole. 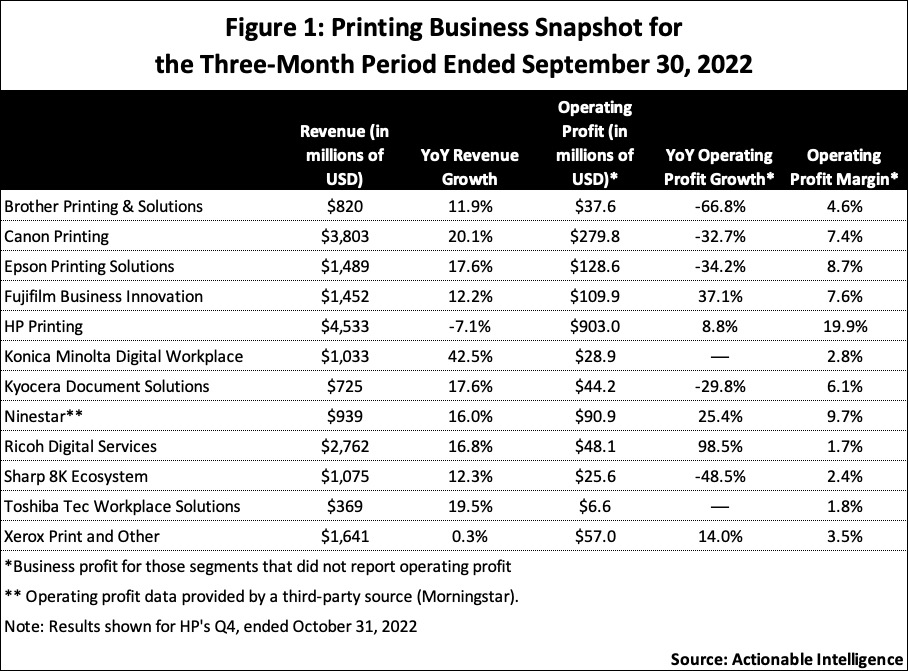 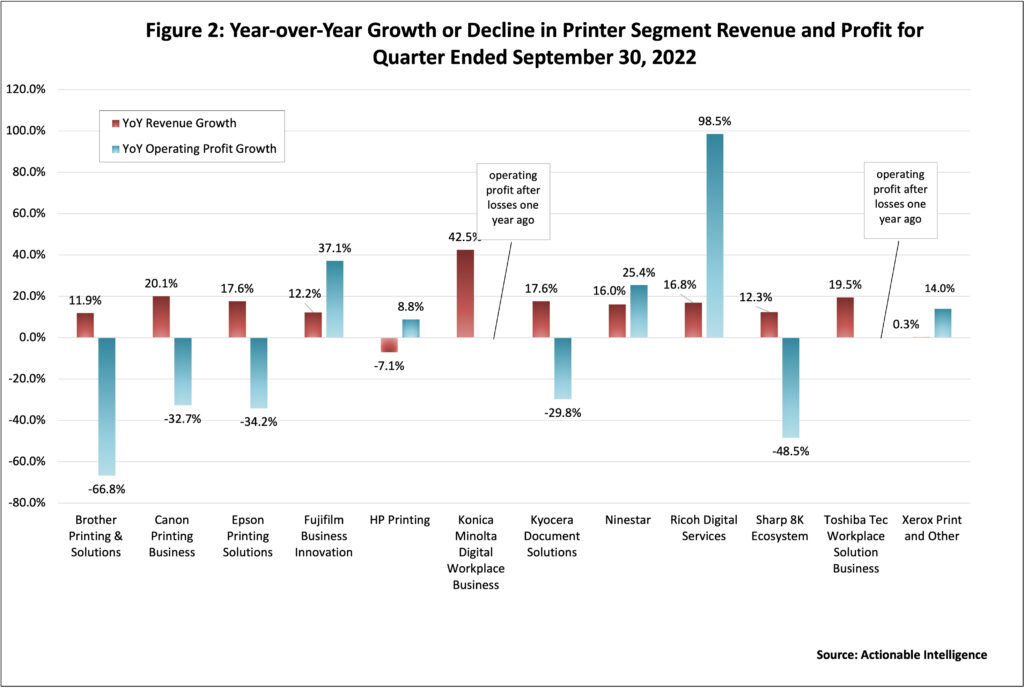 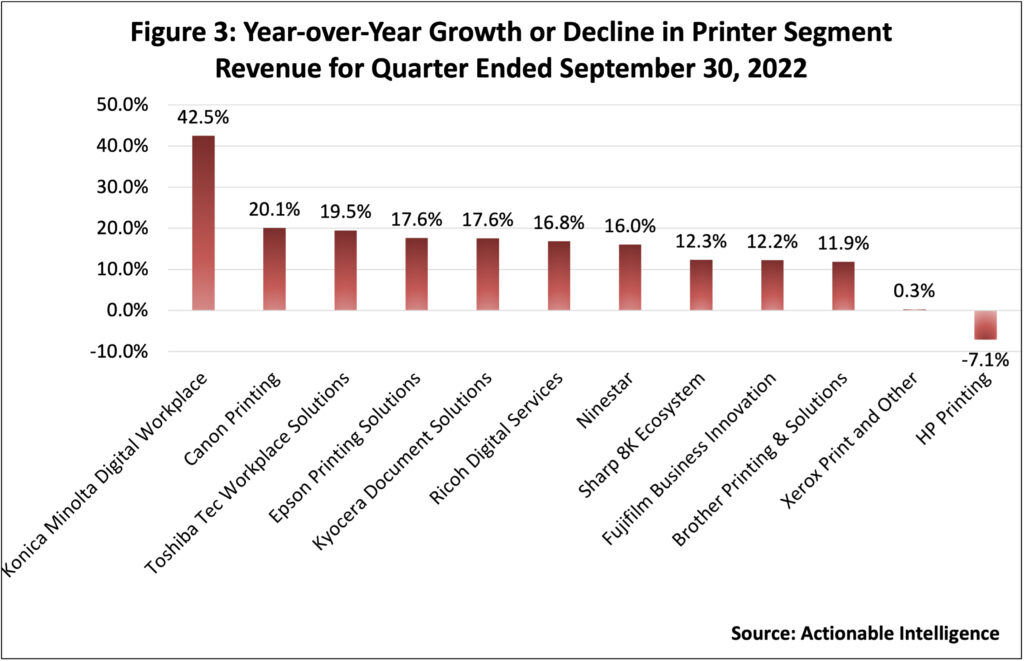 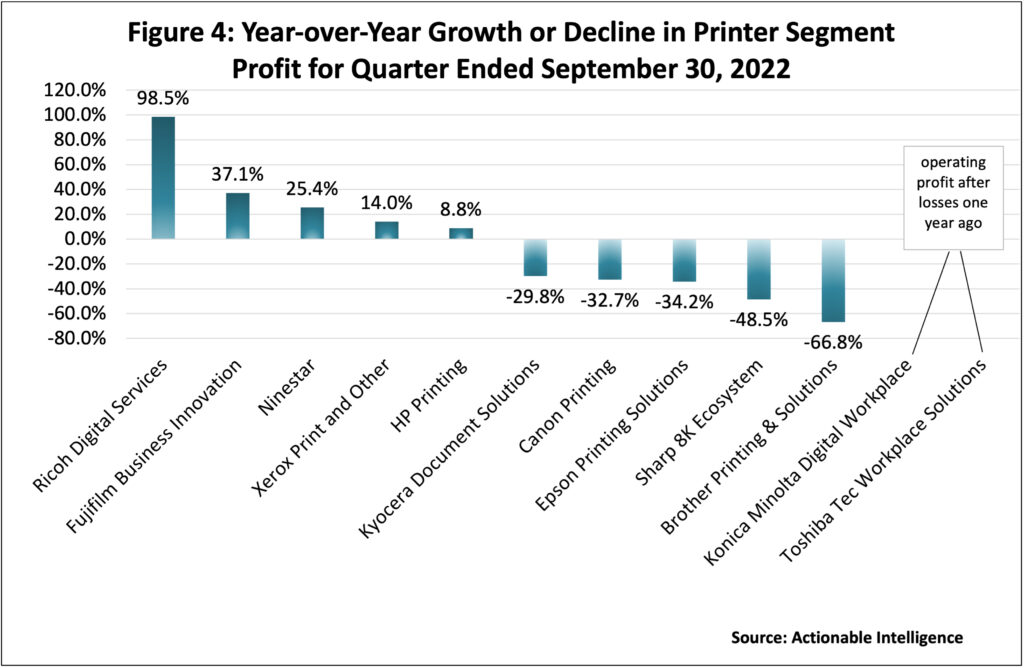 Figure 5 shows how much revenue in U.S. dollars each OEM’s printing business generated in the quarter ended September 30, 2022. There has been very little change in how vendors are ranked in terms of total revenue. HP Printing, Canon Printing, and Ricoh Digital Services remain the three biggest print-related businesses in terms of total revenue while Brother Printing and Solutions, Kyocera Document Solutions, and Toshiba Tec Workplace Solutions remain the three smallest. The only change we noticed is that whereas last quarter Ninestar brought in more revenue than Konica Minolta’s Digital Workplace Business, the opposite is true for the quarter ended September 30, 2022. 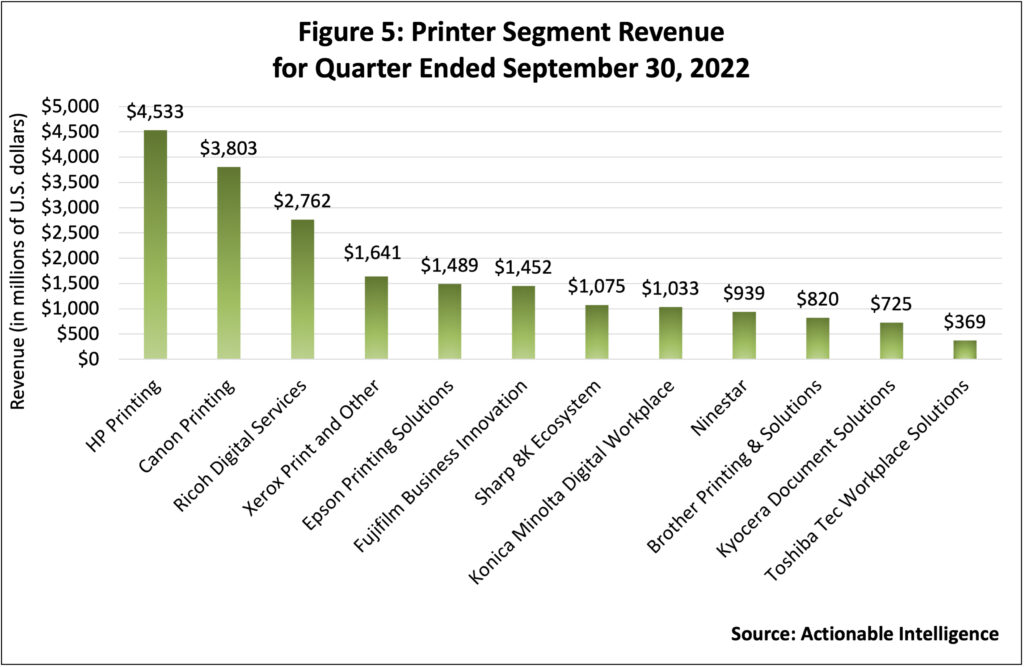 Figure 6 shows the OEMs’ printer segment profits in U.S. dollars. One thing that caught our attention is that for the first time in many quarters, no business had an operating loss—all were in the black. HP Printing, Canon Printing, and Epson Printing Solutions remain the three businesses that bring in the most profits. However, Fujifilm Business Innovation moved up to bring in the fourth most profits. Last quarter, Fujifilm Business Innovation was ranked sixth. Also notable is that Brother Printing and Solutions was ranked ninth in terms of profits this quarter—that’s down from being the fourth most profitable business in the prior quarter. 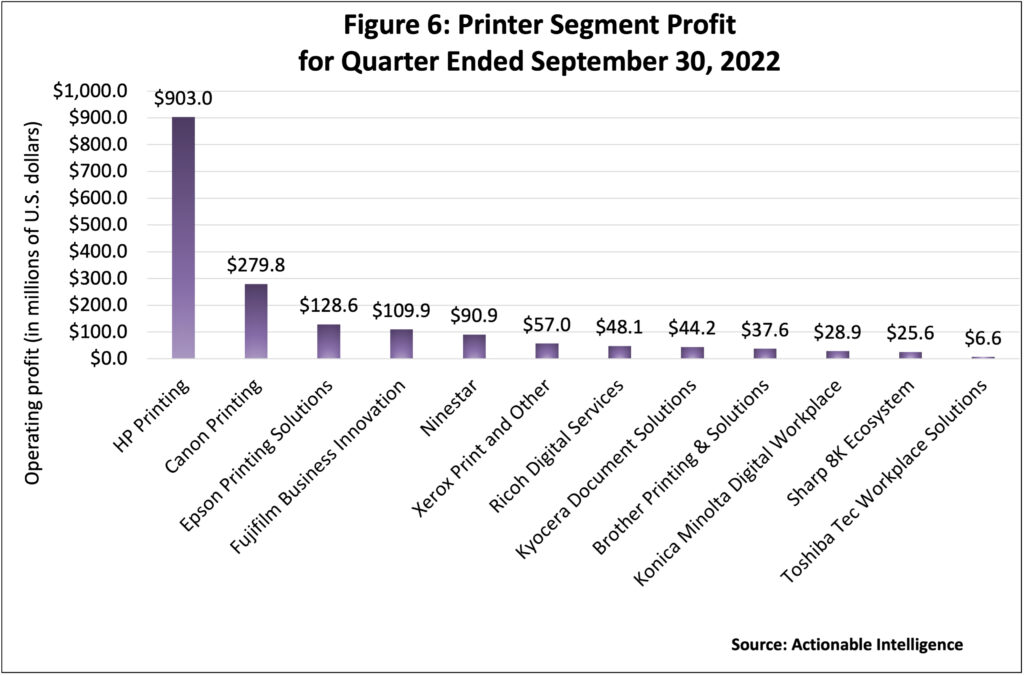 Figure 7 shows the operating profit margin in OEMs’ printing businesses. One thing that is notable is that HP remained the vendor with the best margin—19.9 percent, which is the exact same margin it had in the prior quarter. Another thing that grabbed our attention is that a number of firms are seeing margins dwindle due to higher costs, shrinking supplies sales, product shortages, or some combination thereof. Last quarter, four other businesses in addition to HP (Brother Printing and Solutions, Ninestar, Canon Printing, and Epson Printing Solutions) all has operating profit margins above 10 percent. This quarter, only HP had a double-digit operating profit margin. 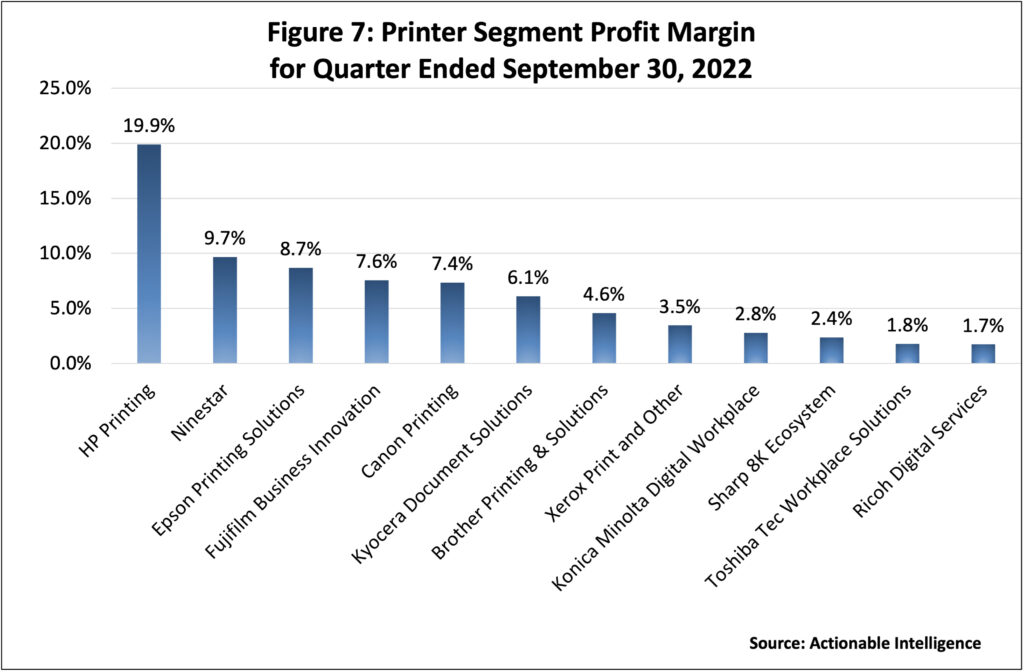 Below we have summarized the performance of the various OEMs we track, keeping the focus on their home and office hardware and supplies businesses. For more information, click on the links below to access our detailed coverage of these companies’ financial results.

The quarter ended September 30, 2022, inspired nearly every single OEM to adjust its guidance. A whopping nine OEMs adjusted their companywide forecasts. One major reason for all the adjustments is Japanese companies are seeing steeper-than-expected yen depreciation. With favorable currency exchange as a headwind, Brother, Canon, Epson, Fujifilm, Konica Minolta, Ricoh, and Toshiba Tec all raised FY 2022 revenue guidance. Epson and Fujifilm said they expected higher operating and net profits, too. Canon raised its guidance for operating profit but lowered its projected net profit. Ricoh, Sharp, and Toshiba Tec all lowered operating and net profit guidance. Over in the United States where currency exchange is a headwind, Xerox lowered revenue guidance. HP provided its initiation forecast for FY 2023 and said it expects to see earnings per share decline. 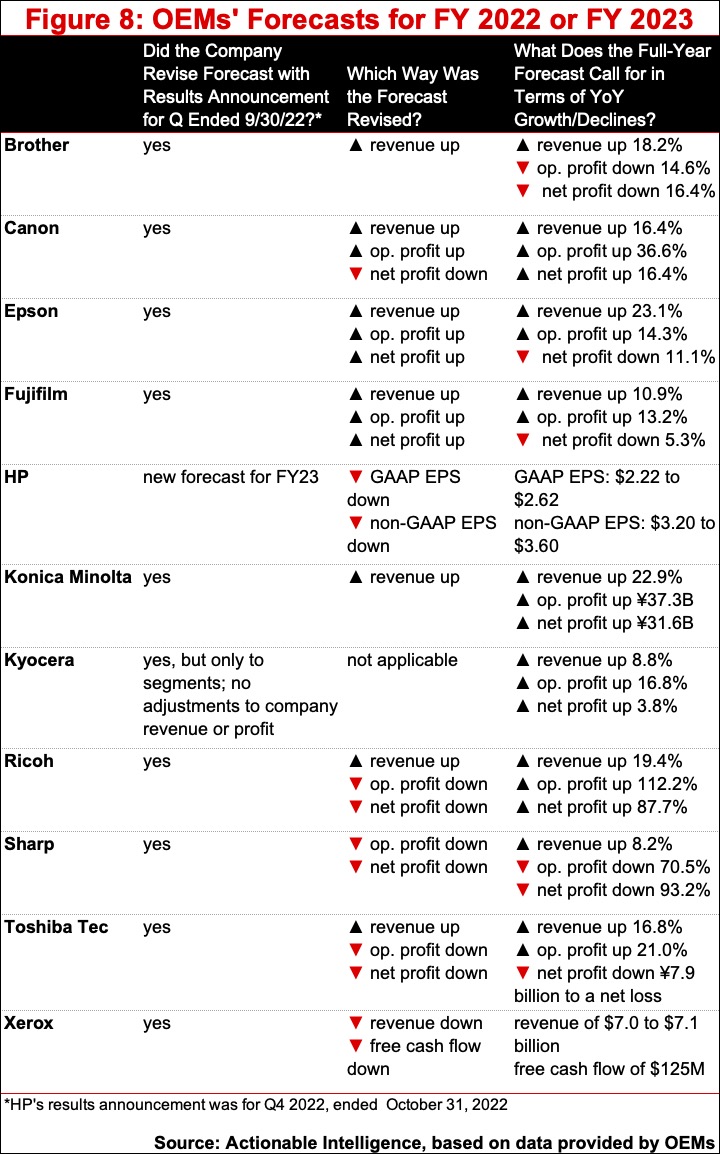