You are at:Home»Industry Insights»U.S. Threatens to Tariff All Chinese Imports 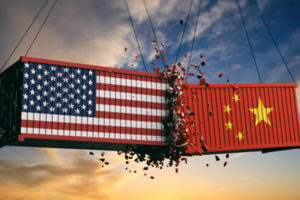 This week marks the ten-year anniversary of Lehman Brothers filing for bankruptcy. It was a pivotal moment when the world saw the growing subprime mortgage crisis spark the largest bankruptcy filing in U.S. history. September 15, 2018, the date Lehman filed for Chapter 11, also marked the unofficial beginning of the Great Recession.

As Nigel Farndale wrote for the Telegraph:

The day Lehman Brothers filed for bankruptcy was the day the worst economic crisis in living memory began in earnest … The financial calendar can be divided into Before Lehman and After Lehman. Before Lehman there was a sense of impending doom that was almost abstract … After Lehman you could smell the fear; hear it in the voice of commentators.

We are wondering if the United States’ burgeoning trade war with China and indeed the rest of the world is providing us with our next Lehman Brothers moment.

Hindsight is 20/20. When you are in the moment, exactly what the long-term impact of events will be is unclear. But throughout the summer of 2018, many economists and big American companies have been signaling a sense of “impending doom” as the trade war between the United States and China ratchets up.

Round After Round of Tariffs

This summer, we reported on the United States imposing $50 billion in tariffs on a wide variety of products, including printer supplies (see “The U.S. and China Trade War Heats Up as Tariffs Are Imposed”). In our last report, we noted that President Trump had asked the United States Trade Representative (USTR) to identify $200 billion more items on which a 10 percent tariff could be imposed (see “Hot Mess Gets Hotter and Messier: U.S. Looks to Impose Still More Tariffs on China”). Those proposed tariffs have since been upped to a possible 25 percent. Public hearings on those tariffs were held from August 20 to 27.

On September 7, U.S. President Donald Trump told reporters on Air Force One that those $200 billion in tariffs “could take place very soon.” Many expect an announcement this Friday, September 14. Moreover, President Trump stated, “I hate to say that, but behind that, there’s another $267 billion ready to go on short notice if I want. That totally changes the equation,” reported a variety of sources including CNN, Politico, and the New York Times.

As reporters noted, an addition $267 billion in tariffs on Chinese imports on top of the tariffs already imposed or in the process of being imposed would mean tariffs being imposed on virtually all Chinese imports. The USTR reports that $505 billion worth of goods were imported from China into the United States in 2017.

It is important to note that President Trump signaled that this was just a possibility and that the ultimate outcome was “going to be up to China.” Some have questioned whether such a thing is even possible. Jose Castaneda, a spokesman for the Information Technology Industry Council, issued a statement saying, “The notion that the president is going to add an extra $267 billion worth of tariffs is grossly irresponsible and possibly illegal.”

But if this is no mere idle threat, that would end all the speculation about what Chinese goods coming into the United States will and won’t be tariffed—everything would be, including, of course, printer hardware and supplies. As with all taxes, there will be loopholes that companies would try to exploit and exemptions to seek, but across-the-board tariffs would make finding those loopholes and getting exemptions more difficult.

On September 10, ABC News reported that China foreign ministry spokesman Geng Shuang responded to the proposed move by vowing, “If the United States insists on imposing another round of tariffs on Chinese products, China will definitely take countermeasures to safeguard its legitimate rights and interests.” But the trade imbalance between the United States and China means China can’t match U.S. tariffs dollar for dollar and would have to fight back in other ways.

Even given the tariff drama, China’s trade surplus with the United States grew to a record $31.05 billion in August, up from $28.09 billion in July, reports Reuters. That said, Reuters noted that China’s export growth in August was 9.8 percent—“the weakest rate since March but only slightly below recent trends.”

Lots of Businesses Will Be Impacted

On September 10, Reuters compiled a list of quotes from various companies issued since President Trump announced the $200 billion in additional tariffs. Companies like Apple, Dell, and Intel have warned that tariffs will mean surging prices for products and components that would negatively affect U.S. business. HP spoke out and indeed provided testimony against the first round of tariffs (see “HP and ISC Speak Out about Proposed Tariffs on Ink and Toner Cartridges Made in China”). However, since then, HP Inc. has been quiet on the topic.

Hewlett Packard Enterprise, however, has been making some noise. On September 7, Nikkei Asian Review reported that various U.S. companies including Hewlett Packard Enterprise spoke up in a letter to U.S. Trade Representative Robert Lighthizer. These firms requested exemptions to some of the $200 billion in tariffs, stating, “If USTR were to impose a 10-25% additional duty on networking products and accessories, it would cause broad, disproportionate economic harm to U.S. interests, including our companies and U.S. workers, our customers, U.S. consumers, and broader U.S. economic and strategic priorities.”

Ninestar, the big Chinese aftermarket supplies manufacturer, has stated that it does not expect to be impacted by the tariffs (see “Ninestar Issues Forecast for H1 2018, Comments on Tariffs, Provides Closer Look at Past Performance”), but, of course, that was earlier this summer, before President Trump threatened to tariff all Chinese imports.

We have been asking around about the U.S. tariffs on Chinese goods over the summer and have been told that printer OEMs are still determining exactly how they will be impacted by the tariffs and see such information as “sensitive” or “company confidential.” And, of course, they are constantly having to reassess as President Trump announces new rounds of tariffs. When the public companies within the industry release quarterly and annual financial results moving forward, we may learn more about how these companies are impacted by tariffs.

The tariffs—both those currently imposed and those proposed—will cause companies that manufacture printer hardware, supplies, and components in China or source them from the country to reevaluate their manufacturing and supply chains, but there are costs and expenses associated with that as well. Across-the-board tariffs will likely mean higher prices for printers and MFPs, the consumables used therein, and the components that go into these products.

What happens next on the tariff front bears watching. Some have been warning that President Trump’s tariffs could lead to a U.S. or even global recession (see Bloomberg, Stanford.edu, MarketWatch, and Forbes articles for just a few of many examples). Others have been saying a recession is unlikely (see CNBC and Weekly Standard posts). However, we have to note it was a lot easier to find articles arguing for the former position than the latter.

While we think there will be more losers than winners within the imaging industry, President Trump’s tariffs on Chinese goods could benefit U.S. remanufacturers like Clover and LMI Solutions that manufacture products in Mexico rather than China—at least in the short term. A brief, mild economic downturn might even help these companies at first as companies look to cut costs by turning to remanufactured cartridges and the tariffs lessen the price differential between remanufactured cartridges and new-build cartridges imported from China (even though new-builds will always be less expensive).

Ultimately, however, we think a full-blown trade war is going to hurt the entire imaging industry, especially if the global economy spirals toward recession. Many in the printer and supplies industry have never seen their revenue and profits climb back to pre-Great Recession levels, and that’s a decade after Lehman’s collapse.