Recently, we found an interesting video on YouTube that HP, Inc. released back in February of this year. It claims that office-equipment dealers can save significant money by using the OEM’s toner cartridges, which allows them to reduce the number of service calls and provides additional benefits. 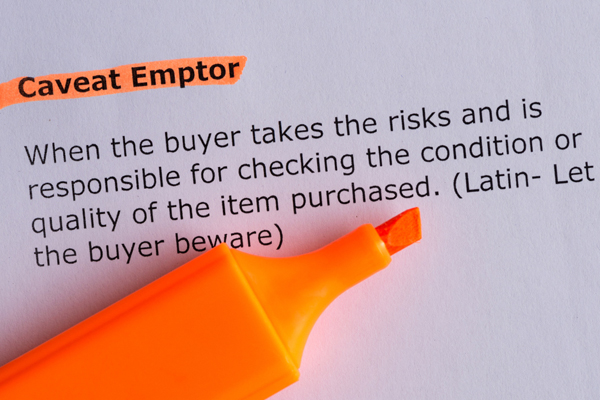 In the YouTube video, Tom Senecal, CEO of Laser Resources, says that his firm saved upwards of $80,000 by reducing service calls after switching to HP consumables from remanufactured products. For years, the company used remanufactured toner cartridges as well as refurbished fusers and other long-life consumables (LLCs) in the machines it managed. According to the video, the Grand Rapids, MI-based company, which Mr. Senecal started as a reman vendor in 1991, saw an 85 percent reduction in defective cartridges by switching to OEM consumables. Laser Resources was able to improve its first-time fix rate by 14 percent and cut its service calls by 34 percent.

Mr. Senecal said that his firm began using HP supplies exclusively in LaserJet devices as a result of HP’s new QuickSilver program. According to a case study released by HP last year, Laser Resources was given discounts on over 170 OEM SKUs, including toner cartridges and LLCs. In the video, Mr. Senecal reports that QuickSilver allows him to match the pricing competitors offer for managed print services (MPS) featuring remanufactured cartridges and refurbished LLCs. He concludes the case study by saying his firm has “evolved from being the dirty garage toner cartridge remanufacturing company into a whole new, successful business model.”

It appears that Laser Resources is not the only HP channel partner extolling the benefits QuickSilver offers. In an article posted on The Imaging Channel website, representatives for Stargel Office Solutions echoed many of Mr. Senecal’s sentiments. According to the July 29, 2019 post, by switching to HP toner cartridges and LLCs, the Houston,TX-based MPS provider was able to cut its service calls by 30 percent and save $50,000 in related costs. A Stargel representative said that through the QuickSilver program, the HP consumables are “competitively priced.” Citing issues like leaking toner and inaccurate color rendering, Slade Stargel, the firm’s president, claimed, “Everybody at some point has experienced problems with compatible toner.” He added that this means his company doesn’t have to do much to convince customers that original HP supplies are better than compatibles.

The savings recouped by Laser Resources and Stargel Office Solutions are impressive. The success of any MPS business is determined largely by the consumables. By delivering access to high-performance OEM supplies at reman prices, QuickSilver would appear to be a game changer. In addition to offering improved cartridge performance, it seems that using OEM consumables also reduces the overall wear-and-tear on a device, which is suggested in the lower break-fix intervention rates.

In addition to releasing case studies, HP commissioned third-party studies to examine how its supplies stack up against non-HP consumables in terms of machine wear-and-tear. In January 2019, Market Strategies International, now known as Escalent, released the results of one such study. In 2018, the firm conducted 20-minute phone interviews with 220 HP ServiceOne Partner printer technicians in North America. The technicians who participated had at least 6 months of experience servicing HP monochrome and color LaserJet printers with both HP and non-HP toner cartridges installed within the past year.

According to the SpencerLab report, using non-OEM inks can cause big problems. The firm reported that 31 percent of printers employed while doing its testing were damaged by non-OEM inks, while the OEM ink cartridges did not cause any printer damage. SpencerLab said that certain non-OEM ink brands caused “catastrophic damage,” which could not be resolved by cleaning cycles and would require the customer to replace the printer. In particular, the inks ruined the printheads (see picture below). The SpencerLab report indicated that the OEM cartridges, in addition to not causing any damage to the test printers, delivered significantly higher page yields. On average, the study found that HP ink cartridges deliver 111 percent more pages than the non-OEM cartridges tested. 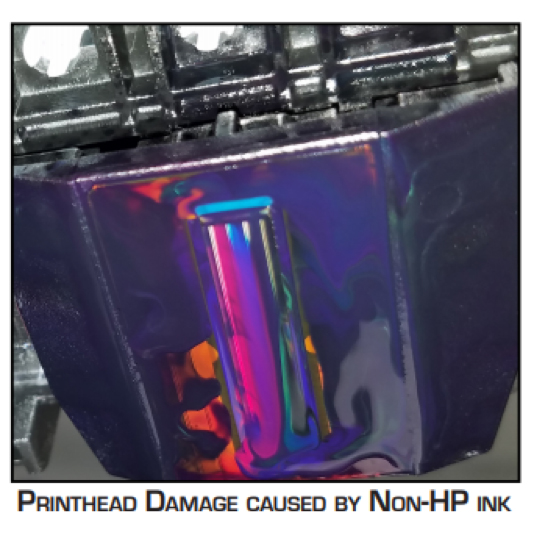 What Do End Users Say?

In an attempt to corroborate the dealers’ claims and SpencerLab’s test results, we looked for other studies comparing problems caused by OEM cartridges to those caused by compatibles and remans. We were particularly interested in determining if non-OEM supplies put more stress on a machine and caused more wear-and-tear than OEM products. Alas, our mission was not an easy one. HP dealers seem to be the only ones currently promoting OEM cartridges as less damaging to hardware than third-party products, at least at the moment.

With no other test results, we turned to reviews on Amazon to see if end users were having problems with third-party supplies that impacted the life or performance of their hardware. We didn’t have to look far. The day we did our research, one of the top-selling third-party toner SKUs was a two-pack of Linkyo compatible Brother TN-660 cartridges (ASINB00S0BENC2), which sold for $20.95 compared to $53.99 for the high-yield version of the OEM product. While most of the reviews for Linkyo compatibles were positive, 16 percent ranked the product with three stars or less. Of the 114 reviews that gave the product a one-star rating, most complained that the Linkyo compatibles did not work at all or the print quality was unacceptable. Many also complained that the cartridges seem to be damaging their printers by leaking. In a couple of cases, the reviewers said the Linkyo compatibles completely ruined their machines.

More than one reviewer said the Linkyo compatibles did not fit properly in their machines and one review claimed the lid of the printer would not close when the non-OEM cartridge was installed. We also saw a number of reviews that said the wrong SKU was in the box so the cartridges wouldn’t work. Several reviewers said that the gears in their printers made a grinding noise when the compatible cartridges were inserted, but the sound went away when the compatible cartridges were removed and replaced with OEM cartridges. One review warned “Printer killer, avoid!” The reviewer detailed how the cartridge ground down the machine’s gears before getting stuck and “rendering a perfectly good printer inoperable.”

We sampled reviews from another TN-660 compatible cartridge vendor, E-Z Ink. The company also markets a TN-660 two-pack, which sells for $20.89 (ASIN B00NY6QUP6)  Again, most of the reviews were good, but 16 percent ranked the product with three stars or less. While none of the reviews indicated that the E-Z Ink compatibles ruined the reviewer’s device, many said the cartridges leaked or delivered poor print quality. For example, one review said that after using the cartridge for a month it began to leak “creating a mess inside the printer” and degrading the print quality.

We also looked at reviews of the OEM Brother TN-660 to see if there were any issues similar to those we read about for the third-party compatibles. We did find a few.

When we checked, the Brother TN-660 was the number-one selling product in the Laser Printer Drums & Toner category on Amazon. Brother was selling one TN-660 OEM cartridge for $53.99 (ASIN B00LJO8EQS), which is a discount of about 21 percent off the $68.49 price listed for the SKU on the Brother USA site. While the majority of reviewers rated the product favorably, 11 percent gave it three or less stars. Interestingly, while several reviewers complained that the cartridges leaked (see example here), most blamed the problem on the seller not the OEM. One reviewer complained that the printer was ruined but wrote, “I highly doubt this the original Brother. I think it was refilled selling as new.” Many also complained about lower-than-expected page yields and the high price of an OEM product.

Non-OEM Ink Can be Highly Problematic

By studying Amazon reviews, we learned that consumers have more consequential problems with cheap ink tanks than they do with cheap toner cartridges. Ink seems to cause more mess and leak easier. We also noted that certain non-OEM inks have a tendency to damage a machine’s print head, which is consistent with the findings in the SpencerLab testing.

The best-selling third-party ink SKU on Amazon when we checked was a package of 15 new E-Z Ink tanks compatible with Canon PGI-250XL high-yield black tank the CLI-251XL high-yield cyan, magenta, yellow, and black tanks. When we checked, the SKU, which contains three sets of the five cartridges, was selling for $15.95 (ASIN B073BMRPCP). As was the case with the other products, most of the E-Z Ink tank reviews we read were positive. However, 12 percent of the reviewers rated the 15-pack with three stars or less. Out of this group, reviewers complained that the tanks leaked, requiring major clean-up.

Unlike the reviews we read about third-party toner cartridges damaging printers, which seemed to be limited in number, we found lots of reviews claiming non-OEM ink tanks caused problems. Some 15 reviewers reported that the E-Z Ink tanks contained inks that fouled the print heads in their printers. In some cases, the heads could be salvaged. In other cases, such as the review titled “Broke my printer head,” users claimed the heads were ruined by the inks.

Initially, we were surprised to see so many inkjet devices damaged by non-OEM supplies, but after some investigation, we discovered it was a fairly common occurrence. E-Z Ink compatibles for Canon printers were not the only ink cartridges that damaged printers. Reviews of IKONG HP 932XL compatibles (ASIN B01ANAZRX6), MyToner reman Epson 252 tanks (ASIN B07GR8RXMQ), and Office World Brother LC203 compatibles (ASIN B01HOB3RFW) indicated that non-OEM products ruined the buyers’ machines.

When it comes to consumables products, consumers have a plethora of choices: OEM versus third-party, reman versus compatible, high-yield versus low-yield, and more. Each SKU has a unique value proposition in terms of its price-performance ratio. Pay a little more and get better performance or trade some performance to save a little money. In the end, it is up to each individual consumer to determine what products are right for themselves.

With that said, however, it is abundantly clear that in today’s supplies market, there’s a lot of junk out there that could damage your hardware. Regardless if cartridges are purchased online or procured directly from a manufacturer, consumers and end-users must be vigilant to ensure that they are getting the value proposition they paid for. Nowhere is the phrase “let the buyer beware” more apt than when shopping for ink and toner cartridges.