On June 24, HP released its 2019 Sustainable Impact Report. The report comes as the world faces some unprecedented challenges in 2020: the coronavirus (COVID-19) and its impact on people, communities, the environment, schools, businesses, and the global economy; Black Lives Matter protests aimed at addressing police brutality and systemic racism; and growing concerns about sustainability amid global warming, an ever-growing mound of waste ending up in landfills and oceans, and environmental disasters such as fires in Australia, the Amazon rainforest, and the Arctic. HP’s report charts “the progress the company is making to drive greater diversity and inclusion, reduce its environmental footprint, and strengthen communities around the world.” Its main message? HP is one of the helpers and takes being a good corporate citizen seriously. 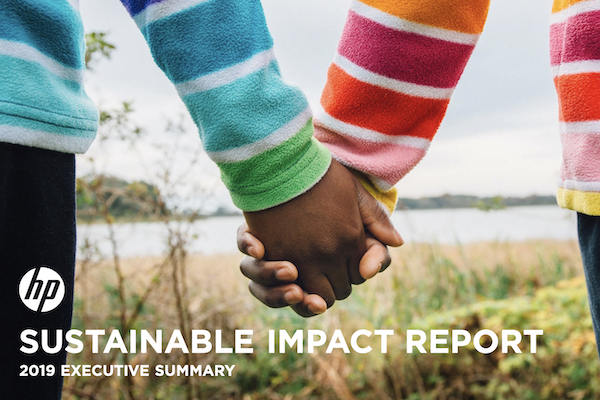 As Enrique Lores, HP president and CEO, put it in the company’s press release, “The HP culture has long been built on the belief that how we do things is just as important as what we do. Recent events have laid bare the systemic racism and deep inequalities that remain a stain on society, and it’s imperative for all companies to act with urgency on all fronts.”

Mr. Lores continued, “It’s especially important for companies to hold themselves accountable and publicly report their progress. This year’s data shows that HP is making significant strides forward in many areas, while also revealing where we must do better. For example, the number of African American employees is below where it needs to be, and we are taking actions to improve. While we have a lot of hard work ahead, our values-driven culture that unites our teams and our partners gives me confidence in our ability to accelerate our progress and foster a more sustainable, equitable, and just society.”

Given the widespread Black Lives Matter protests, it is not surprising that HP was eager to highlight its support of diversity and inclusion. The firm stated, “HP is driving a culture of diversity and inclusion at all levels of the company and remains committed to fighting racial inequality in all forms.” HP says its board of directors is “the most diverse of any U.S. technology company, comprised of 42 percent women and 58 percent minorities.” The firm also stepped up its hiring of “underrepresented groups, including women, U.S. ethnicities, veterans, and persons with disabilities.” These groups represented 63 percent of U.S. hires in 2019, up from 57 percent in 2018. Meanwhile, 40 percent of new hires in the U.S. were minorities, up from 32 percent in 2018, and 40 percent of the firm’s global hires in 2019 were women.

HP highlighted its Global Supplier Diversity program through which its spent $374 million with small and diverse suppliers including minority- and women-owned businesses. The overall impact in terms of goods and services produced by these suppliers was $698 million. The company showcased other efforts as well, including its support for the HBCU (Historically Black Colleges and Universities) Challenge, the CEO Action for Diversity and Inclusion, its partnership with Girl Rising  (a global nonprofit dedicated to eradicating poverty by providing education to women and girls), and a $500,000 pledge from the HP Foundation to “to social justice organizations to confront and combat systemic racism and inequality in society.”

And, of course, given that this was a sustainability report that HP was announcing, there was a huge focus on the firm’s environmental initiatives and goals. For example, HP’s press release and sustainability report discussed HP’s work to protect and restore global forests, such as its decision in 2019 to partner with the World Wildlife Fund to restore, protect, and responsibly managed 200,000 acres of forest and its launch of the HP Sustainable Forest Collaborative (see “HP Partners with World Wildlife Federation to Protect Forests”). HP noted that the Arbor Day Foundation, Chenming Paper, Domtar, and New Leaf Paper have joined the collaborative to accelerate efforts on forest restoration.

However, on the topic of sustainability, HP devoted the most ink to a new goal: to eliminate 75 percent of single-use plastic packaging by 2025. Why is this important? HP said 300 million metric tons of plastic is produced each year worldwide, and half of this is for single use and 91 percent is not recycled at all. The firm noted that as a result of COVID-19 demand has increased for packaging. To help meet its goal, HP is eliminating unnecessary plastics and wherever possible. For example, in 2019, HP did away with plastic ties on power cords and plastic document bags. The company is also transitioning from plastic foam packaging cushions to those made with 100 percent recycled, molded pulp for HP’s notebooks, desktops, and displays. In its Printing business, HP reduced plastic foam by 40 percent. The firm added that it eliminated over 95 metric tons of the material in 2019 by redesigning the packaging of a printer model: the HP Tango Terra, HP’s first printer with zero plastic packaging (see “HP Claims New Tango Terra Is World’s Most Sustainable Home Printing System”). 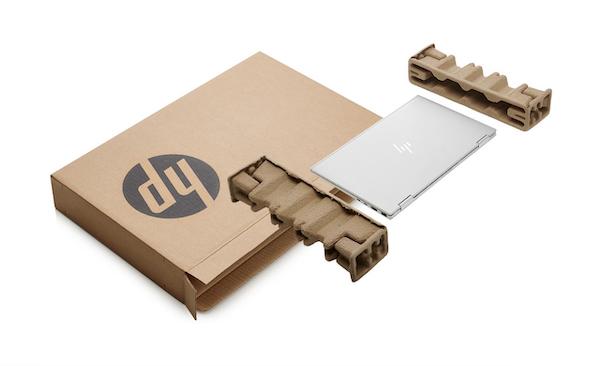 HP has been working on a campaign to reduce ocean-bound plastics for a few years now. For example, in 2017, HP announced that, through a collaboration with Thread International and the First Mile Coalition, it was making HP ink cartridges with plastic from bottles recycled in Haiti (see “HP Announces Sustainability Report and Program in Haiti to Recycle Bottles into Ink Cartridges”). In 2018, HP joined the NextWave Plastics consortium, whose aim is to reuse plastic that would otherwise end up in the world’s oceans (see “HP Joins NextWave Plastics Consortium Aimed at Keeping Plastic Out of Oceans”). Earlier this year, HP became the first company to get UL’s validation on resins containing ocean-bound plastics (see “HP Is First to Receive UL’s Recycled Content Validation for Ocean-Bound Plastics”). The firm’s new report highlights that as of its 2019 sustainability report HP has sourced 1.7 million pounds—more than 60 million bottles—of ocean-bound plastic. 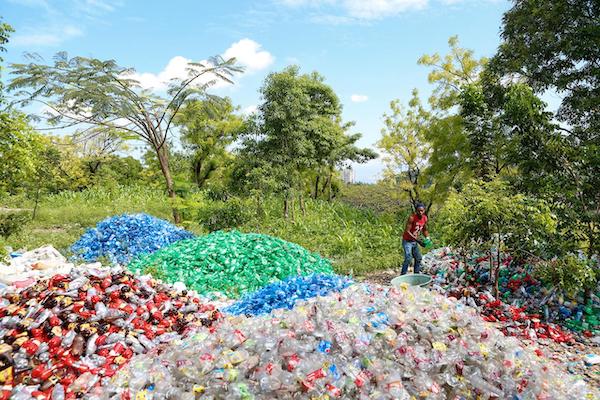 While cartridge-recycling efforts were not highlighted in HP’s press release, they were noted in the sustainability report itself. HP has been using recycled plastic in its cartridges since 2008, when it announced its closed-loop inkjet cartridge recycling program. In 2019, HP recycled 14,300 metric tons of HP toner cartridges and 1,400 metric tons of HP ink cartridges. While the ink cartridge figure was flat with the year prior, toner cartridge recycling shrank by 1,000 tons from the year prior—something likely attributable mainly to declines in cartridge sales. As of its 2019 report, HP stated that more than 82 percent of HP ink cartridges contain 45 to 70 percent recycled content, while 100 percent of its toner cartridges contain 5 to 45 percent post-consumer or post-industrial recycled content. 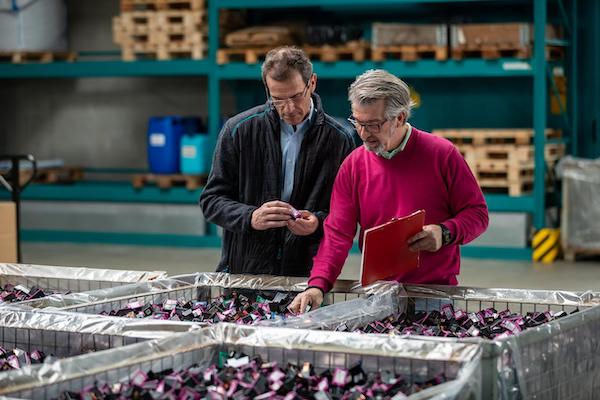 HP also highlighted the environmental benefits of the Instant Ink program in its sustainability report. The printer maker said, “An LCA [ life-cycle assessment] we conducted determined that Instant Ink on average decreases the carbon footprint of ink purchase and distribution by 73 percent, while reducing energy use by 69 percent and lowering water use by 70 percent, compared with cartridge purchase and recycling through traditional retail channels. Key factors include reduced materials use (higher capacity cartridges, less packaging, and higher recycling rates) and simplified distribution (bulk shipping and avoided trips to the store).”

In its Q2 2020 financial report (see “HP Printing Business Battered by COVID-19 in Q2 2020”), HP said that as of the end of April 2020 the firm had over 7 million Instant Ink subscribers. The firm has grown Instant Ink steadily for years, but the program received a boost from COVID-19, which sparked increased home printing and made Instant Ink’s promise of replacement ink cartridges delivered to your door before the old cartridges run out of ink that much more attractive. Now that HP has done an LCA on the program, we expect to see HP increasingly focus on the environmental advantages of Instant Ink in its messaging, in addition to the program’s convenience and cost savings. That message may prove especially attractive to Millennials and European consumers who tends to prioritize sustainability when making purchasing decisions.

HP discussed its efforts to “build resilient communities everywhere,” largely through its support of education. The firm said that since 2015 it “has reached more than 28 million students and adult learners, driving progress toward enabling better learning outcomes for 100 million people by 2025.” The company highlighted the HP Foundation’s HP LIFE program, which provides entrepreneurs, adult learners ,and students with free online, offline, and in-person training on core business and IT skills.

COVID-19 drove new challenges in education. HP notes that 6.3 million PCs were shipped to schools worldwide in 2019, but, in 2020, many schools were closed due to COVID-19. While HP has announced a variety of actions to combat the virus, including 3D printing more than 2.3 million parts such as face shields, masks, nasal swabs, and more for hospitals, HP also focused on helping students. The firm states, “The shift to mobile and online learning has been a challenge for many students who lack access to devices or a reliable Internet connection to learn from home. In response, HP recently launched HP Turn to Learn, a program that is delivering educational content primarily focused on STEM and environmental topics to Title I school districts across the U.S. in partnership with TIME for Kids, NASA and Britannica.” HP and HP Foundation have committed to donating an estimated $8 million in products and grants to support blended learning and local communities. HP has also launched Print, Play & Learn online resource, which offers free printable content, curated weekly through collaboration with such education leaders as Education.com, TIME for Kids, Canva, Crayola, and KiwiCo (see “HP Offers Free Learning Printables for Homebound Parents and Children”).

HP noted that it and more than 155 business have signed the ‘Recover Better’ statement, urging governments worldwide to align their COVID-19 economic aid and recovery efforts with the latest climate science, because planetary health affects human health.

In the old days, some complained that printer industry companies’ sustainability efforts were just aimed at “greenwashing” a dirty business. If that was ever true—and we’re not saying it was—that is certainly no longer the case. Sustainability reports like HP’s demonstrate that corporations’ environmental initiatives have evolved over time to become comprehensive, inventive, and effective. HP’s report also illustrates that it takes being a good corporate citizen seriously. And its message and its work in this area is gaining recognition. Newsweek just gave HP the number-one position on its list of America’s Most Responsible Companies for 2020.

We found the main message in HP’s new video below entitled “Easy Doesn’t Do It: HP Sustainable Impact” to be particularly compelling: “Choosing easy over right and saying yes to what’s comfortable or convenient is what got us here in the first place. If history has taught us anything it is that making claims is one thing. Making change is another.”

Doing good isn’t easy, but HP is betting in the long run it pays off. HP said its sustainable impact efforts helped drive more than $1.6 billion in sales wins in 2019, up 69 percent year-over-year. It appears that customers are increasingly voting with their pocketbooks and signaling they value sustainability.