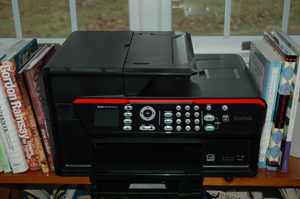 No glamour shots here. This is the Office HERO 6.1 in my crowded home office, where it must currently reside in the section of shelving known as “cookbook hell.” Home-office factoid: Did you know that the original Joy of Cooking includes a section on how to cook unusual animals including bear, whale, and the peccary, also known as “skunk pig”? Sort of makes following the set-up instructions for a new printer more appealing.

Actionable Intelligence has published two articles about the Kodak Office HERO 6.1 and its siblings (see “Kodak Debuts New HERO Inkjet All-in-One Line” and “Will Kodak’s New HERO Line Prove the Hero Its Consumer Inkjet Business Needs?”). This latest article is inspired by the fact that Kodak recently sent me an Office HERO 6.1, so I decided to write Actionable Intelligence’s first printer review.

Why might the Office HERO 6.1 and I be a good fit for a printer review? Well, for one, I am almost Kodak’s ideal customer. The Office HERO 6.1 is the successor to the ESP Office 6150, Kodak’s first inkjet all-in-one specifically designed for the home office. My test environment is a home with two offices: one a Mac-based office that I work in most of the week and the other a PC-based home office that is used about once a week. With two offices on different floors sharing one printer, a WiFi device such as the HERO 6.1 is a must. Theoretically, with two home offices plus occasional home-printing needs, my home should be one of the “high burn,” or high print-volume environments, Kodak is chasing. This is where I fall short of Kodak’s ideal. (For a discussion of this home office’s actual print volumes, see “Confessions of a Former Tree Killer.”)

Kodak’s inkjet line is targeted at those who print photos, even with the home-office-oriented HERO 6.1. As part of the homes-with-young-children demographic, I capture and prints lots of photos, but almost never print them on a desktop inkjet device due to the hassle and expense. But a product like the Office HERO 6.1, which has features that are designed to replicate the “ you press the button, we do the rest” ease-of-use of Kodak’s first camera and low photo-printing costs, might, in theory, encourage me to change my online photo-printing ways.

I was also interested in reviewing the Office HERO 6.1 to see how Kodak Email Print worked and whether it would prove easy and intuitive to use when printing the occasional photo or document when away from the home office.

Finally, I thought my home office might be a good representative test environment because I am technologically lazy. I like my Mac because it works and I don’t have to think about it too much. I get cranky when installing software or hardware and there is any sort of hiccup. If I have to call tech support, I am usually somewhere between weeping and putting the offending piece of technology on the curb of my road with a sad, taped sign reading “free,” thereby signaling to the world that technology has defeated me. Kodak talked a lot about ease of use with the new HERO line, and I figured, “Game on.” Let’s see if one of the new HERO inkjets is easy for me to use.

So here goes Actionable Intelligence’s inaugural printer review. Readers should note that this represents one cranky home-officer user’s subjective experiences in an actual and hence not ideal environment. Your experiences may vary depending on factors such as the output you choose to print/copy, your choice of connectivity, and numerous other factors. The review is presented in two parts. Here we will cover initial impressions and setup. Functionality and features are presented in part two. 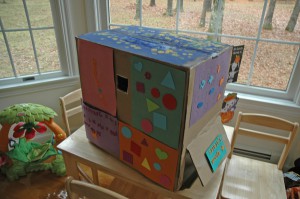 I found a temporary reuse for the Office HERO 6.1’s outer ship-with box as a home for a stuffed horse named Spirit, but, if the fates allow, this behemoth of a box will get recycled before the holidays.

The packaging for the Kodak Office HERO 6.1 did not seem very eco-friendly, with one outer shipping box containing another large box filled with lots of Styrofoam inserts, the printer, and yet more boxes containing cartridges and the print head, software, power cords, etc. But everything inside was well-organized, labeled when necessary, and easy to find.

The Office HERO 6.1 exterior design is black with red accents. Some reviewers have deemed the Office HERO 6.1 “hardly stylish” or “top heavy,” but I actually liked the sturdy and bulky look of the duplexing ADF, having had the non-duplexing ADF of a previous inkjet all-in-one permanently ripped off by an angry toddler who didn’t like hearing “mommy just has to check email” for the umpteenth time. I also liked the setup of the 200-sheet input and output paper trays (the latter is stacked on top of the former). With our current $99 inkjet all-in-one, bought to replace the one with the broken ADF, there is a simple open 100-sheet tray for paper, on top of which output is also unceremoniously dumped. This means most of the paper is grabbed by the aforementioned impatient child for drawing paper, leading to frequent paper jams and paper-out conditions. In addition to the child-thwarting paper-tray design, I liked that the Office HERO 6.1’s input tray hold 200 sheets of office paper, as this means fewer interventions.

Kodak provided printed quick-start instructions and an online installation demo. There is also a detailed user guide, which can be saved as a PDF, available on Kodak’s website. Instructions on installing the print head in the quick-start guide could have been better; the online instructions were more helpful in getting the print head to snap into place properly. Installing cartridges, setting up paper trays, and the one-button automatic print-head calibration cycle were all easy.

I wanted to connect to the Office HERO 6.1 wirelessly because I have a very tiny antique desk that barely fits my MacBook Pro, monitor, and mouse. Note that for those wishing to connect via USB, a USB cord must be purchased separately, a perennial complaint among printer buyers. 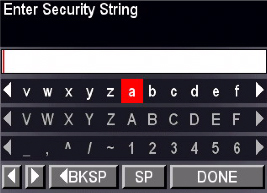 The display that appears to enter your router’s passcode

I had to establish a manual WiFi connection because we have an older router rather than one that support WPS (WiFi Protected Setup). The LCD automatically displayed our network, along with those of a couple of neighbors. I liked the passcode interface that appeared on the LCD (see photo) for entering my router password because it had three tiers (lowercase, caps, and then numbers and symbols), all quickly accessed via the circular navigation and OK button on the control panel. Entering long strings of digits can be pretty unpleasant, but Kodak has done its best to make this one-time part of the setup easier than I have seen on some other devices. The handshake to the router took about 30 seconds.

When installing the software from CD, the installer automatically checked for updates to drivers. Another nice feature of the software installation is that Kodak asked about privacy preferences and the amount of communication with Kodak desired. All went well with this initial part of the setup. It took about 20 minutes with some interruptions.

Next, I decided to set up cloud printing. That’s when I first encountered some trouble. Setting up cloud printing involves a firmware update. I received several error messages while trying to open Kodak AiO Home Center and update firmware. Then, during the actual firmware update, the Office HERO 6.1 started beeping every second or two and displaying a message about a USB device not being connected. “What USB device?” I wondered? There was no USB device connected. The beeping continued until I turned off both my printer and my Mac and restarted.

Happily, whatever went wrong and my shutting things down did not kill either the firmware update, which was successfully downloaded, or Kodak AiO Home Center software. However, after the reboot, the Kodak AiO Home Center announced that it had detected a firewall and that some AIO printer functionality may be blocked. I felt this warning didn’t really leave me with much of a choice: get personal info hacked or access some printer functions. I decided not to tinker with my security settings, to ignore this warning, and soldier on.

I went to the Tools tab on Home Center software and chose “Cloud Printing Setup.” I then signed up for Google Cloud Print and signed up for and received a unique printer email address to use Kodak Email Print. Phew. Weeping and tech support call averted.

It is also worth pointing out that whenever you use the Kodak support site, you are advised to print the page before proceeding with the instructions below. Very clever, Kodak. Way to get those end users printing from day one.

For more on the actual performance of the Office HERO 6.1, see part 2.