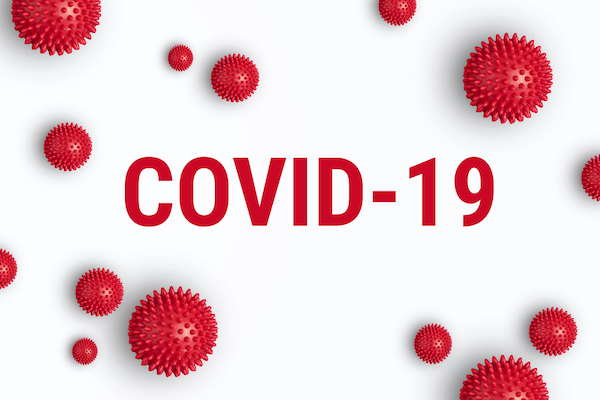 In late July and throughout the month of August, printer OEMs announced financial results for the three-month period ended June 30, 2020. When we summarized results for the quarter ended in March 30, 2020, we said that it was one of the most downbeat earnings seasons Actionable Intelligence has ever witnessed (see “The Big Picture: OEM Financials for the Quarter Ended in March 2020”). But the quarter ended in June was far, far worse for almost every single company.

During the quarter that ended in March, companies were just starting to feel the impact of the coronavirus (COVID-19). With the exception of China, it was business as usual for most companies well into February, and office shutdowns and school closings didn’t start to adversely impact the industry until March. In contrast, during the quarter that ended in June, OEMs experienced three full months of negative effects from COVID-19. The end result was not pretty. With just one exception (Sharp), OEMs reported declines in their printing businesses of anywhere from 15.4 percent to 39.1 percent. With just one exception (Epson), OEMs saw profits decline in their printing segments—eight segments posted steep year-over-year declines and another seven posted operating losses.

For all the Japanese OEMs, except Canon, the period from April 1 through the end of June was the first quarter of the fiscal year ending March 31, 2021. For Canon, U.S.-based Xerox, and China-based Ninestar, this period was the second quarter of fiscal 2020. HP is on a different financial calendar than all the other OEMs. Its third quarter of fiscal 2020 ran from May 1 through July 31, 2020.

Actionable Intelligence currently covers financial results for the following printer OEMs: Brother, Canon, Epson, Fujifilm, HP, Konica Minolta, Kyocera, Ninestar, OKI, Ricoh, Sharp, Toshiba Tec, and Xerox. With this quarter, we have started including Ninestar in our comparisons. Ninestar operates the Lexmark and Pantum printer businesses. Our detailed coverage of these companies’ financial performance is available only for Actionable Intelligence subscribers, but key takeaways from our coverage are summarized below.

COVID-19 sparked an unexpected increase in demand for small-office/home-office (SOHO) printers, including both inkjets and lasers, and their supplies. While the surge in SOHO sales helped some firms, it was more than offset by plummeting demand for office printers and MFPs and their consumables, which led to significant revenue and profits declines for the industry as a whole. The rapid shift in market demand along with the coronavirus’s impact on manufacturing operations left OEMs scrambling to keep up with the uptick in SOHO hardware and consumables sales. Last quarter, certain makers of SOHO equipment and supplies experienced supply chains disruptions and product shortages in various markets, and that continued in the quarter ended in June. That limited the upside for certain OEMs.

Actionable Intelligence believes the industry hit some historic lows in the quarter ended in June. Many OEMs have indicated their results for the quarter represent the bottom of a trough and that conditions should start to gradually improve in the months ahead. That said, what will happen next remains uncertain, as so much is dependent on the course of an unpredictable virus. Many OEMs have been talking about a new “hybrid” work environment, in which some workers return to offices, but others remain at home. That will result in longer-term shifts in output volumes and the types of devices used to print. While people may print more on SOHO devices, they will be printing less on office equipment, and page volumes are expected to remain depressed. In the U.S., papermakers are bracing for the worst. Domtar, for example, is permanently reducing its uncoated freesheet paper capacity (see “As U.S. Paper Shipments Shrink, Paper Mills Report Financial Downturns and Take Action”). We suspect the situation is the same for the paper industry in other established economies like Europe and Japan where the virus continues to be an issue.

We think the changes caused by COVID-19 will ultimately shake up the industry and could lead to a new wave of consolidation. The quarter ended in June represents a major turning point. That is why we prepared a deep dive into the quarter for subscribers (see “OEMs Look into the Abyss in Industry’s Toughest Quarter Ever”). But some of our key takeaways for each vendor are below.

When we look at the performance of OEMs’ printing businesses, there are a few helpful things to keep in mind. We are classifying all of Ninestar and Xerox as printing businesses. Xerox stopped breaking out its printing segment results separately after its split from Conduent years ago. While Ninestar does break out some of its segment results, it does so only for its first half and full-year reports, its biggest segment by far is Lexmark, and all the other segments are printing segments, so we decided to include the results for the company as a whole in our comparisons. Also, it is important to note that Sharp’s 8K Ecosystem business includes a variety of other products in addition to MFPs, including Sharp’s TV business, so the segment’s results don’t necessarily say much about the MFP and supplies business. Canon’s Imaging Systems segment includes its camera business, which experienced steep declines, and thus the segment’s performance did not reflect the strength of its inkjet business this quarter. We will now have much less insight into OKI’s printing business. Starting this quarter, OKI reorganized its former Mechatronics Systems business, Printers business, and EMS business into a new Components and Platforms Business. 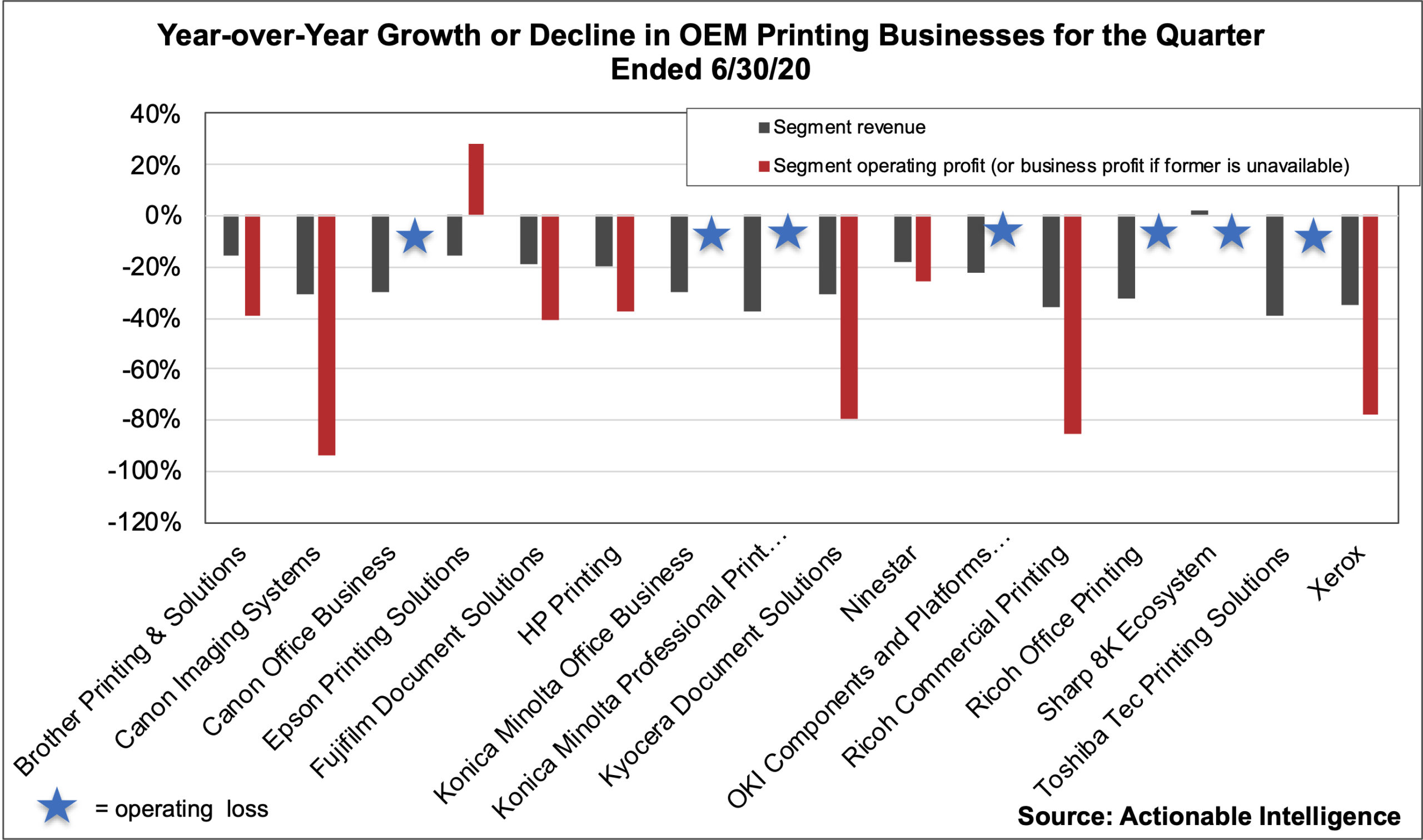 In the quarter ended in June, not a single OEM reported both revenue and profit growth in their printing businesses, and just two companies—Epson and Sharp—were able to report mixed results. Epson actually reported significant profit growth in its Printing Solutions segment, and Sharp saw modest revenue growth in its 8K Ecosystem segment, although we think that was likely due to products other than MFPs. Everybody else saw revenue and profits shrink, and more companies than we have ever seen before posted operating losses in their printing businesses.

Last quarter, only Kyocera and Toshiba Tec issued forecasts for FY 2020. All the other companies we follow either declined to provide a new outlook for the year ahead or pulled previously issued guidance, citing uncertainties surrounding COVID-19. That changed with the quarter issued in June.

Every one of the printer OEMs we follow issued guidance for FY 2020, aside from Konica Minolta and Xerox. Not surprisingly, these were two of the harder-hit companies.

With the exception of Sharp, for whom MFPs represent a relatively small portion of its business, no printer OEM issued guidance indicating they expected to post revenue or profit growth for the company as a whole in 2020. Most are projecting significant full-year revenue declines and some truly astounding declines in profits for the full year. 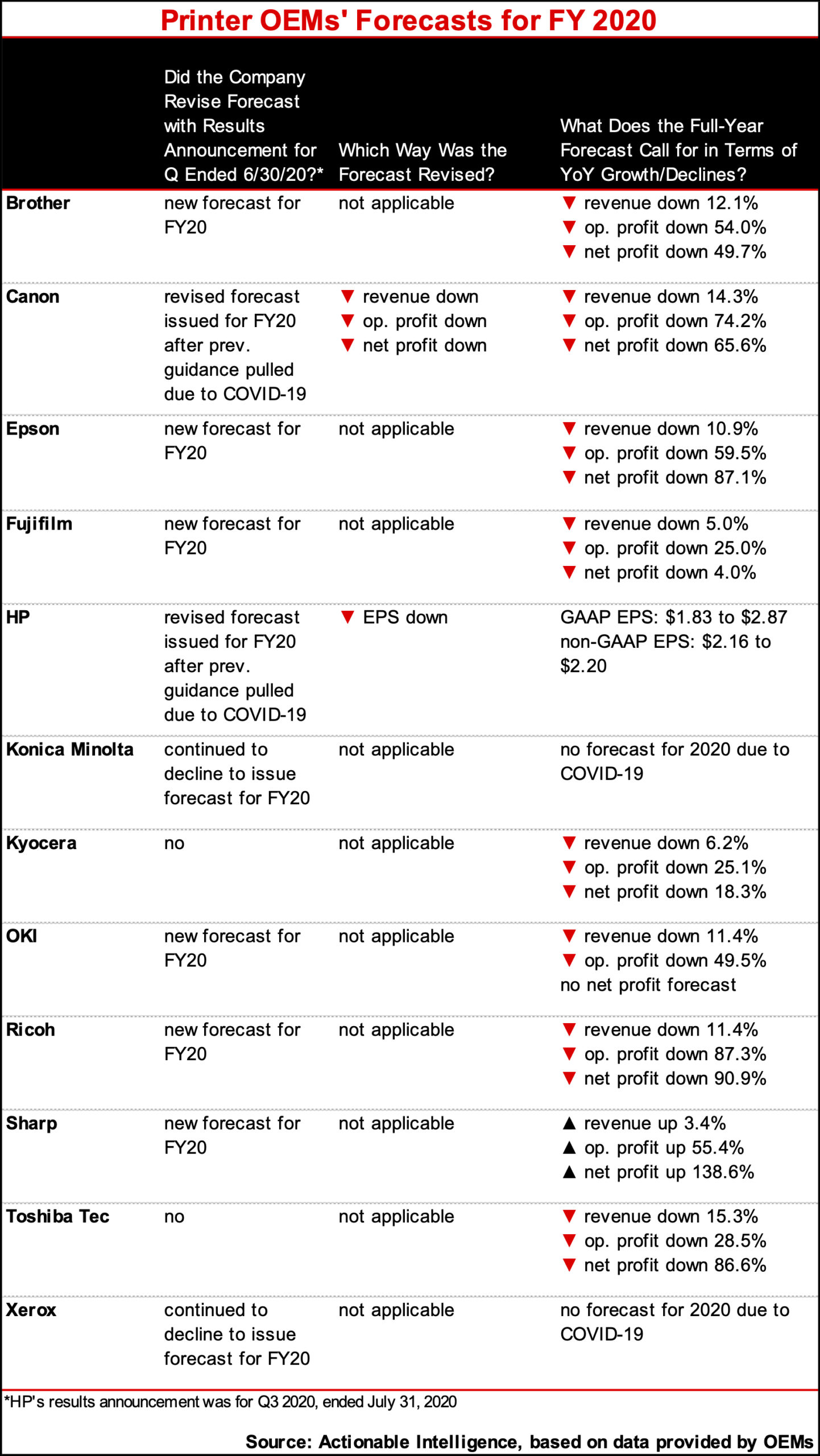