In late July and throughout August, printer OEMs announced financial results for the three-month period ended June 30, 2021. The quarter was the sixth since printer and MFP makers began to feel an impact from the coronavirus (COVID-19) pandemic. Because the quarter one year ago was the worst ever seen for the printer and supplies industry (see “The Big Picture: OEM Financials for the Quarter Ended in June 2020” and “OEMs Look into the Abyss in Industry’s Toughest Quarter Ever”), that meant OEMs had a very easy comparison. As a result, OEMs’ home and office printing divisions posted year-over-year revenue growth of anywhere from 8.6 percent to 43.3 percent and operating profit growth of 4.5 percent to 720.0 percent. And that’s in a shrinking industry in which it has often been said that flat is the new growth. 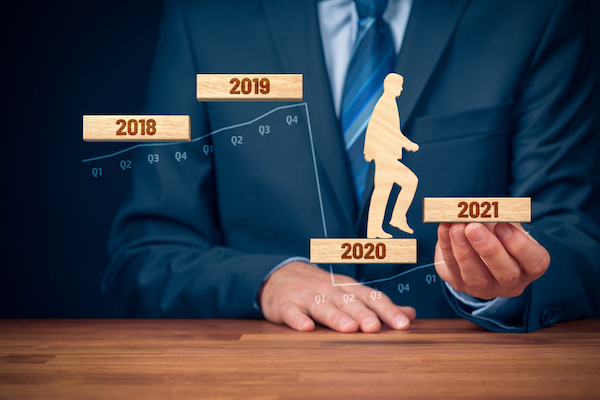 As they have done in the past few quarters, OEMs with strong small-office/home-office (SOHO) printer/MFP portfolios continued to benefit from work-from-home and learn-from-home trends and the shift to hybrid work environments. Moreover, unlike in recent quarters, many OEMs reported a pickup in demand for higher-volume A4 and A3 MFPs and their consumables as more workers return to the office. These trends and the easy comparison enabled OEMs to post some impressive year-over-year numbers, to be sure. But this is hardly a “let the good times roll” moment.

OEMs expressed concern about the emergence of new coronavirus variants, including the Delta variant, causing renewed lockdowns—restrictions have already been put in place in some markets. HP pushed back its planned reopening of its offices (see “HP Delays Office Reopening Due to Delta Variant, Will Require Vaccines”) and made its Reinvent 2021 partner event a virtual conference. In yet another example, Konica Minolta Business Solutions U.S.A. postponed its dealer summit (see “Konica Minolta Postpones Dealer Summit over COVID-19 Concerns”).

Some OEMs had to suspend operations at factories in Southeast Asia, leading to more product shortages. And virtually every single OEM expressed concern about component shortages especially for chips and said increased costs for components, raw materials, and shipping were eating into margins.

One of OEMs’ saving graces amid these challenges is that because certain desktop printers and MFPs are in short supply, there was no need to discount these devices. Because OEMs could command higher prices for the products that were available and many customers opted to purchase higher-priced products, average selling prices (ASPs) rose, and that helped fuel some of the positive trends we saw this quarter. Moreover, because of shortages in prior quarters, there was a lot of pent-up demand among channel partners, so partners were eager to gobble up whatever inventory OEMs had available.

Comparison to Before the Pandemic

With almost every single OEM reporting strong year-over-year growth this quarter, one thing we have been eager to look at is whether that growth makes up for the big declines posted one year ago. Thus, in our financial reporting this quarter we did lots of comparisons between the results for the quarter ended in June 2021 to that same quarter of 2019. For more details, see our coverage of each OEM’s report.

Here, however, we take a quick look at which vendors performed well in the quarter ended in June 2021 compared to the quarter ended in June 2019 and which did not. Note that here we are looking only at companywide results, nor printer segment results. Because so many companies resegmented and restructured their businesses in recent quarters, it is not possible to get a 2021 versus 2019 look at certain OEMs’ printer/MFP businesses.

OEMs whose revenue, operating profit, and net profit for the quarter just ended mark a return to or exceed pre-pandemic levels, or what was reported in the same quarter of 2019, include Brother, Epson, Fujifilm, Kyocera, and Sharp.

Certain companies exceeded pre-pandemic levels in some areas but not others. Canon saw Q2 2021 profits soar past Q2 2019 levels, but its net sales for the period were lower than what the firm reported in Q2 2019. HP’s revenue and operating profit for Q3 2021 exceeded those reported for Q3 2019, although the company’s net earnings in the period were lower than in Q3 2019. Konica Minolta had higher operating and net profit in Q1 2021 than it did in Q1 2019, but revenue in the quarter was less than what the firm reported two years ago.

OEMs that posted year-over-year growth this quarter but whose revenue, operating profit, and net profit all remained depressed compared to 2019 levels include Ricoh, Toshiba Tec, and Xerox.

OKI was a bit of an unhappy anomaly in that its Q1 2021 results were worse than those posted one year ago, as well as those posted two years ago.

All this tells you something—OEMs with strong SOHO printer and MFP business have fared far better than those focused mainly on A3 MFPs. Other OEMs with a big A3 focus like Fujifilm, Kyocera, and Sharp saw their businesses rebound to exceed pre-pandemic levels because their businesses are diverse and include other products like healthcare, automotive components, and TVs.

Actionable Intelligence currently covers financial results for the following printer OEMs: Brother, Canon, Epson, Fujifilm, HP, Konica Minolta, Kyocera, Ninestar, OKI, Ricoh, Sharp, Toshiba Tec, and Xerox. For all the Japanese OEMs, except Canon, the period from April 1, 2021, through June 30, 2021, was the first quarter of the fiscal year ending March 31, 2022. For Canon and U.S.-based Xerox, this period was the second quarter of fiscal 2021. HP is on a different financial calendar than all the other OEMs. Its third quarter of fiscal 2021 ran from May 1, 2021, through July 31, 2021.

Strictly in terms of year-over-year growth, every OEM’s printer business was a winner this quarter. Every single home and office hardware and supplies businesses we follow saw revenue growth. All saw improvements in operating profit as well, although in OKI’s and Toshiba Tec’s case this meant their printing business saw smaller losses than in the prior-year period. We actually cannot recall another quarter in recent years in which all OEMs saw across-the-board growth in their printing businesses. But, as discussed above, this is also because the year-ago period was the worst in the industry’s history. 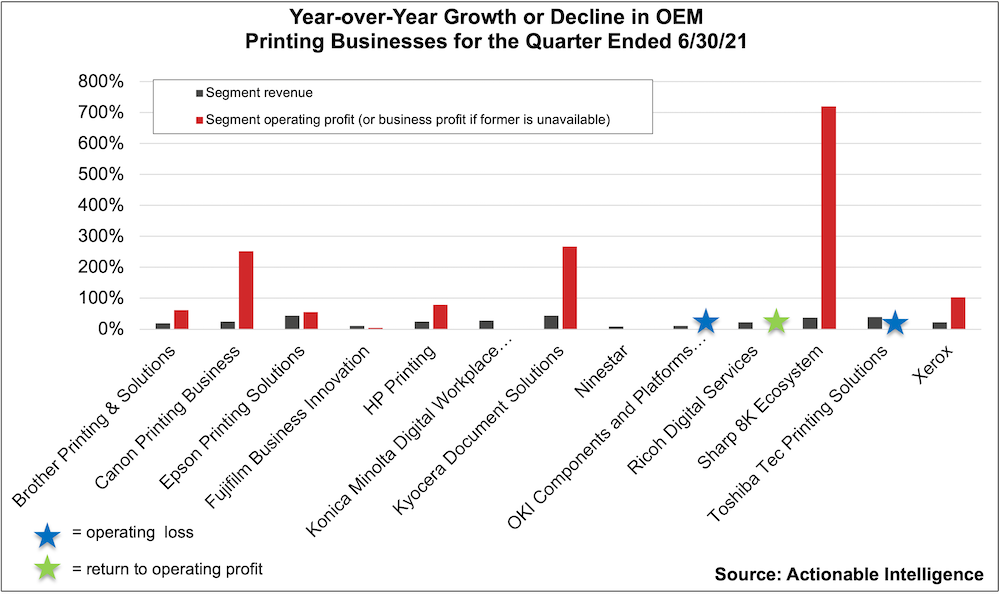 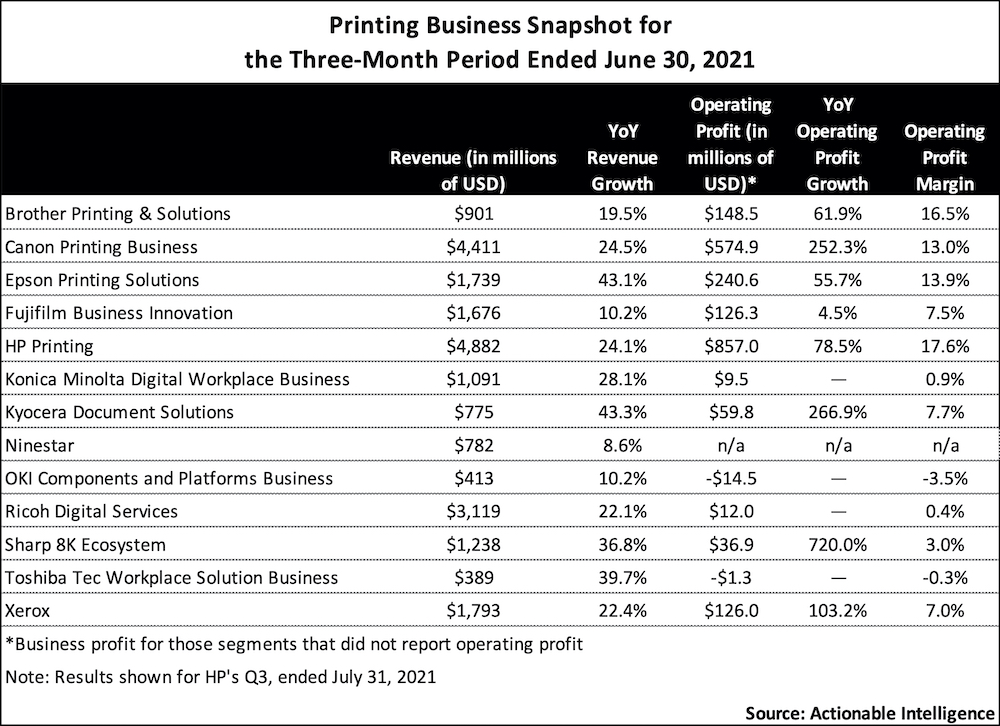 Almost every single OEM started FY 2021 with the expectation that this year would be better than the last. Several OEMs liked what they saw in the quarter ended in June so much that they raised full-year guidance. We saw five OEMs—Brother, Canon, Epson, Fujifilm, and HP—raise their full-year forecast over the guidance provided in the previous quarter.

At this point in time, all OEMs provide outlooks for FY 2021 that shows improvement over the year prior. The one exception is Fujifilm’s net income, which is expected to be lower; however, Fujifilm had recorded net income last year due to certain one-off factors including the impact of it acquiring all of Fuji Xerox. 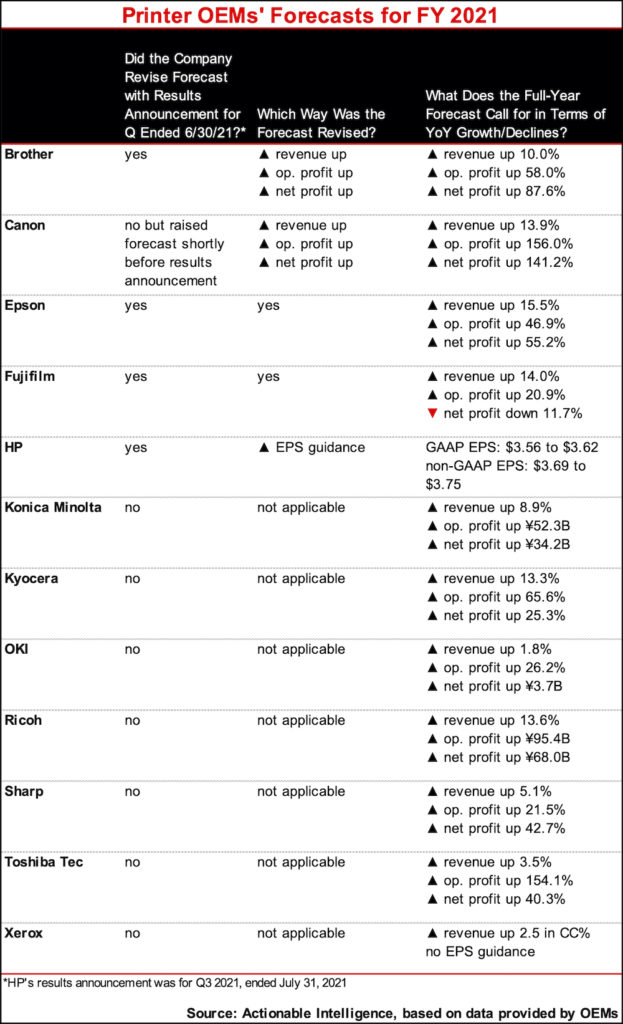