On March 21, China Labor Watch (CLW), an independent, nonprofit watchdog group that follows working conditions in Chinese factories, announced that it has published a new report: “Women Workers in China during the COVID-19 Pandemic.” The 16-page report, which is available on the group’s website, does not focus specifically on workers in the printer or supplies industry. Instead, the report details the ways in which female factory employees in China, particularly rural migrant workers who have fewer resources and opportunities than other groups, face discrimination that is driven by gender and class inequality, and explains how the coronavirus (COVID-19) pandemic has exacerbated these problems, pushing many women out of traditional jobs and into the gig economy. 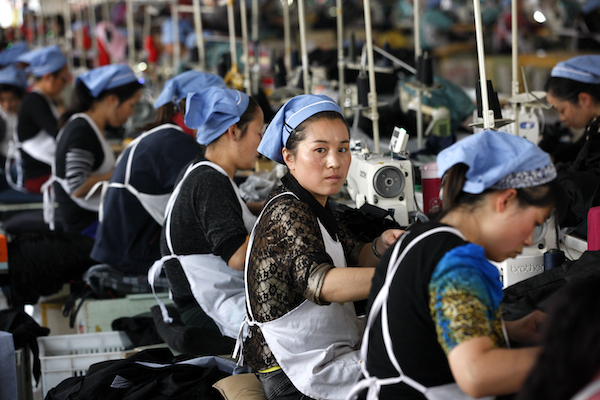 “In recent years, the growing, digital platform-based new economy has absorbed a large proportion of the labor force from manufacturing and other service industries, embedding many women workers in spaces with new forms of discipline as well as new conditions of autonomy,” CLW says in its announcement about the report’s publication. “At the same time, the impacts of the ongoing COVID-19 pandemic have been hitting women workers, throwing many out of traditional jobs and into the gig economy where women can perform care and domestic labor alongside their gig work.”

CLW’s report cites several problems that female factory employees frequently encounter at work, including gender discrimination, segregation, and sexual assault and harassment, and describes how education disparity underlies much of the inequality.

According to the report, women who move from rural areas to work in cities are often limited to low-skill, low-paying jobs with long working hours, and their income and job positions are lower than those of their urban counterparts. The report states that these differences are driven in part by the income gap between rural and urban households, which creates disparities in childhood education. CLW cites a 2016 report published by China Social Welfare Foundation that shows that although 96.1 percent of rural female schoolchildren have received an elementary school education, only 79.3 percent were able to attend secondary schools. Since then, the COVID-19 pandemic has caused female children to drop out at a higher rate as a result of school closings.

The report also finds that gender-based discrimination in job hiring is still prevalent despite China’s Labor Law. CLW explains that according to this law, “women shall enjoy equal rights as men in employment, and sex shall not be used as a pretext for excluding women from employment during recruitment of workers.” However, CLW cites findings from the Human Rights Watch 2018 report that reveal that almost one in five job advertisements in China seeking civil servants stated “male only” or “male preferred.” The report says women are also commonly asked about their marriage status in job interviews.

Also, as COVID-19 forced the closure of many factories and restaurants during the pandemic, many informal, temporary, and casual laborers without contracts lost their jobs. Many of these workers turned to jobs in the gig economy, such as food delivery, which, according to the report is “one of the most visible and popular manual labor jobs created by the platform economy.” The report cites Meituan statistics that show about 7.4 percent of delivery workers are women, and says that women account for 52.22 percent of the gig workers in a 2019 study of gig work in the county-level economy. CLW explains that this type of work has drawbacks for women because “as algorithm optimizes its management of labor, delivery time, and routes based on the data acquired from all the delivery workers, dominantly male, it rules the women to work the same way as men do, ignoring any physiological difference.”

Finally, CLW’s report cites a 2013 study that found 70 percent of female factory workers in China have experienced sexual assault and harassment at work, including annoying whistling, shouts and lewd jokes, annoying touching, and being asked for sex. The report explains that many female factory workers do not have a clear understanding of the term “sexual harassment” and that because there are no independent labor unions or worker representatives present in the factories, workers can only talk to workshop line leaders or administrative departments if they have problems, making it difficult to come forward with a claim of sexual harassment.

CLW concludes its report by highlighting some of the measures that have been taken to address these issues, including a revision of the Women’s Rights and Interests Protection Law that was published in December 2021 and solicited advice from the public in China. However, in order to implement change, the group calls for “making education resources available for school girls, socializing care and rewarding domestic labor, and putting in place legal protections and the security net for gig workers.”

CLW also notes that, although its report focuses on rural women migrant workers, the problems it highlights are “not limited only to this specific population group, as the systemic problems examined here are similarly [faced by]women of different class backgrounds, rural migrant workers, and gig workers in China and elsewhere, and their effects are not limited solely to rural female migrant workers.”

While CLW’s latest report focuses specifically on conditions faced by female factory workers, it also fits into a broader context of poor working conditions in some Chinese factories, including those that manufacture products for the printer and supplies industry. In December 2021, CLW published findings from its investigations of two cartridge factories located in Zhuhai, China. “Abuse in the Printing Supply Chain: An Investigation into Two Cartridge Manufacturers,” CLW’s first-ever report on conditions at China’s third-party consumables factories, details the long hours and demoralizing working conditions that factory workers endure assembling third-party cartridges in China and the meager pay they receive for their efforts (see “China Labor Watch Finds Bleak Working Conditions at Certain Chinese Cartridge Factories” and “China Labor Watch Describes Conditions at Cartridge Plants as Some of the Worst in China”).