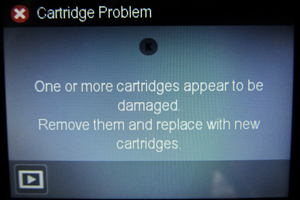 Users of some third-party inkjet cartridges are once again seeing their HP inkjet printers display this error message.

Multiple reports indicate that a new HP inkjet printer firmware update is once again preventing certain aftermarket inkjet cartridges using third-party chipsets from working in HP printers. After the firmware update, users of certain non-OEM inkjet cartridges reportedly see their printers display the same error message that caused headaches for consumers and outrage among the media last year. The error message declares, “One or more cartridges appear to be damaged. Remove them and replace with new cartridges.”

As many will recall, one year ago, on September 13, 2016, a “dynamic security feature” installed in an HP inkjet printer firmware update from earlier in the year went live, causing certain third-party inkjet supplies to stop working in various OfficeJet, OfficeJet Pro, and OfficeJet Pro X inkjet devices (see “HP Inkjet Printer Firmware Update Disables Some Third-Party Inkjet Cartridges”). Affected HP printer models were those that used the HP 934/935, HP 950/951, and HP 970/971 cartridge families. There was an uproar in the media over the move (see “HP Firmware Update Continues to Spark Consumer Outrage, Aftermarket Solutions”). Ultimately, HP apologized and offered a firmware fix, although HP indicated that it would continue to use similar authentication technology to protect its intellectual property (see “HP Apologizes over Aftermarket-Cartridge-Killing Firmware Update, Will Offer Fix for Affected Customers”). Several class-action lawsuits were filed against HP over the firmware update. (For the latest in these class actions, which have been consolidated, see “Hearing Held on HP’s Motion to Dismiss Printer Firmware Class Action.”)

One big difference, however, is that this year there is an immediate fix, and it is the same one that HP eventually offered users last year. Ghacks.net says end users can go to the HP Customer Support website to download firmware that removes the dynamic security feature. The site advises that customers who wish to avoid such issues in the future block HP’s automatic update functionality or switch to another printer brand.

Tech websites are already once again criticizing HP over the move. Gizmodo posted an article titled, “One Year After Bricking Third-Party Ink With Update, HP Is Back on Its Bullshit.” In an article called, “HP Once Again Caught Sneaking Code into Printers to Reject Third-Party Ink,” Boing Boing declared, “HP has once again been caught pushing out a fake ‘security’ update for its printers that secretly turns on the anti-feature of checking for and rejecting third-party ink.” Tech Radar states, “This is the second time the company has been caught using these same tactics against its customers.” Most of these articles cite the Ghacks.net post as their source. We have been able to confirm, however, from Static Control Components and inkjet refillers and remanufacturers that HP did indeed push out a firmware update this week.

Actionable Intelligence reached out to HP for more information. The company provided us with the following statement:

Dynamic security is a process that authenticates supplies to prevent the use of supplies without an Original HP chip. HP includes dynamic security to: 1) protect the quality of our customer experience from potential functionality risks that can be introduced using cloned chips, 2) protect HP’s intellectual property, and 3) reduce counterfeiting of HP supplies and warranty fraud. HP printers and original HP cartridges deliver the best quality, security and reliability.  When cartridges are cloned or counterfeited, the customer is exposed to quality and potential security risks, compromising the printing experience.  Refilled or remanufactured supplies that use an Original HP Chip are unaffected by dynamic security and will continue to function normally. Other cartridges (e.g., cartridges using cloned chips) may not work today and/or may not work in the future.

This statement is not new and is the same statement HP provided us with when we asked the company about a firmware update for PageWide inkjets earlier this year (see “HP Updates Firmware for PageWide Devices: What Does It Mean?”). HP did not share more details about why it recently updated its printer firmware for OfficeJet, OfficeJet Pro, and OfficeJet Pro X devices.

Static Control tells us that HP did “push a firmware update of old firmware” this week. In a September 13 email technical bulletin to customers entitled “HP Ink Jet ‘Cartridge Problem’ Errors,” the component maker warned, “Some customers that had no issues yesterday make have woken up with ‘Cartridge Problem’ errors today. This affected printers that use the 934/950/970 cartridges.” Static Control advised its customers to update their printer firmware and that doing so would “restore full cartridge functionality to affected printers.” The company linked to HP’s Support site for the firmware download to fix this issue.

Among the questions we posed to HP that the company has yet to answer is why the firm issued another firmware update that locks out aftermarket cartridges on the same exact date one year after last year’s “dynamic security” feature went live? We noted the move seemed deliberate and asked what message once again pushing a third-party cartridge-killing firmware update on September 13 was meant to send to customers and HP’s competition in the aftermarket?

While we do not know if HP will choose to answer these specific questions, we must note that when HP Jon Flaxman, HP’s chief operating officer, issued HP’s official apology about last year’s firmware update, he stated, “We will continue to use security features to protect the quality of our customer experience, maintain the integrity of our printing systems, and protect our IP including authentication methods that may prevent some third-party supplies from working.”

In other words, nobody should be surprised here. HP has clearly stated that it will continue use firmware updates and the “security features” therein in ways that might prevent third-party supplies from working, and that is exactly what HP has done.

As for HP’s motivations, we think we saw the clearest expression of those in the firm’s motion to dismiss the consolidated class action brought against it over last year’s firmware update. In its motion to dismiss, HP stated, “[The] plaintiffs’ case is built on the false premise that HP is under an obligation to make its printers compatible with any and all third-party ink cartridges. In fact, HP is under no such inherent legal duty.”

[UPDATE (10/13/17): After the publication of this article, HP provided Actionable Intelligence with a statement on this matter. For more information, see “HP Shares Insight into What It Is—and Isn’t—Doing with Dynamic Security in Its Inkjet Printer Firmware.”]