In July and August, original equipment manufacturers (OEMs) of printers and MFPs announced their financial results for the three-month period ended June 30, 2022. If this quarter has a theme, it is the caveat. In examining companies’ financial results, “yes, buts” abound. 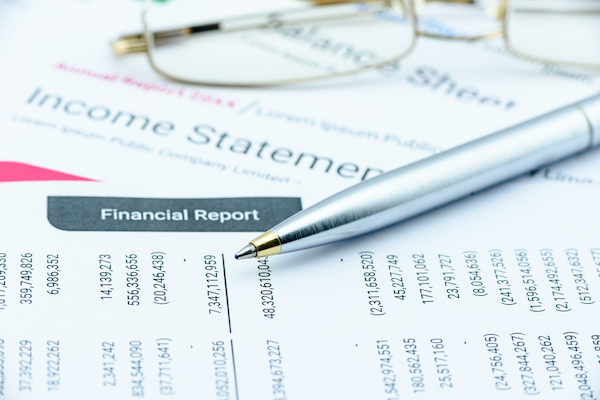 More OEMs were able to post revenue and profit growth in the quarter ended in June 2022 than in the past couple of quarters, but not all of them did. One major reason for certain Japanese OEMs’ year-over-year improvements was not organic growth but rather how much the yen has depreciated against other world currencies. In constant currency, many OEMs would have seen much lower growth rates or in some instances declines. In contrast, for the two U.S. printer/MFP makers, HP and Xerox, currency exchange was a headwind this quarter.

OEMs have put in place measures to deal with the ongoing chip shortages, production challenges, and transportation delays. As a result, OEMs saw some improved product availability. Still, backlogs remain enormous for many OEMs. Some OEMs like Konica Monta are using air freight more frequently to get product like toner to customers. And that has led to higher costs. But higher costs are everywhere.

In recent quarters, as costs for chips, other components, raw materials, and transportation have soared, we have seen lots of OEMs talk about taking pricing actions. That remains the case, and prices on hardware and supplies have risen—as have prices for just about everything else in this inflationary environment. The fact that OEMs have been able to hike prices and that customers have still been willing to pay them due to products being in short supply has been a major benefit to manufacturers in recent quarters, enabling them to help offset the impact of lower sales and rising costs on margins. But there were some signs this past quarter that we may have finally hit a point at which rising prices are leading to less demand, at least in the consumer market. HP, for example, said it is seeing inflation negatively impact consumer demand. It certainly seems that the strong consumer demand that fueled some OEMs’ small-office/home-office (SOHO) businesses last year has been losing steam.

Meanwhile, most OEMs said that office demand is improving but only gradually. It appears that workers’ return to the office has been slower than many had hoped. And there is a growing realization among manufacturers that print volumes in the office will simply never return to pre-COVID levels. Several OEMs focused on the A3 MFP business have discussed in recent quarters how they expect page volumes and/or non-hardware sales to recover to only about 80 to 85 percent of where they were before the pandemic. And given the ongoing focus among businesses on digital transformation initiatives that replace paper-based processes and workflows, the trend is not favorable for office printers, MFPs, and supplies over the longer term. OEMs, of course, want to provide customers with the services and solutions needed for digital transformation, but whether this will provide enough new business to offset declines in sales of hardware and supplies remains an ongoing question.

Actionable Intelligence currently covers financial results for the following printer OEMs: Brother, Canon, Epson, Fujifilm, HP, Konica Minolta, Kyocera, Ninestar, Ricoh, Sharp, Toshiba Tec, and Xerox. For all the Japanese OEMs, except Canon, the period from April 1, 2022, through June 30, 2022, was the first quarter of the fiscal year ending March 31, 2023. For Canon, U.S.-based Xerox, and China-based Ninestar, this period was the second quarter of fiscal 2022. HP is on a different financial calendar than all the other OEMs. Its third quarter of fiscal 2022 ran from May 1, 2022, through July 31, 2022. Here, we look specifically at the performance of OEMs’ business segments that include home and office printer hardware, supplies, and related software and services.

Figure 1 presents a snapshot of the financial performance of OEMs’ printing businesses for their most recent quarter. Readers should bear in mind that while the segments shown are those that include OEMs’ home and office printing hardware and supplies businesses and related software and services, OEMs include other business lines in these segments, too. Most notably, Sharp includes its enormous TV business in its 8K Ecosystem Business. Meanwhile, because Ninestar is focused on home and office printing with the exception of a portion of its chip business, we show results for Ninestar as a whole. 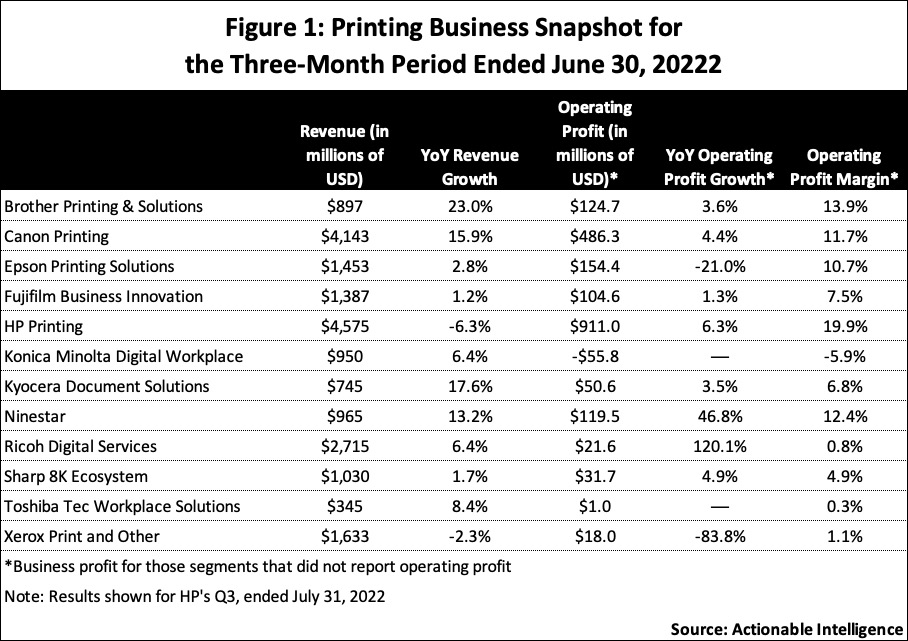 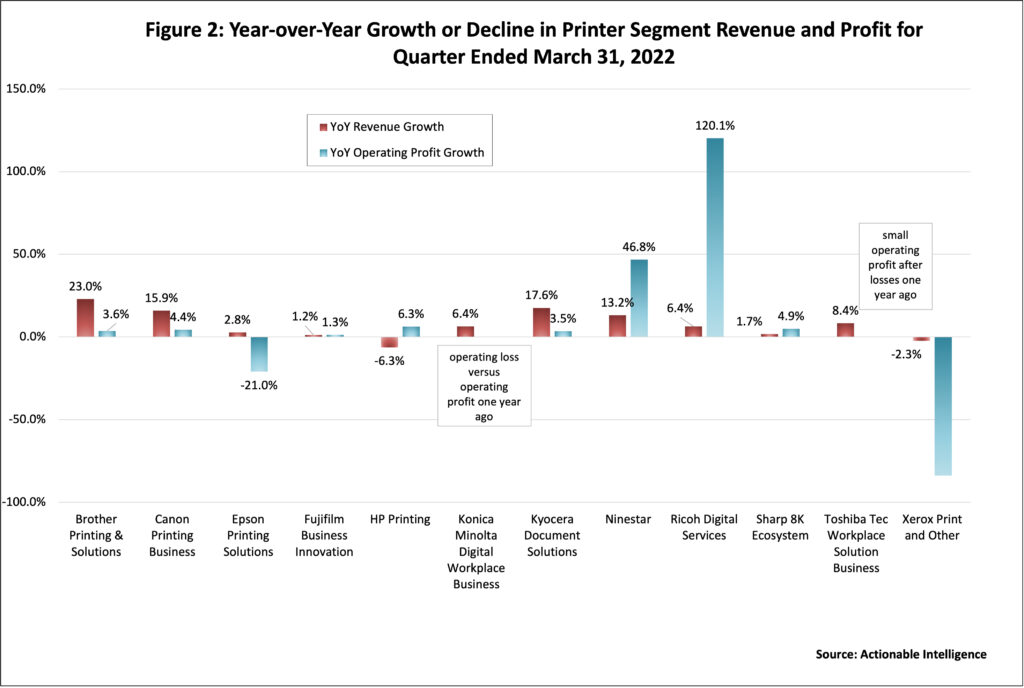 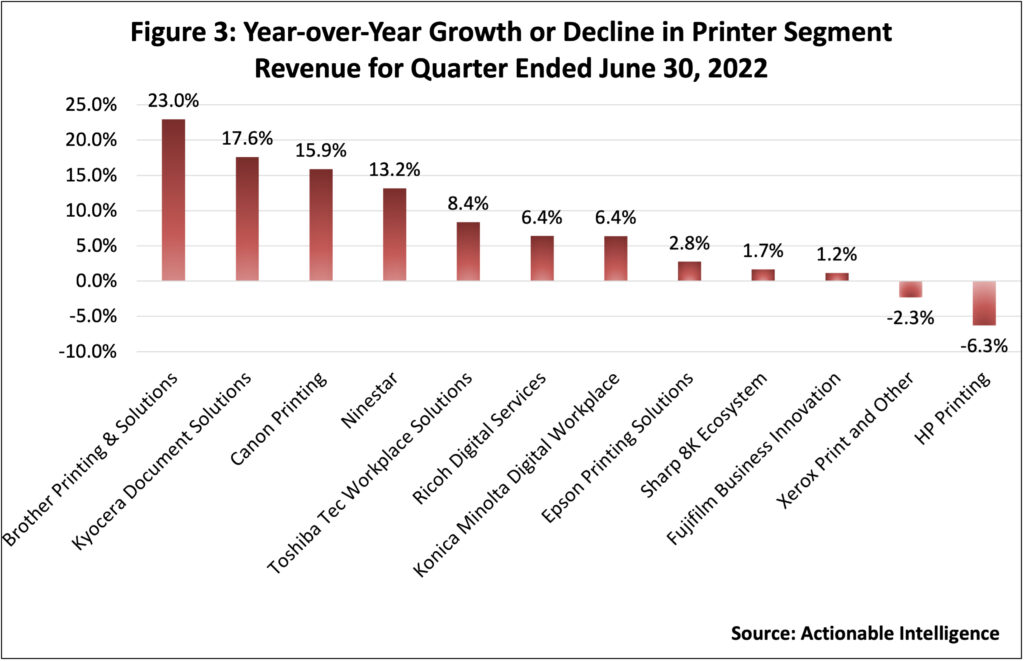 Figure 4 shows the year-over-year percentage change in segment operating profit, from best performers (Ricoh Digital Services and Ninestar) to those seeing the biggest percentage declines (Epson Printing Solutions and Xerox Print and Other). It is not possible to show percentage growth/decline for Toshiba Tec Workplace Solution Business or Konica Minolta Digital Workplace Business. In Toshiba’s case, the segment had a small profit but it had a loss in the year-ago period. In Konica Minolta’s case, it is because the segment had an operating loss in the most recent quarter and, in fact, was the only one of these segments with a loss. That means Konica Minolta Digital Workplace Business is actually the worst performer in terms of profits this quarter. 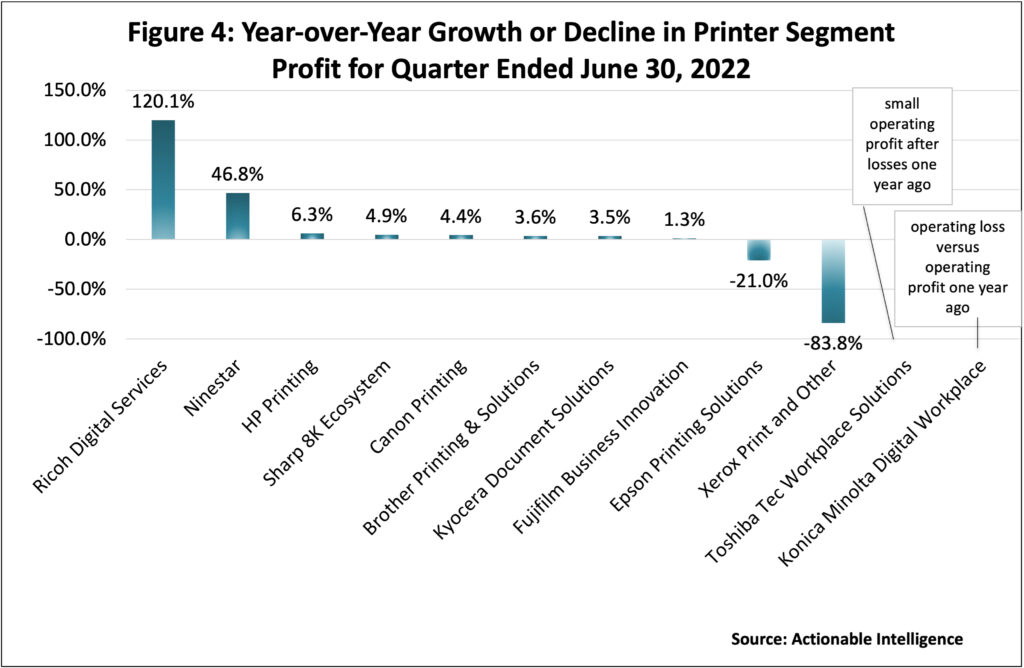 Figure 5 shows how much revenue in U.S. dollars each OEM’s printing business generated in the quarter ended on June 30, 2022. HP Printing and Canon Printing remain the biggest print-related businesses in terms of total revenue while Kyocera Document Solutions and Toshiba Tec Workplace Solutions remain the two smallest. While there has been some reshuffling in the middle of the pack, there are seasonal patterns at play here. One thing to note, however, is that Ninestar appears to be steadily moving up the ranks in terms of total revenue due to both organic growth but also to the fact that the firm closed on the acquisition of 100 percent of Pantum last year. 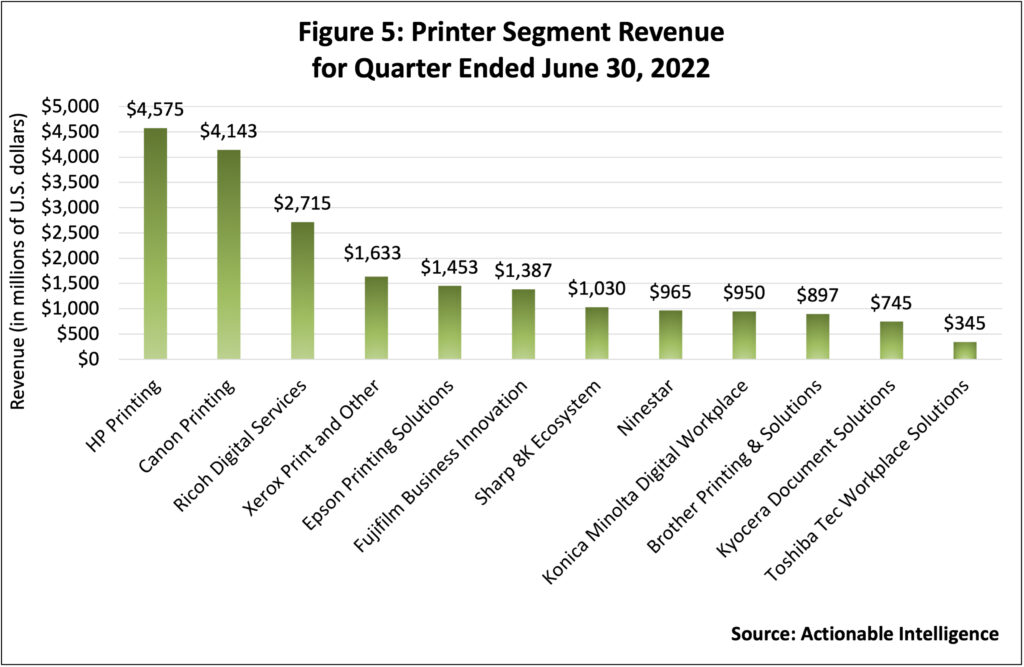 Figure 6, which shows the OEMs’ printer segment profits in U.S. dollars, is a good reminder that strong year-over-year growth rates don’t necessarily translate into lots of money. For example, in Figure 4 we saw that Ricoh Digital Service had the strongest growth rate for operating profit, but that translated into just $2.6 million in operating profit. Meanwhile, HP and Canon had much lower operating profit growth rates, but their operating profits dwarf those of rival vendors. Konica Minolta’s Digital Workplace Business was the worst performer in this area this past quarter with a $55.8 million operating loss. 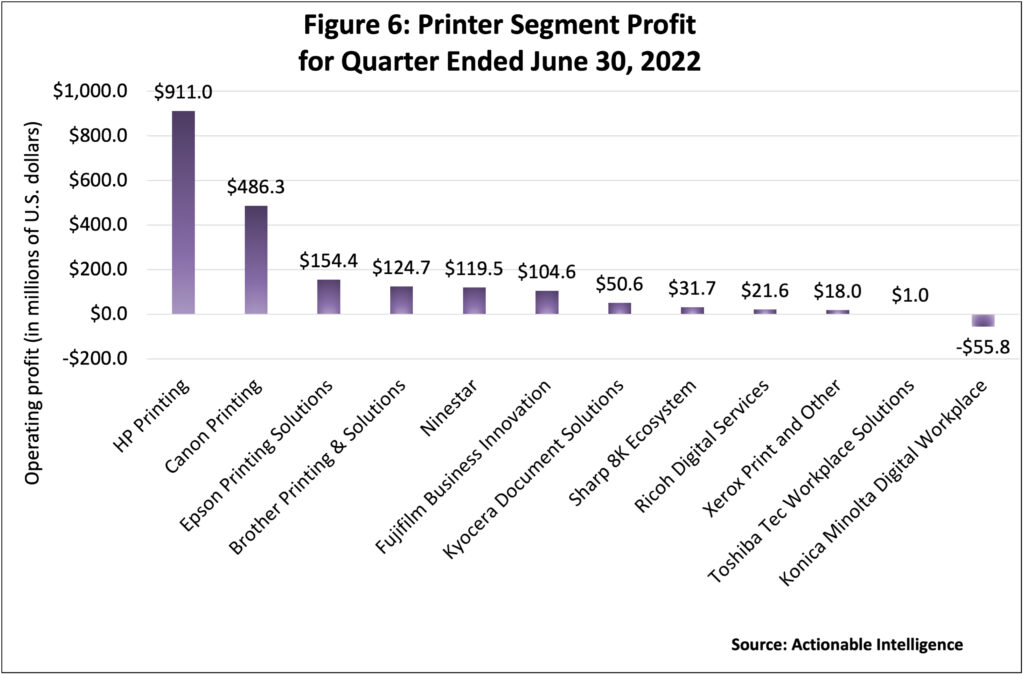 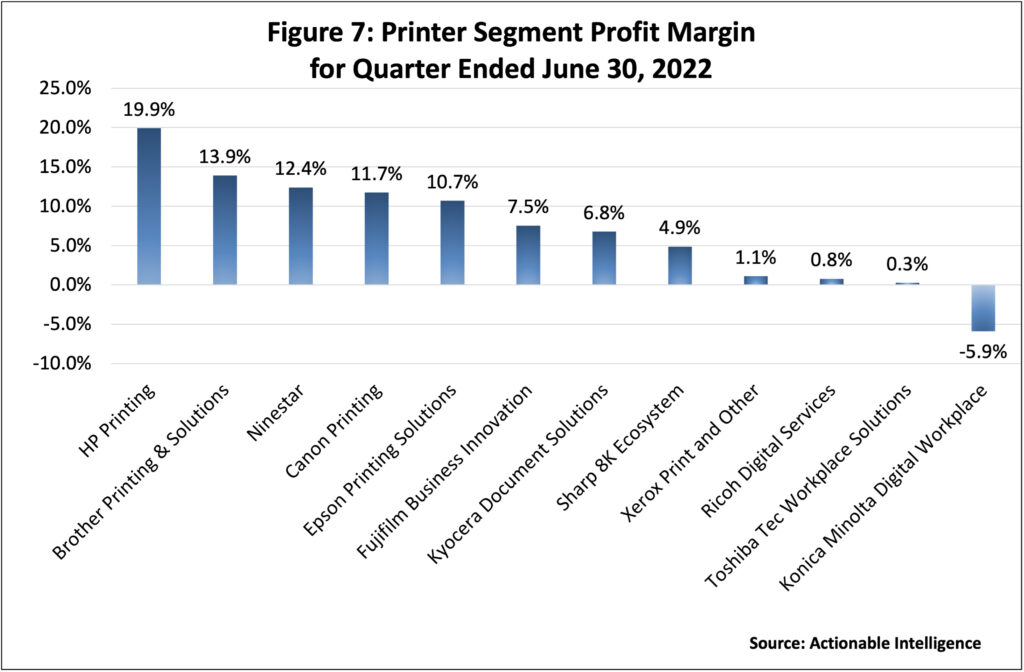 Below we have summarized the performance of the various OEMs we track, keeping the focus on their home and office hardware and supplies businesses. For more information, click on the links below to access our detailed coverage of these companies’ financial results.

With their latest financial results announcements, five OEMs adjusted their forecasts for the year ahead (see Figure 8). Canon, Epson, and Fujifilm adjusted their outlooks for company revenue, operating profit, and net profit upward. Konica Minolta raised its revenue guidance for the year. A major reason for these firms’ upward revisions is that the yen depreciated more than anticipated. HP, however, revised its guidance in the other direction, lowering its earnings per share (EPS) guidance due to its concerns about the global economy, the softness it is seeing in the consumer segment, and expenses associated with its acquisition of Poly (see “HP Completes Poly Acquisition”). 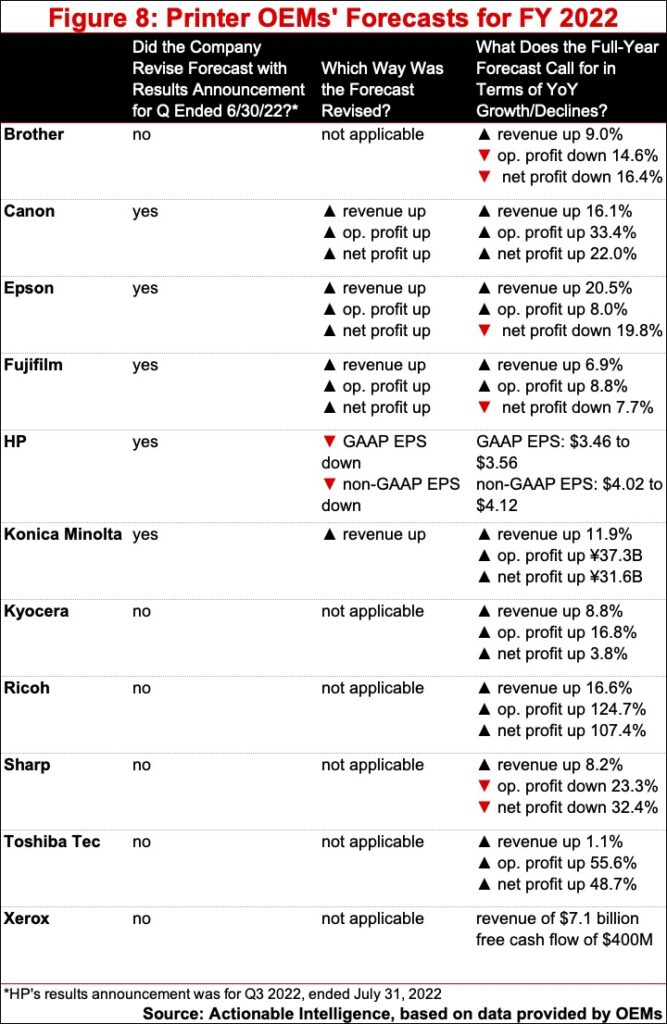 Despite the fact that many OEMs saw improvements in the quarter ended in June and all the upward forecast revisions, most OEMs adopted a cautious tone in discussing their performance in the remainder of the year ahead.

If there was a word uttered time and again this quarter, particularly in regard to companies’ forecasts, it was uncertainty. OEMs said the outlook is uncertain whether they expect a year of growth or declines and whether they revised their forecasts upward or downward or left them unchanged. That isn’t new, of course. Ever since the global pandemic cratered the industry, OEMs have expressed concern about how uncertain the future looks. But this quarter, we saw a growing chorus of voices express concern about the business impact of geopolitical conflicts and potential conflicts, COVID-19, and whether there will be regional recessions or even a global recession that might crush hopes of a return to the office and a gradual recovery for OEMs’ office businesses.